At Mythic Championship II in London, Wizards of the Coast will experiment with a new mulligan rule. This so-called London mulligan rule says that when you mulligan for the Nth time, you draw seven cards, then put N cards on the bottom of your library in any order.

In addition, from April 10th to May 1st, the London mulligan will be used in all formats on Magic Online. The resulting data will help R&D make a determination whether to adopt this mulligan for Magic as a whole. Moreover, it will allow Mythic Championship competitors to practice their Modern game under the same conditions that they’ll face in London.

In a previous article, I already showed that the London mulligan rule mathematically benefits strategies that rely on specific cards. This article already indicated that Serum Powder could boost certain strategies, and today I want to expand on this. 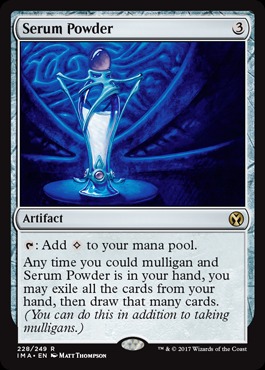 So Serum Powder decks get better, and this is amplified when they contain cards that abuse the exile zone. 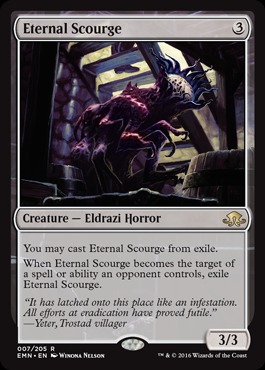 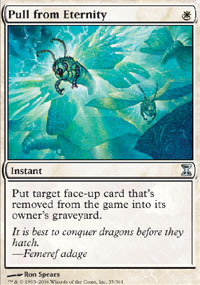 If you exile Eternal Scourge, then it becomes a free card. And if you exiled a big legend, then Pull from Eternity becomes Entomb. Before showing some deck lists with these cards, let’s run some numbers.

We mulligan according to the following rules:

Then, after you’ve kept, exile one Eternal Scourge to one Gemstone Caverns if possible. The underlying assumption that you’re always on the draw is inspired by the Goryo’s Vengeance deck that prefers being on the draw. Given these rules, one million simulations yields the following results:

In a format where a couple percent can represent a huge edge, these differences are substantial. Under the new mulligan rule, you will not only find key cards more often and keep larger hands on average but also you will be able to start the game with exiled Eternal Scourges more frequently.

Let’s turn to the deck lists.

This deck plays the best Eldrazi creatures in a mana base filled with utility lands. And thanks to Simian Spirit Guide, Serum Powder, and Gemstone Caverns, it can play turn-1 Chalice of the Void quite often. A Chalice for X=1 can lock out all opposing Faithless Lootings, Lightning Bolts, or Ancient Stirrings, and it doesn’t hurt yourself at all.

Since Chalice of the Void is particularly effective against Izzet Phoenix, Colorless Eldrazi has already risen in popularity in recent months, but the London mulligan rule should make the deck even better.

The main plan of this deck, inspired by nj4u1’s list, is to put Narset or Giselbrand into the graveyard on turn 1, followed by Goryo’s Vengeance on turn 2.

This is a prime example of a deck that gets better under the London mulligan rule. You can find Goryo’s Vengeance more consistently, and moreover you can put nonsense like Enter the Infinite on the bottom after a mulligan.

I played 20 games with the main deck last weekend, and I got the following results against non-interactive decks:

Winning on or before turn 3 in 80% of the games is ridiculous against decks with little-to-no relevant interaction, such as Izzet Phoenix or Dredge. They are practically a goldfish, and you are much faster than they are. Decks with Thoughtseize, Relic of Progenitus, or Thalia, Guardian of Thraben pose more of a problem, but it’s still possible to beat them a decent amount.

The problem comes after sideboard, when you will face Leyline of the Void, Rest in Peace, and other hate cards. While you could bring in four Nature’s Claim and call it a day, it’s tough to mulligan into both Nature’s Claim and a functional hand. It’s already difficult enough to find Goryo’s Vengeance, a way to put a legend in your graveyard, and enough lands in game 1. If you have to find enchantment removal as well, then it becomes overly difficult. It’s just too many pieces. And to make matters worse, when they keep a hand without Leyline, your arduous Nature’s Claim is useless!

That’s why my sideboard also contains Through the Breach as an alternative plan that doesn’t use the graveyard. Additionally, I have Sultai Charm and Nahiri, the Harbinger as answers to Leyline and Thalia that help set up your combo if they don’t have the hate card. As casting some of these cards with a 15-land deck is problematic, I added several copies of Devoted Druid. And since I tend to cut several Enter the Infinite, Conflux, and Omniscience to make room for all this, I replace most Narsets with Emrakuls to combo with Through the Breach. Other cards that could be shaved while sideboarding are some number of Pull from Eternity, Spoils of the Vault, and/or Serum Powder.

This sideboard is currently a bit of a mess, but the potential is there. Narset Combo is the type of mulligan-exploiting deck that could dominate the Mythic Championship if anyone can figure out a good build with a proper sideboard plan that sidesteps the hate.

In any case, if you want to exploit the London mulligan rule from April 10th to May 1st on Magic Online, then give Colorless Eldrazi or Narset Combo a try!