War of the Spark is brimming with potential. Among the many cards that seem pushed for Constructed, Finale of Promise caught my eye. 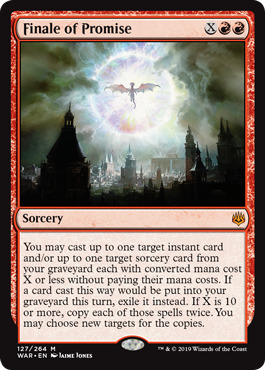 Forget about the “if X is 10 or more” trinket text for now and focus on the mid-game. Suppose you have Lava Spike and Lightning Bolt in your graveyard. Then Finale of Promise effectively deals 6 damage for 1RR. That’s a great rate for a single card. And if you flash back Serum Visions and Opt, you’ve effectively created one of the best red card draw spells of all time.

What makes Finale of Promise even better is that it casts the cards from your graveyard. This means that Finale of Promise can bring back Arclight Phoenix by itself, trigger Runaway Steam-Kin or Guttersnipe, or trigger prowess three times.

Consider this sequence, for example:

Turn 3: Mountain, Finale of Promise, recast both spells, attack. Opponent down to 0.

The probability of getting this sequence is less than 2%—I ran the numbers—but like any four card combo, it’s not completely outside the realm of possibility.

How Many Instants and Sorceries Do You Need?

Finale of Promise can be very powerful if you can cast two spells. But if your graveyard contains only a sorcery with no instant, or vice versa, then it’s like a bad Snapcaster Mage without the 2/1 attached. That wouldn’t be worth it. So your deck really needs to be able to find both card types with sufficient consistency.

The following table shows the probability of drawing at least one instant and at least one sorcery in your top 10 cards (i.e., by turn 4 on the play) in 60-card decks. It’s just a quick multivariate hypergeometric calculation without any conditioning, but it should be insightful enough.

To get sufficient value out of Finale of Promise, I’d say that you need to be able to target two spells in the mid-game at least 85% of the time. Using the table, this corresponds to 13 sorceries and 13 instants. If you’re curious: An 11/15 split would also still work, but a 10/16 split would dip slightly below 85%. In any case, you shouldn’t count Finale of Promise itself among the sorceries.

A deck with an abundance of card draw spells could lower the instant and non-Finale sorcery count a bit further, but I would be hesitant to go below 10 copies of each.

What is a Good Home for This Card?

Mono-Red Phoenix in Modern should be able to put Finale of Promise to good use. All of its creatures benefit when you cast instants or sorceries, and the deck has a good mix of both. The following list has 14 non-Finale sorceries and 13 instants.

Where do you see Finale of Promise fitting in?

Share this
Tags: Finale of Promise, Mono-Red Phoenix, War of the Spark