Since the inception of the Brawl format, the list of available commanders has left a few color combinations beyond reach (and no, playing Jodah, Archmage Eternal doesn’t actually count, in my mind). The new cycle of Elder Dragons, however, is a refreshing change of pace. For the first time, we have access to Bant and Esper commanders in Brawl!

As a rusted-on white-blue mage, I’m over the moon about the horizons being expanded in these directions. After seeing both Chromium, the Mutable and Arcades, the Strategist, I was very excited to smash with new takes on white-blue-based decks in Brawl.

Chromium looks to be an excellent, resilient finisher in any control deck. The combination of flash, uncounterability, and a built-in self-protection mechanism all work well together to close out games that are otherwise locked up. And, unlike when you’re just brawling with The Scarab God or Teferi, the full range of Esper colors are available!

There are two significant problems with this deck. The first is the mana base—constructing a reliable 3-color Brawl mana base is a difficult task. In my weekly Brawl podcast, Stacking Sixties, Jamin, Toffel and I talk about this exact problem. As touched upon in that episode, I decided the best approach was to build a 2-color deck with a splash for the third color. In this case, my Chromium deck ended up as a white-blue deck splashing black for haymakers like The Scarab God and Profane Procession.

The second problem is that this deck just might be better as straight white-blue Teferi Control. I’m keen to jam games with Chromium, as I think the black splash might do a lot of work in certain situations (there’s no doubting the power level of the cards it enables), but ultimately, I’ll have to honestly evaluate whether this is just a worse Teferi deck.

Whereas Chromium is a somewhat generic control finisher, Arcades is a super-sweet build around that is sure to spawn some wonderfully weird brews as people try to exploit the butt-fighting ability of this mighty Dragon. Unfortunately, I don’t think this is going to happen in Brawl. At the current moment, there are only eight Standard-legal defenders that can be played in a Bant deck, with only three more arriving in Magic 2019. This, obviously, is nowhere near enough to build a sick defender deck, as sweet as 1-mana 3/3s and 2-mana 5/5s might be.

Instead, the Bant colors enable a green-based ramp deck that curves into massive blue and white threats. Happily, many sweet ramp cards are green-blue (Weaver of Currents, Spring // Mind) and white offers some much-needed interaction (Cast Out, Angel of Sanctions). At the end of the day, who doesn’t love casting 8-drops? Sandwurm Convergence and Overwhelming Splendor, incoming!

One of the upsides of this 3-color Brawl deck is that it largely ignores the mana issues, thanks to cards like Grow from the Ashes and Hour of Promise. Obviously, there are some tricky double-cost cards, but broadly speaking, the green ramp spells help to smooth out any wrinkles your mana development may have.

The mana dorks in this deck, too, can often punch above their weight. Shalai, Voice of Plenty, is terrific in beefing them all up to a respectable size, as is The Immortal Sun. The biggest issue facing this deck is the classic pitfall of ramp decks everywhere—drawing all enablers and no action. Thankfully, blue cards like Spring // Mind and Commit // Memory are here to help dig to massive threats. It’s another reason to appreciate the addition of a third color.

Moving forward, I’ll be keeping a close eye on any and all defenders that are printed to see if the Arcades deck that Garfield intended for us to play with actually emerges. In the meantime, I’ll be happily ramping out Sandwurm Convergence while my 3/5 holds down the fort! 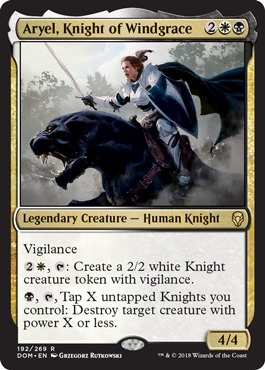 A few weeks ago, I wrote about my Knights list in Brawl, led by the mighty Aryel, Knight of Windgrace. I’ve had a great time with this deck. I bring it to spellslinging at every GP I attend, and I’m looking forward to updating it further with some cards from M19. Right now, here is what the deck will look like once M19 arrives.

Some pretty lackluster 2-drops come out—goodbye, Paladin of Atonement and Famished Paladin—and some slam-dunk new faces get the nod. Valiant Knight is an obvious inclusion, and while Lena, Selfless Champion makes Soldiers rather than Knights, her effect is still enormously strong and warrants inclusion, just like Elenda, the Dusk Rose.

Sigiled Sword of Valeron generates tokens, but also has the upside of turning random Vampire tokens into noble Knights to be buffed by Radiant Destiny and the like. Beyond these cards, there’s not a whole lot going on—the only other card I might look to include is Blood Divination, given the number of tokens flying around. But the card is pretty questionable, and in more ways that one. Surely a Divination of any kind should draw two cards, not three?

The addition of the Elder Dragons into the Brawl format will be sure to change things up a little bit, especially as we now have two new color combinations to work with (and no, Jodah, Archmage Eternal still doesn’t count). I’m excited to see what other new technology comes of these new additions!