If you think that you’ve had bad punt days playing Magic, wait until you hear my story. The worst part about the story is that it happened during a team GP.

We had a pretty good Day 1, going 8-1 with a fine-but-not-spectacular pool, but we all had tight, interesting games and managed to squeeze some wins out of very uncomfortable board situations with some nice plays.

After opening another slightly above average pool on Day 2, we lost round 1, which was already kind of a bummer. Round 2 started sub-optimally as well. I had to mulligan and never found lands to play any spells in my first game. I won game 2, but had to mulligan again for game 3. I kept my 6 cards and peeked at the top card of my deck, pondered for a while, and kept the card on top. My opponent played a land and passed, I drew the card I already knew, pondered some more on what I needed to draw in order to get into the game, and passed the turn.

When my opponent played his second land, I noticed that there was no land on my side of the battlefield. I just forgot to play one. Ouch! I tried to keep calm, tried not to unsettle my team, and focused on my game, but I had no chance of coming back. I think without my mistake, I could realistically have won that game. After our team lost the round 1-2, I told them about my punt. Normally I don’t care a ton about my punts after the initial moment of frustration, but when your whole team has to suffer the consequences, it just feels very bad. My teammates did a great job of encouraging me and talking down what happened, but the loss was just the beginning. We ended up going 0-4-1 on Day 2. Misfortune accompanied the bitter aftertaste of my brain fart.

When I came home, after some traveling hours overthinking how a mistake like this could even happen and if I should stop playing Magic now, I had to draft some Iconic Masters on Magic Online to ease my pain. And believe it or not, my first round opponent mulliganed to 6, and missed his first land drop too. Isn’t it ironic, don’t you think? I decided to keep on playing Magic…

Spoiler: I think my opponent kept a Karoo land hand after mulligan, scryed to the bottom, and didn’t find other lands.

Before playing some Theros GP, we did a side event Draft to get into the right mood. I opened a Stormbreath Dragon, one of the best cards in the set, and the most valuable card in Theros. I won the Draft and earned some jealousy from my roommate Mat for my infinite luck. I decided to double up and snuck the Stormbreath Dragon I just drafted into one of my prize packs. Then I turned back to Mat and told him that I felt like challenging fortune once more, tore the prepared booster open in front of him and fished the Stormbreath Dragon out of it. His face turned red and he walked away in disgust, shaking his head while cursing my infinite luck once more. Well, I was curious to see what hid in my pack as its actual rare.

It was another Stormbreath Dragon.

I was playing a Chaos Draft at my local store, the store I started playing Magic at like 18 years ago. I was in a good mood, and I sat beside a player I didn’t know yet but who seemed like a nice guy. After we had some fun drafting our first two packs, he picked up his third pack, Modern Masters. He picked a random uncommon and passed me a Snapcaster Mage. Important note: We keep the cards we draft. Snap-pick. And I started considering how to move on. I was pretty sure he had no clue that he just passed me some good money, but I didn’t want to expose my neighbor by mentioning his pick. I was torn between not telling him at all or just giving him the Snappy after the Draft. In the end, I told him about the value of Snapcaster in private after the Draft, and offered him half the prize of the card after selling it. He was happy about it, so it seemed like a classic win-win. Still, I was unsure what a “fair” handling of this situation was at a casual fun event like this. I would love to hear your thoughts about it. 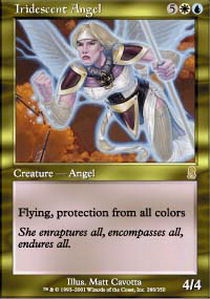 When I was young, I regularly did these preview marathons. I started with a midnight preview on Friday night, progressed with some Drafts in the morning and another Sealed event during Saturday afternoon and evening, and wrapped it up with another prerelease at Sunday. After 40 hours of Magic without much sleep, my mind was usually pretty devastated. I remember eating pasta one Sunday evening and wondering if the spaghetti had haste. One similar experience was that after one of these sessions I dreamed about how I married Iridescent Angel, which I played at one of my previews. When I told the story to my preview marathon fellow, he laughed out loud and stated that he dreamt the same thing this night, with the main difference that he had to marry Braids, Cabal Minion. Considering the options, I still stand to my pick. 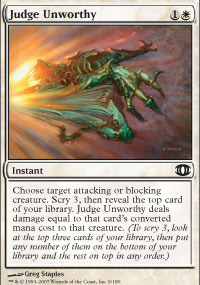 While I was on the train for Pro Tours, I head judged some PTQs. I was experienced with the rules, but to be honest, I was lost with some other judge topics back then. We were in the quarterfinals of our event, and a good friend of mine was up 1-0 against a French player. When I walked by the match, my friend had his opponent dead on board. I checked the other matches and came back to congratulate my friend, who was shuffling his cards and talking to his opponent. I made a statement in German about the interesting board situation he was in and about the sweet line to victory, but after a weird look from both my friend and his opponent, I noticed that my friend actually lost that game because he didn’t see the line I just told him about. I had to apologize and explain to the French player who didn’t actually understand German what just happened. He reacted angrily, which I fully understood. He said he would have appealed to the head judge for outside assistance, but since the head judge was me, he couldn’t, and I couldn’t do anything about it as well. I felt terrible and was very sorry, and fortunately, the French player ended up winning the PTQ in the end, so he wasn’t mad at me after the event.

I heard some fun refund stories for Magic Online events. A guy once complained about losing to Pack Rat multiple times in a PTQ and got refunded for it. I had some ups and downs with refunds on Magic Online, being on the wrong end of policies several times, but also getting some generous refunds now and then. I was recording a 10 Rare Challenge video for a German site, but ended up with only 7 rares. I opted to drop from the Draft and record another one, but before I did, I wanted to give my first round opponent the pleasure of playing against a 10,000 card deck. So I literally added tons of lands, but couldn’t get over 1,500. So I contacted support, complained about it, and actually got a refund for the event.

Team trio events were always a blast. I happily remember team events back in the days where you could choose your own team name. My favorite tournament was the one where we dressed up as the Chipmunks and had a radio with us to play the Chipmunk soundtrack whenever we would arrive at a table. Unfortunately, the tournament organizer confiscated the radio after round 1. It was also a good subgame to guess how old our opponents were after reading their team name and how good they were at Magic.

I remember a bigger tournament, I think it was a GP or PTQ back in the Onslaught block days, when a team registered with the name *Bye* . They actually won two rounds without playing since their opponents didn’t show up, thinking they had an actual bye and went out to eat something or take a break. After the tournament, the team was told not to use the name again. And soon after, Wizards stopped the whole team name thing. Maybe there were similar situations at other events.

I started doing these on GPs and Pro Tours when I was out of contention for money on Day 2. My goal was to rare draft and play a deck with 10 rares in it—the bonus goal was to win some games with it. It was good value to draft all the rares anyway, and the look on the faces of my opponents was priceless. One of my first 10 Rare Challenges I did was during a PT after a 1-4 in the Constructed part —back then you needed a 5-3 to make Day 2.

I drafted a sweet 4-color deck with 3x Dark Tutelage, removal, and lots of life gain. The deck didn’t win a single match, but it was entertaining to play and felt better than I originally thought. After a successful 10 Rare Challenge in Innistrad, I won a game at a Grand Prix by curving Screeching Skaab, milling two off-color rare creatures, trading away the Skaab, and slamming Skaab Ruinator, cast off Stensia Bloodhall, Hinterland Harbor, and Island. After this win, I started recording 10 rare videos for a German site, creating a true monster in my very first recorded Draft, which could cast Increasing Ambition for Alpha Brawl or combo off with Parallel Lives, Back from the Brink, and Manor Gargoyle. We went 2-1, losing the finals, experiencing a whole lot of rare interactions we had never seen so far. Many Swiss, German, and Austrian players joined in the nonsense and started recording the challenge too—Innistrad was actually a great format for it. To this day, my last achievement to unlock would be to convince LSV or Conley Woods to join the fray as well. Hopefully not in Ixalan, though…

These are bonuses, since I already wrote about them on CFB, but they’re always good enough to bring back: