What do all robots have in common? Exploitable weaknesses: The trick to pwning robots has always been learning their weakness and spamming it to victory. Since I wrote my MTGA RIX guide I’ve gotten to 7 wins in my last four Drafts (28-6) with a wide range of decks (G/W, U/G, U/B, U/W). I’m nearly diamond in Limited and getting significantly better results playing against tougher opponents.

What’s the secret to my success? Simple:

I’ve come to realize the robots are idiots and I treat them with zero respect.

It doesn’t matter if you are just getting into Magic on Arena or if you are seasoned Drafter because today’s approach is simple, straightforward, and will have you fielding better Draft decks, pronto.

How Arena Draft is Different From Traditional Draft

Let’s start with the basics of Draft, if only to make the distinction that a huge chunk of what has traditionally and historically mattered in Limited play does not currently matter while climbing the ladder on MTGA.

“How do I Draft on Arena?” That is the #1 question I get asked on my Twitch. It’s also incidentally why I’ve been drafting so much. The Ixalan singles are just gravy.

If you are just getting into Magic via Arena and have been struggling with Draft, don’t feel bad. You are not alone. It’s tough. Traditionally, in paper Drafts, eight players sit in a circle, draft together, and play BO3 matches against the other players in their “pod.” There is a ton of strategy that goes into hate drafting, sideboard cards, and anticipating matchups.

Throw all that out the window because it is 100% irrelevant when it comes to drafting BO1 on MTGA.

MTGA BO1 Draft is a different format and you have to approach it as such. Do the things that are required of the specific format at hand. Instead of playing against the other players in your “pod,” Arena pairs you against other players from different pods who have a similar ranking as you. You need to have a deck that is objectively powerful, rather than a deck that is relatively powerful compared to the other decks in your pod.

What We Know About the Bots

Knowing these few facts, we can devise a strategy that maximizes our chances of getting a powerful deck every single time.

How Do We Use This Information to Our Advantage?

If the bots stick to their color preferences and take the best card of the colors they are in each time, then you get crazy rewarded for staying open and finding what I like to call the sweet spot. Finding the sweet spot is a Draft strategy I frequently use in paper Drafts and the basic idea is to not commit to any particular combination of colors, but rather feel out which colors are open and move into them.

The basic idea here is to use the first four or five cards to simply select the objectively most powerful card in each pack and watch for signals that will indicate what color or colors appear to be the most open.

The biggest drawback to this strategy is that it often fails against other human drafters (especially high level players). Staying open is only great so long as the people passing to you stay in their colors. If other players are also staying open or switch colors, it opens up the possibility that your Draft can be badly derailed and you will have wasted many high Draft picks.

But when we are drafting with robots that are known to heavily prefer to stay in their own colors, there is zero drawback to this strategy. In paper, it is a “high risk/high reward” tactic to look for the sweet spot, whereas on Arena it becomes a “no risk/high reward” approach.

I would back this assumption up with the following data. I had very good results when I was force drafting the best archetypes on MTGA. Since I’ve adopted the sweet spot approach I’ve been getting Looney Tunes results.

If you get into the open colors the bots will literally pass you bomb rares in packs two and three. It’s completely absurd.

There is another area where you can use this information to your advantage. Since the bots use predetermined rankings to determine which cards they will select, once you’ve drafted enough times it’s pretty easy to get a sense of which cards the bots over and undervalue. 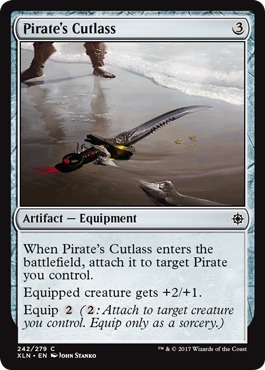 I’ve done at least 25 Drafts and I’ve never been passed a Pirate’s Cutlass. Not once. If you are drafting Pirates, don’t ever count on getting passed one of these. It makes drafting a Pirate deck significantly worse.

The cards that it undervalues are also important to make note of: 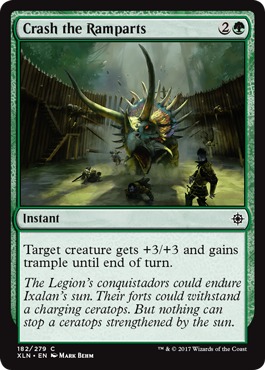 I would first pick Crash of Ramparts for a Merfolk deck. It always wheels. When I see a pack with a Crash the Ramparts and another good green or blue card, I know I can take the other card and have a very high chance of wheeling the Crash. 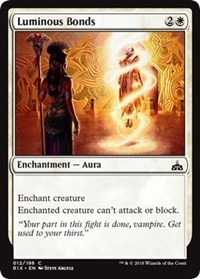 The AI consistently undervalues Luminous Bonds, which means that you can get it 5-8th pick (when it is actually a slam-dunk first pick). I’ve even seen it wheel. The fact that the AI undervalues specific cards like Crash the Ramparts and Luminous Bonds actually makes green and white better than they would be if we were drafting against humans.

Also, rares (no matter how seemingly unplayable) almost never table, which means that the AI is programmed to value rare drafting (presumably to keep you from leveling up your collection and vault? Lame!). Aside from it being annoying that the AI rare drafts (so that I can’t value rare draft), you can use that information to your advantage.

Say you are drafting a U/W deck. The pack you open has a white bulk rare, a good white common, and a good blue common. You can take the blue common and have a greater chance of wheeling the white playable since the AI will prioritize rare drafting.

Anyone Can Use This Info to Draft Insane Decks

If you’re already a strong drafter it’s likely that you are all set to dominate. If you are a new drafter it probably feels like some of this information is a little confusing.

For instance, how can you tell which cards the AI is over or undervaluing if I don’t just know a lot about Magic?

Great question! I’m glad you asked. I have a great answer: You can have a copy of LSV’s Limited rankings from CFB open on your desktop while you Draft and pick based on his rankings.

For the first four or five picks simply take whatever card LSV gave the highest ranking to and pay attention to the color(s) you are getting passed the strongest cards in. Then move in.

Even if you end up abandoning several early picks to switch colors it is worth it because the AI doesn’t hate draft, which means that you will routinely get playable cards in your colors 12th, 13th, and even 14th pick. It takes a little bit of practice but it works like crazy once you get the hang of it.

The other key you need to keep in mind once you’ve found the sweet spot is simply to be mindful of drafting a good, low curve of creatures with a nice mix of removal and tricks!

Another reason I’m confident these strategies work is because my regular Twitch viewers are also reporting seven-win Draft decks using the strategies I’ve discussed in today’s article. A few of the viewers are basically new to playing Limited on Arena, which tells me that these pieces of information are useful regardless of experience or skill level.

DunMiff/sys: You beat me. You are the superior being.