Raise your hand if you’re sick of Energy—I know I am. It’s a powerful mechanic, but the gameplay gets redundant fast. That’s pretty far from the case with this Energy deck, however. U/R Modules does some crazy cool stuff in this format. 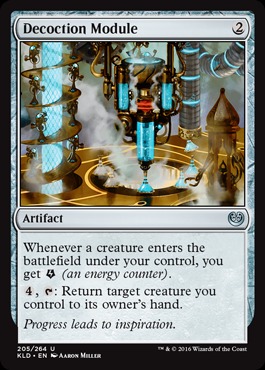 I had not seen Decoction Module in Constructed until the recent U/R and Grixis Thopter decks. Providing an extra energy whenever a creature enters the battlefield is interesting, but it’s far from broken without help. An overcosted way to return creatures you control back to your hand is nice, but not worth a ton either. That means that you need combos to take this card to the next level. 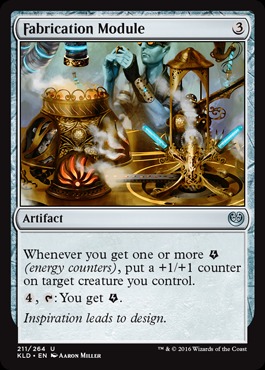 Fabrication Module is a great start. Decoction gives you extra energy when creatures enter the battlefield on your side, and this Module will start distributing +1/+1 counters onto your creatures in turn. With enough energy production, you can create a ton of extra power, and these two Modules have excellent synergy together. 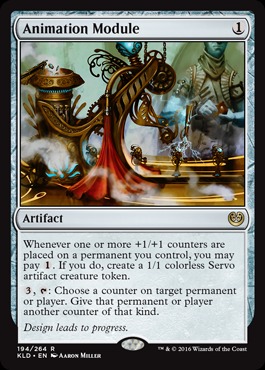 Animation Module kicks everything into overdrive. It’s only a single mana to cast, and Animation Module has a number of excellent abilities. First, you can create Servos whenever you put a +1/+1 counter on a creature for just a single mana, and you can also activate the Module for 3 mana to add a counter to one of your permanents or yourself. This means that you can create more +1/+1 counters and make more Servos, or give yourself an extra energy to start a chain.

Drawing the right combination of Modules isn’t a guarantee, but with Whir of Invention, you can make your deck dramatically more consistent. The Servos you create are artifacts, as are all of the Modules, so casting a reasonably-sized Whir is fairly easy.

You’re also going to have a ton of energy available, so Whirler Virtuoso is the perfect fit. With enough Decoction Modules, this is yet another infinite combo as you can just create a Thopter and add enough energy when that enters the battlefield to keep making more. With a bunch of energy and not enough Modules to go infinite, Mimic can also name Thopter for a lethal air force at instant speed.

You’re putting a ton of +1/+1 counters onto the battlefield with your Modules, but you also get to choose where they go. How about Walking Ballista? This gives you another way to go nearly infinite for lethal damage.

With all these specific artifacts that work so well together, Glint-Nest Crane provides some excellent early blocking and the ability to provide card advantage as you try to go off earlier in the game. 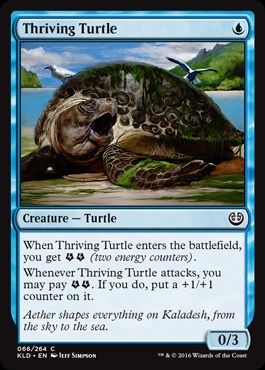 The rarely seen and innocuous Thriving Turtle also makes the cut. This is an early creature you can get down to start growing quickly with your Modules. It also adds energy and can make +1/+1 counters on its own, so there’s lots of combo potential in this 1-drop! 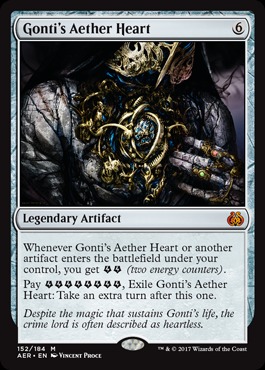 In the late game, having an additional use for all of this extra energy is great. Gonti’s Aether Heart can be found with Whir and give you an extra turn to continue using all of your mana to win the game in one fell swoop.

With all of these sweet combos, a cheap and effective way to protect them is right up my alley. Metallic Rebuke is well positioned right now, and a 1-mana Mana Leak is incredibly powerful.

I legitimately think this deck looks fantastic, and am excited to sleeve it up and give it a whirl!

WONKOTHEKILLER, 5-0 in an MTGO Competitive League