Tempo and disruption make for a winning formula, and in Legacy we get some of the highest quality of both at a cheap price. Combined with a toolbox package, we have an innovative deck that has shown it has what it takes to win.

This deck features Green Sun’s Zenith and a toolbox of green creatures for every situation. As with all lists, this one starts with Dryad Arbor so that your GSZ can always function as a Llanowar Elves on the first turn before scaling up as the game goes on.

In the early turns, you’re relying on Deathrite Shaman to provide early ramp, and in Legacy it should have plenty of fuel. As the game progresses, Deathrite will provide a fast, unblockable clock or a steady stream of life gain while disrupting a number of graveyard strategies that are popular in Legacy.

This deck leans hard on the various Faeries in Legacy, although not just the blue ones. Spellstutter Sprite is the best of the bunch as a cheap way to counter many of Legacy’s most powerful spells. A Sprite for 1 counters a plethora of important spells in the format, and you have plenty of other Faeries to assist on the big stuff. A 1/1 flying creature doesn’t seem like the most impressive stats, but this deck has so many of them that the clock adds up. 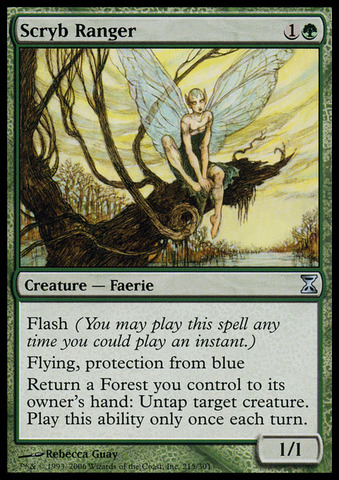 Scryb Ranger is the green Faerie you rarely hear from, but it has flash to surprise blue creatures and an untap ability that can do a number of neat tricks, like generating more Deathrite activations.

Vendilion Clique is one of the best cards in Magic’s history at providing a combination of tempo and disruption. A 3-power flying creature is a quick clock and one that can often take down planeswalkers in a single hit, especially on a flash creature. Taking an important card from your opponent’s hand, or giving yourself the option to cycle one of your own cards, are both valuable contributions from the Clique. 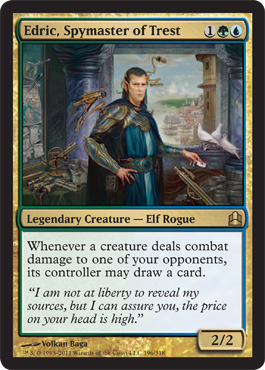 The 1-of GSZ targets provide flexibility in the middle of the game. Reclamation Sage’s enters-the-battlefield trigger can deal with a number of problematic permanents like Counterbalance. Leovold, Emissary of Trest is a real pest to get rid of and will shut down the ability of many blue decks to find answers. Edric, Spymaster of Trest is a great way to turn all of your cheap Faeries into powerful attacking creatures that will draw some cards and add additional value.

Quickling is a Faerie that doesn’t see much play, but it’s a neat way to reset Reclamation Sage, Spellstutter Sprite, or Vendilion Clique for a second go. It can also protect your creatures from removal spells when needed. 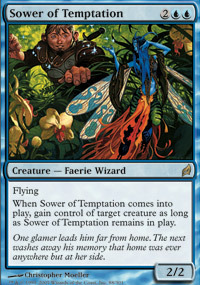 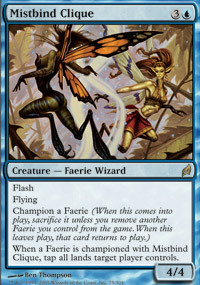 Sower of Temptation and Mistbind Clique top the curve for maximum disruption. Sower steals the best creature your opponent has while Mistbind is a huge threat that can tap them down on a critical turn.

It wouldn’t be a Faeries deck without Bitterblossom. You’re already playing some black mana sources thanks to Deathrite, so Bitterblossom is an easy inclusion with excellent synergy.

You’re playing a Legacy blue deck, so Brainstorm and Force of Will are clear inclusions as the best cards in the entire format.

Throw in the disruptive Spell Pierce, the creature dominating Umezawa’s Jitte, and the versatile Abrupt Decay, and Sultai Faeries is a pretty complete package of awesomeness!

HJ_KAISER, 5-0 in an MTGO Competitive League