It looks like the Kiki Chord combo deck in Modern got some fun new toys, and a toolbox deck with a way to combo kill the opponent is already going to have lots of options in Modern.

The Saheeli Rai combo with Felidar Guardian needs no introduction as it has been a menace in Standard since before Felidar Guardian was even legal. Speculation arose that the Cat would be banned before release weekend, but instead we’ve had to deal with the R&D oversight. In Modern, you have even more creatures at your disposal with strong enters-the-battlefield abilities to maximize the versatility of both halves of the combo. The most surprising aspect of this particular build is just how few such triggers it does have.

Chord of Calling lets you deal with any situation that may come at you. You’re going to want mana creatures, but any creature will help reduce the cost of the Chords. The mana creatures therefore ensure you can cast your other creatures quickly for bigger Chords earlier in the game. Once online, the threats you’re presenting are virtually endless, and extremely hard to play around. You can search up a Felidar Guardian to combo off with Saheeli, save a creature from removal, or just untap a creature or reset an enters-the-battlefield trigger.

Oath of Nissa is the other way to make sure you have access to your toolbox, both fixing your mana and finding either half of your Saheeli and Guardian combo.

Birds of Paradise is the best mana creature for a deck looking to produce 4 colors and not particularly concerned with making small attacks. Noble Hierarch is great, but you’re playing a triple-red card and don’t particularly care about exalted here. Wall of Roots isn’t far behind as you get a number of uses out of it and it effectively produces 2 mana to convoke Chord of Calling.

The toolbox package starts with Kiki-Jiki, Mirror Breaker. This is another way to combo with Felidar Guardian to make infinite Cats and win the game. It can also just provide value by creating extra attackers, getting extra enters-the-battlefield triggers, or extra sacrifice triggers.

Eternal Witness is the most value you can possibly get. A Chord for Eternal Witness means you get the Chord right back. This also allows you to start the chain of Chording for Felidar Guardian, blinking your Witness, and returning the Chord to your hand again. The next Chord can get Kiki-Jiki to win the game.

Pia and Kiran Nalaar’s legendary status doesn’t combo with Kiki, but it’s a great blink target for your Cats to create an army of Thopters. Thragtusk works with both to gain tons of life and create Beast tokens along the way. Voice of Resurgence is a good value creature early in the game, but also has some nice synergy with Kiki to make tokens. 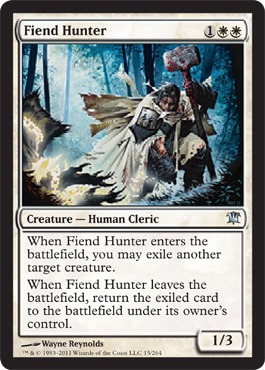 The rest of the toolbox doesn’t have synergy with Saheeli or Felidar Guardian, but they work well in a deck with Oaths and Chords. Fiend Hunter can remove a problematic threat, Qasali Pridemage is a creature Disenchant, Scavenging Ooze messes up Tarmogoyf, graveyard, and delirium decks, and Tireless Tracker is one of the best value creatures ever printed.

With Path to Exile for removal and a sideboard full of the powerful white hosers in Modern, Saheeli Kiki-Chord has the ability to play a normal creature game to win or to combo off. With so many options at your disposal, the power level is definitely there to succeed in Modern.

LILIANAOFTHEVESS, 5-0 in an MTGO Competitive League