When your creatures hit hard, offer card advantage, and you have quality removal to control the game, you have a recipe for success. The R/G Monsters deck is one of the strongest combinations of these ingredients, but adding another color can up the power level at the cost of a little consistency.

Rekindling Phoenix and Glorybringer are format defining creatures. Both can trade on a 1-for-1 basis, but neither make it easy. Phoenix is more vulnerable to enchantment-based removal, while Glorybringer really demands that they have an instant-speed answer. This is a tall ask, especially against a deck trying to put additional pressure on you. Letting Glorybringer enter combat even a single time can be too much for an opposing deck to overcome, so this is a truly premier threat. Phoenix is a 4-power flying creature for just 4 mana that requires an exile effect or you’re getting a 2-for-1. Without a quick answer, the Phoenix provides an intimidating clock.

Merfolk Branchwalker isn’t a fantastic creature, but it gets the job done. A 3/2 for 2 mana that helps sculpt your draw is a fine rate, as is a 2/1 for 2 that draws a card. Jadelight Ranger is a step above. This is a truly pushed creature, as the value of two explore triggers can’t be ignored. Drawing two lands, getting a 4/3 creature, or getting a Rogue Refiner are all excellent outcomes and resolving a Jadelight turn 3 can put you really far ahead.

Instead of the eternalize creatures to help combo with all of the explore, you’re just playing a playset of Servant of the Conduits to round out your creature suite. Exploring a creature to bring back from the graveyard is nice, but those creatures aren’t all that impressive. Having Servant to fix your mana and ramp to bigger threats help bring the deck together.

You’re keeping the red removal spells R/G Monsters is known for. Abrade is great in a variety of matchups as it kills tons of creatures and handles all the powerful artifacts in Standard. Magma Spray doesn’t have application everywhere, but exiling is great against the aggro decks in the format and it can still do work against explore creatures with the trigger on the stack. 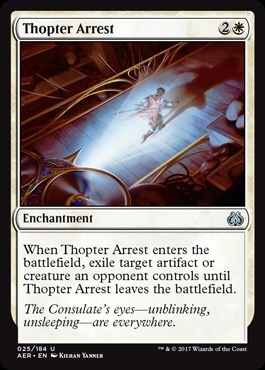 Struggle // Survive is a great way to kill bigger creatures and deal with threats like Rekindling Phoenix and The Scarab God. When you splash white, however, you don’t need to play cards like this. Instead, you can play Thopter Arrest and Cast Out as exile effects that can kill the biggest creatures for less.

With slightly fewer creatures, slightly more removal, and the ability to ramp with Servants, planeswalkers are stronger in this version than in straight R/G. This means that Chandra, Torch of Defiance can move from the sideboard into the main. This will give you a few more ramp options, another strong removal spell, and a way to end the game even against opposing removal spells. At the top of your curve you have access to Ajani Unyielding. Ajani can totally take over the game in card advantage or just remove opposing threats. With your opponents’ Vraska’s Contempts and Ixalan’s Bindings taxed by your creatures, it’s not uncommon for these planeswalkers to take over the game when the smoke clears.

R/G Monsters combines the power of explore with some of the best flying threats in Standard. With great removal spells and some awesome planeswalkers, Naya Monsters could be just the way to win in Standard.