While preparing for the MOCS, I messaged Hall-of-Famer Ben Stark to ask what he was running at Grand Prix Atlanta. He said that he’s playing a Medium Red deck that has bigger cards main deck to try to have the best matchup possible in game 1 against Temur. Andrew Baeckstrom took this strategy to a Top 16 in that MOCS tournament before Ben took it to the finals in Atlanta.

You still need an early board presence, so the 1-drops stay in the deck. Bomat Courier is such a strong card that it’s blasphemy to ever think about cutting one. It’s the best turn-1 play out of these aggressive decks and stockpiling cards underneath the Bomat makes the middle portion of the game great for you. You trim 1 copy of Soul-Scar Mage (and it will actually find its way into the sideboard) as a slower threat that you don’t want to draw too many copies of versus Energy.

As you move along the curve, things get dramatically different. Gone is every copy of Earthshaker Khenra. You still have a couple copies of Kari Zev, Skyship Raider, but you’re down to just 2. Having under 10 creatures in the deck that cost less than 3 mana is a dramatic shift from the red decks we’re used to. It’s common nowadays to see 17 creatures that cost 2 or less, and that number was even higher before rotation. Instead, you won’t be flooding the battlefield early.

The biggest consequence of going bigger is that Hazoret the Fervent is no longer the unbeatable powerhouse it once was. Mono-Red was just a Hazoret deck. It was okay if they played bigger creatures that would eventually eat your early drops after you got in a bit of damage because Hazoret could clean up the mess. This deck can’t empty its hand nearly as fast, and so Hazoret drops from a slam-dunk 4-of that you would play 5-6 copies of to just a single copy here.

Rampaging Ferocidon is the only 3-mana creature to make the cut, pushing Ahn-Crop Crasher and its inability to get through tokens, Blossoming Defense, and its vulnerability to Magma Spray right out of the deck. Ferocidon is a tough threat for Energy to answer without removal as it makes Whirler Virtuoso much weaker and can slide past Bristling Hydra thanks to menace. 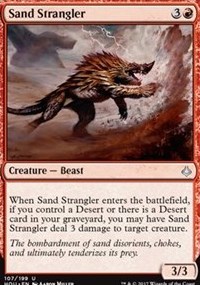 You’re going bigger, so you’re going to play more lands. And with only one color, you don’t need more Mountains. This means more Deserts, and specifically Dunes of the Dead to sacrifice to Ramunap Ruins and Scavenger Grounds for extra value. This also means that Sand Strangler, which started as a great sideboard card in the mirror and eventually moved out of the deck entirely, is a 3-of in the main with the 4th in the sideboard. Flametongue Kavu is still a great Magic card, attaching a 3/3 body to your removal spell that can kill anything short of Hazoret in the mirror and all the early drops out of Energy.

After sideboard, every Temur Energy deck has access to Chandra’s Defeat. They already have main-deck Harnessed Lightning, so that can make Glorybringer significantly weaker after game 1. Harnessed Lightning should already be taxed in game 1, plus leaving 2 mana up is a challenge against Red decks, so Glorybringer is free to dominate the skies.

You’re going medium(er?), so planeswalkers are a great way to control the board and gain additional card advantage. Chandra, Torch of Defiance is one of the best in the business.

The removal spells still feature the full 4 copies of Lightning Strike, but are willing to veer from spells that can deal damage directly to opponents. There are still 2 Shocks, but the other two slots for 1-mana removal spells go to Magma Spray and the ability to exile a threat. There are 3 Abrades to deal with some slightly bigger creatures and artifacts like God-Pharaoh’s Gift.

The most surprising card in this Mono-Red deck has to be Treasure Map. You don’t even see this card in the main deck of control decks! Here, it provides valuable scrys early and flips into a powerhouse later. It gives you access to more mana to cast your bigger spells and a few extra cards that you can sacrifice to your Cove to take over.

Medium Red approaches the format in a way that your opponents are unlikely to expect. You’re weakening your matchup against control in game 1, but the trade-off is more power against the most popular decks in the format!

.ANDYGREY, Top 16 at the MOCS Playoff