The 3-color mana bases of Frontier are a cinch when you can utilize two full sets of fetchlands to get your basics. While I think this list may go a bit too heavy on shadowlands, the fact that you can play 4 Bloodstained Mires and 4 Wooded Foothills means that Jund is sure to have an easy time casting its spells. So let’s make sure they’re powerful! 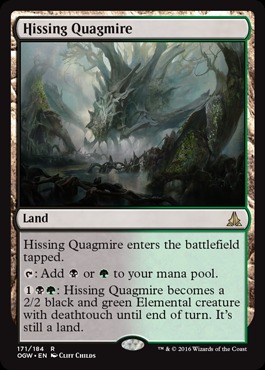 The creatures are no joke. Sylvan Advocate is a great early blocker that turns into an absolute monster in the late game. Combined with a playset of Hissing Quagmire, Jund can turn the corner and wipe out an opponent in a couple swings. Along that same path is Tireless Tracker. Those will come down early, provide card advantage, and then be the biggest creature on the board.

Kalitas, Traitor of Ghet can shut down entire archetypes (remember that Rally is back!), slow down aggressive decks, or just provide value. Tasigur, the Golden Fang enters play early in a fetchland world before providing incremental advantage.

This particular Jund list is heavy on planeswalkers. There are 11 featured here, and it all kicks off with 4 Liliana, the Last Hope. Not only can Liliana kill small creatures or slow down midsized ones, but she can load up the graveyard and provide value that way. The combination of Liliana and a delve creature like Tasigur isn’t an interaction we’ve been able to utilize in Standard, but it’s effective. Finding creatures to bring back while adding fuel is serious synergy.

The other card that combos super well with Liliana’s minus is Kolaghan’s Command. This card should already pretty easily provide value. It deals 2 damage, destroys artifacts, or makes opponents discard a card. All of these make for an easy 2-for-1, but the combination with Tasigur and other powerful creatures puts it over the top. Tasigurs will stay cheap and Kalitas will be able to come back into play over and over to shut your opponents down.

Chandra, Torch of Defiance hasn’t quite lived up to the Standard hype, but it’s good enough to get a 4-of in Frontier Jund. This is a value machine. It deals a consistent stream of damage to shut down opposing midrange and control decks. It picks off a creature of reasonable size. It can draw cards or add mana. And the ultimate, while it doesn’t end the game on the spot, really does end the game.

Nissa, Vital Force is best friends with fetchlands. Tick her up once to protect her, or get in for 5 damage and you’re already there for an ultimate. With a playset of Mires and Foothills, this can easily mean you’re drawing two extra cards per turn. The minus is incredibly strong with so many good planeswalkers and creatures in the deck, and just ticking her up is a great clock against unprepared opponents.

With a full set of Roasts to handle the big creatures in Frontier (Tasigur, Anafenza, Tireless Tracker, Siege Rhino), and Painful Truths to reload while shutting the door with planeswalkers, Jund is still strong. Everyone loves Jund!