Hall-of-Famer Ben Stark helped Desert Red make its debut to the world last season en route to a 2nd-place GP finish. Showcasing the power of a more controlling red deck that could end the game late with some strong spells and Ramunap Ruins put Desert Red on the map. With Temur facing a number of bannings, and with the signature Desert in Ramunap Ruins also banned, that seemed like it might be the end of Desert Red. Not so fast, as red has some of the best cards in Standard to play the long game with!

Desert Red isn’t looking to close out the game on turn 5. It has plenty of 4- and 5-mana spells, so cards like Hazoret the Fervent don’t work out particularly well. Without the ability to empty your hand quickly, Hazoret is a 4-mana way to spend 3 more mana, discard a card, and deal 2 damage. Not so hot. Without the 1-drops, Hazoret gets pushed to the side. Instead, the main finisher becomes Glorybringer. Glorybringer is excellent at getting value against any sorcery-speed removal thanks to haste and it’s expensive enough to dodge Fatal Push. They can leave up 4 mana for Vraska’s Contempt, but that’s a lot of potentially wasted mana every turn. Letting Glorybringer hit once and then dealing with it is another option, but doesn’t feel great once you’ve taken 4 damage and lost your best creature.

Chandra, Torch of Defiance gets an entire playset in the main deck. As removal, Chandra is effective and still leaves a planeswalker behind. With so many ways to use your mana, adding 2 red is plenty useful. Dealing damage to a planeswalker or your opponent when ticking up for card advantage means that you’re consistently getting ahead. With a game-winning ultimate, Chandra is a premium card at every level.

The new kid on the block is Rekindling Phoenix. A 4-power flying creature for 4 mana is a solid rate, but the resiliency to removal is what makes the Phoenix so special. Trading for another creature in combat means that the opponent will still have to deal with the Phoenix or your token, lest they be faced with the same problem once again. Forcing the opponent to have multiple answers, or trade in combat and have another answer, will make Rekindling Phoenix a Standard staple for years to come.

The only thing bad about Pia Nalaar is the fact that she’s legendary, but she trades off in combat or for removal spells so often that it’s rarely a huge deal. Getting multiple creatures, 3 power, evasion, and some powerful abilities all for 3 mana, Pia is a game-changer.

Earthshaker Khenra loses value without all of the early aggressive creatures, but that’s not a deal-breaker. Khenra can force in some early damage, come down and simply block, and then threaten to be a huge problem in the late game. Getting to eternalize into a 4/4 haste creature that turns off a blocker later in the game gives the Khenra some versatility.

Treasure Map is not the most powerful card in the world, but it does some really strong things. Scrying to make sure that you’re finding the lands or action you need has value, but is not inherently worth the mana you’re investing. While you don’t have any other Treasures outside the Map, getting a few extra cards in the late stages of the game after trading off resources makes Treasure Map a way to take over the game. 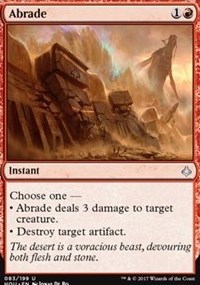 Your removal suite is straightforward. You’re looking to take care of creatures early and often. Magma Spray gets the nod over Shock thanks to the powerful creatures that can come back from the graveyard in Standard (and now add Rekindling Phoenix to that list). Abrade doubles up as a way to deal with artifacts such as Vehicles and God-Pharaoh’s Gift. Lightning Strike isn’t going upstairs quite as often in this deck except in cases of finishing off a planeswalker. Having the option in your back pocket for a 2-mana Lightning Bolt is still quite strong.

Ramunap Ruins may be gone, but you still have some useful Deserts. Scavenger Grounds can really mess with graveyard decks, and Dunes of the Dead provides some late-game value as a creature emerging from your lands! Red decks don’t have to be all-in or even aggro to win in Standard, and this deck really showcases how to do it!

MAZUKU94, 5-0 in an MTGO Competitive League