Boros is known for being aggressive, but with planeswalkers, top end, and some of the best cheap removal spells in the format, Boros can play midrange well.

Cheap, instant-speed removal is imperative for making sure that you don’t fall behind while setting up for your powerful mid-late game. Abrade is clearly one of the best spells for this role as it’s also your best form of interaction against God-Pharaoh’s Gift and Treasure Map. Seal Away gives you some cheap removal that can exile early creatures or bigger spells like Rekindling Phoenix and Hazoret the Fervent.

Ixalan’s Binding is your bigger removal spell. This gives you a way to permanently deal with a deck’s biggest threats while also giving you a clean answer to planeswalkers.

The planeswalker suite for Boros is strong, although that’s going to be true for almost any color combination for the foreseeable future. I can already see myself growing tired of writing about why Karn, Scion of Urza is a great card as it’s seeing play in such a massive percentage of decks in the format right now. A 4-mana colorless planeswalker that draws cards and has a high loyalty is simply excellent and fills a nice role in aggressive and slower decks for that reason. This deck doesn’t use Constructs particularly well, but they’re useful to have the option. Chandra, Torch of Defiance has long been the 4-mana card drawing planeswalker in Standard, with the ability to be a win condition, removal spell, or mana ramp. 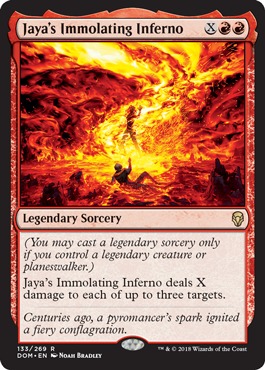 Having these planeswalkers to complement your legendary creatures lets you play Jaya’s Immolating Inferno. This is an expensive spell, but it does a ton of damage. 6 mana deals 12 damage total, albeit 4 to three different targets. Curving Chandra into the Inferno lets you plus Chandra for extra mana and you can take down a couple of 5/5s and a large planeswalker on the other side of the board.

Treasure Map is the nonblue card advantage spell of choice in Standard. It’s cheap to get down, so if they answer it you’re not hurting too much. Getting to filter your draws gives you a small advantage, but the Map flips quickly into an extra land, three extra Treasures, and the ability to draw extra cards or just use that mana if you need it.

The creatures in this deck are large, but Walking Ballista gives you some versatility. A 2-mana 1/1 Ballista is acceptable and kills many threats in Standard, and late in the game Ballista just takes over.

Glint-Sleeve Siphoner, Bomat Courier, and white creatures are popular, and Chainwhirler punishes the opponent for having 1-toughness spells in their deck.

Pia Nalaar gives you another legend for the Inferno and a couple of bodies to slow down the opponent. For a real brick wall and way to turn the game, you have a couple copies of Siege-Gang Commander. Throwing Goblins at creatures or the opponent are both great ways to end a game, and you’re already getting 5 total power and toughness for 5 mana. 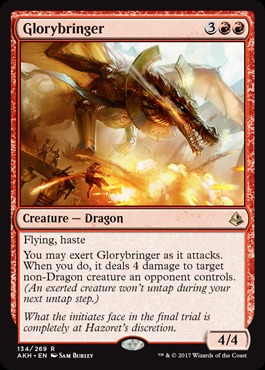 The 5-mana flying threats in Boros are some of the best cards in the game. Lyra Dawnbringer is Baneslayer Angel 2.0. If you don’t have an answer immediately, she stops the opponent’s attack and turns the game in your favor. You also have Glorybringer for an extra threat and removal if they don’t have an instant-speed answer at the ready. If the opponent was tapping out to present a threat figuring they would kill your Lyra and swing on their turn, Glorybringer is super punishing.

Boros has all the tools to keep the board under control and win the long game. With some of the best threats, cheap removal, and planeswalkers in the format, this deck can do it all.

GRAEY, 5-0 in an MTGO Competitive League