Dominaria introduced a number of cards (Karn, Scion of Urza, The Antiquities War, and Zahid, Djinn of the Lamp) that are particularly powerful in artifact decks. So naturally, when the call went out to submit your Standard brews, we received plenty of great submissions based around these 4-drops. As you showed, they could find homes in Four-Color Vehicles, Paradox Engine combo decks, and more.

But Linus surprised me by showing a potential home that hadn’t even crossed my mind. I selected his submission as my favorite, earning Linus $25 in store credit. Congratulations!

The basic idea of this deck is to play Inventor’s Goggles on turn 1 and then follow up with Artificers that pick up the Goggles for free, turning them into real threats. 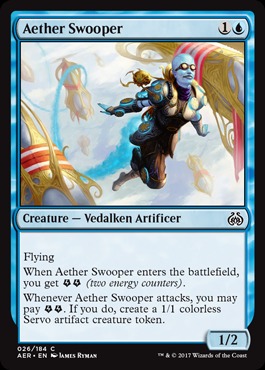 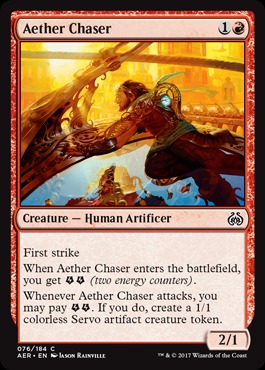 All of the Artificers can churn out Thopters and Servos, which turn Zahid into a 4-drop (98.2% of the time against a non-interactive opponent) and strengthen Karn’s Construct tokens. Those 4-drops are powerful enough to dominate the game by themselves, but even if they die, you can go to the air. An aerial assault with Thopter tokens, Aether Swoopers, and Aethersphere Harvesters, all boosted by Pia Nalaar, can overwhelm any opponent relying on ground pounders.

The first time I saw a U/R Artificers deck was when Pro Tour champion Craig Wescoe went 5-0 in testing for Pro Tour Ixalan. Several weeks later, Okada Naoya piloted his version of the archetype to the Top 8 of Grand Prix Shanghai. Although the deck fell out of favor afterwards, Linus didn’t forget about it.

As he explained: “I really enjoyed [playing the U/R Artificer deck] in the past, but I also had a problem […]: most of the deck’s threats are easy to answer, and the deck did not really have a single card that was strong enough to finish a game. That’s the reason I always tried to put in The Scarab God, but that messed with the mana in a big way.”

“With Dominaria, I could include some nice mid to late game finishers. […] The first being Karn, Scion of Urza, who can give you some much-needed card draw and a few tokens that can become gigantic in a deck full of artifacts. Besides Karn, you also have Zahid, Djinn of the Lamp, who is basically a 4-mana 5/6 flyer in this deck. This Djinn doges most of Standard’s removal and can kill your opponent pretty quickly.”

I took his deck for a spin on Magic Online, and even though some of the Artificer cards felt underpowered, I liked the core synergies. One thing that surprised me was how often I beat Lyra Dawnbringer, one of the new Standard’s premier threats. Given the deck’s energy theme, she was easily killed by Harnessed Lightning. Also, she would lose in combat to Zahid, Djinn of the Lamp or couldn’t block thanks to Pia Nalaar.

I have several suggestions to improve the main deck:

On the whole, these are relatively minor changes, as I liked the original split between lands, instants, support spells, and payoff cards in Linus’s build.

I was happy with his sideboard design of countermagic against U/W Control, removal spells against Mono-Red Aggro, and Syncopate and Glorybringer against midrange decks. But in re-tooling the deck, I added two Magma Spray as a sideboard card against Scrapheap Scrounger and other small creatures.

If you’re looking for a unique, competitive Standard deck that is somewhat reminiscent of Affinity, then give U/R Artificers a shot! Congratulations Linus once more, and thank you all for the countless great submissions that were made to the contest.