Delve deep enough into old Cube lists and you’ll find full 10-Signet cycles as mainstays. But the winds of Cube design are changing. According to CubeTutor, the average 360-card cube runs no signets, and the average 450-card cube runs 4 signets, one for each blue guild.

Opinions on the topic are equally adamant and diverse. On one end of the spectrum, the Channel Cube Cast crew took the paraphrasable stance “who gives your UW Control deck the right to Wrath on turn 3?” On the other, many designers are proponents of the “run cards that win games” route.

The camp advocating for running only blue signets is a curious middle ground. This approach holds its roots in the movement away from running complete cycles of fixing. Veteran Cube designers will be familiar with the concept of “guild-specific” fixing. The idea is that after you fill out your fixing section with the usual cycles of fetchlands, dual lands and shocklands, you pick lands that are suited to the natural strengths and needs of the color pairing. Perhaps Dimir goes for Creeping Tar Pit and Temple of Deceit, while Gruul opts for the likes of Copperline Gorge and Fire-Lit Thicket. 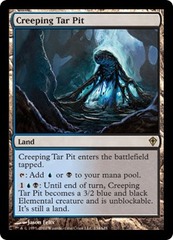 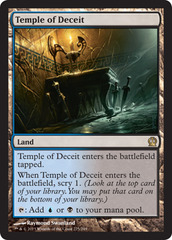 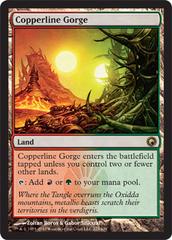 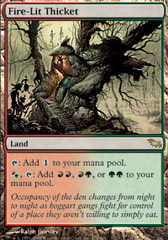 While this method appears innocent on the surface, one of the downsides is that it’s inherently prescriptive in its approach. Sure, the Esper color combination may most commonly assume a controlling role, as you start to fill its land support with lands that enter the battlefield tapped, gradually it becomes prohibitively difficult to play anything but control in those colors. From my perspective, part of the allure and longevity of the Cubing experience comes from the ability to build decks in unconventional color combinations. Esper aggro decks are a joy to play when they come together, and artificially inflating the barrier to entry for these decks seems detrimental.

This relationship isn’t remotely symmetrical either. Control decks are much less hampered by running, say, a painland or a Scars land, than an aggro deck is by running a tapped land, or—heaven forbid—a bounceland. Signets compound this dynamic on two fronts. Firstly, many designers treat them as part of their guild’s fixing, which deprives aggressive decks of a fixing slot. The ongoing presence of mono-color Cube aggro decks is a function of this dynamic. This is evidenced by the Pauper Constructed metagame, where the fixing options of tapped lands and Signets have historically lead to mono-color attacking decks and multicolor control decks.

Tangentially, somewhere along the line early Cube theorists propagated the notion that a high prevalence of this kind of fixing leads to multicolor “good stuff” decks. Empirically, the main result of running a high-density of aggro-friendly lands has been the introduction of fun multicolor aggro decks.

If you choose to run artifact-based acceleration, I prefer the guild-agnostic options like Sphere of the Suns, Coldsteel Heart, and Mind Stone, as they remove the temptation to cut into your fixing section with spells that can’t be used by all decks.

The choice of whether and how much artifact fixing to run is another matter. There is a genre of Cubes (including the MTGO Cube) that have (not-so-playfully) been labeled as “Grim Monolith” Cubes. These Cubes are characterized by a high prevalence of strong artifact acceleration, and decks that use said cards to try and cast “big things.” Often these Cubes notionally support aggro, but the games that take place between the “big decks” and the aggro decks are generally atrocious: the two decks goldfish against each other, one attacking and the other durdling and ramping. The game ends when the big deck’s life total hits 0 or a Wurmcoil Engine hits the table.

Gross simplifications aside, a lack of interaction can make playing the aggressive role in such Cubes very boring. It’s one thing to try to break down the opponent’s defenses, and another to hope the game ends before your opponent casts a meaningful spell. Rather than design archetypes to simply go big and over the top, I’ve opted for the inclusion of spells like Innocent Blood, Flame Slash, and Condemn that can engage the opponent directly. It’s a different approach, but I’ve found the resulting gameplay to be more interactive and rewarding.

Ultimately, there’s no correct solution. Think of your role as a game designer. Your cube has 360 (or more) knobs to turn. What you do with them depends on the experience you’re trying to craft. If you look at it from the perspective of creating the knobs and resources, it’s clear that your job is to fill the game with components that collectively create an enjoyable experience.

Clearly there’s no right or even consensus answer to any of these. What’s important to focus on is how your design decisions impact the player experience. Do you want control decks wiping the board on turn 3? Turn 4? Turn 5? What should a game between a control and aggro deck look like? How does the fixing you provide impact the range of decks players can build?

Ah, the winner of the second annual “how badly can we screw up the design of blue 3-drops in a multiplayer summer release” competition. Dack Fayden follows in the illustrious footsteps of True-Name Nemesis, a card whose design would get you laughed off an amateur “custom card design” forum. You can imagine how that would go down.

“Okay, how about this. A 3-power three-mana creature with protection from your opponents.”
“Protection from opponents? What does that even mean?”
“Oh, you know that DEBT mnemonic device? That, but for everything controlled by your opponent.”
“Creatures too?”
“Of course.”
“So, it’s like a 3-mana Progenitus?”
“Aha, I’m glad you asked! I always thought Progenitus was hamstrung by its ‘protection from everything.’ ‘Everything.’ It’s too all-encompassing. It can’t carry a Jitte or Swords! I’m worried players won’t appreciate the distinction though. We should probably make sure to put a glowing sword or something in its artwork just to drive the point home.”
“And how much toughness does this mythical creature have?”
“Well it doesn’t take damage from anything, so we can just set it to 1. I wouldn’t want it to be broken when combined with Phenax.”
“Uh… okay. This has never been done before, what part of the color pie do you see it in?”
“We’ll just slot it into the color that’s supposed to have the weakest creatures.”

Dack Fayden rubs me the wrong way. Magic as a game is built upon the mana system, and we accept intrinsically that there’s some abstract correlation between the cost of a card and the impact it has on the game.

Planeswalkers push that envelope in an interesting way. Historically, planeswalkers have been tuned to a level where if they get activated once and then get killed, you haven’t yet gotten market value out of them. Jace, the Mind Sculptor isn’t particularly impressive when it’s a 4-mana Brainstorm plus Healing Salve. Nobody would pay Garruk Wildspeaker’s asking price for a 3/3 Beast and 2 life.

Planeswalkers have always been hard to evaluate, and it’s not really possible to translate the theoretical mana cost of a planeswalker’s abilities to its power level. Jace, the Mind Sculptor was basically a collection of complementary 1-mana abilities. Whether Brainstorm should cost only a single mana is another debate.

Dack Fayden comes equipped with a (situational) four-mana ability. His -2 is a more permanent Steal Artifact, whose going rate is 4 mana. For comparison, to find a 4-mana effect stapled to a planeswalker you have to dig back to the 8-mana Nicol Bolas, Planeswalker.

There’s a school of Cube design that tries to promote whatever maindeckable artifact removal you can find. The reasoning is that many of Magic’s (and should you choose to include them, Cube’s) most powerful cards are artifacts, but dedicated artifact removal can be extremely narrow given the overall low density of artifacts in the typical Cube environment.

Veteran Cubers know the pain of holding a target-less Smash to Smithereens for the duration of the game. The problem is a product of one of Magic’s fundamental design “flaws,” if you will. There are many card types, and most of them can’t be interacted with unless you have a card that specifically has the words “target ____” on it. This generally isn’t an issue with creatures, because their high prevalence necessitates the presence of creature removal.

By contrast, to step outside of the confines of Magic for a moment, Netrunner (another Richard Garfield game) uses a system wherein nearly every object can be interacted with via the game’s basic resources: money and actions. Netrunner is effectively an interactive resource exchange exercise, and you are never really without options: you just may simply lack efficient ones.

If you look at retail Magic sets, you’ll see that generally the most powerful artifacts are printed in “artifact blocks.” Scars of Mirrodin was filled with cards like Mimic Vat, Swords, and Wurmcoil Engine. Sure, part of the reason is to promote the theme of the set, but from a gameplay perspective, the reason they can print more powerful artifacts in these sets is because there are so many artifacts. Because of this, artifact removal becomes commonplace, and players do not lack for ways to interact with these cards. This is an important dynamic.

Most classically designed Cubes fall into a dangerous configuration, with a low density of artifacts, many of which are very oppressive and potentially game-breaking. I don’t think this is a good dynamic, and unless a ton of Qasali Pridemage-esque cards get printed, there are two main approaches you can take:

I’ve taken the latter approach with my Cube, as it’s the easier and less disruptive to a standard Cube’s core design.

Regarding Dack Fayden, I do think there is some interesting play to it. Repeatedly looting is skill testing, and if an opponent has an artifact in hand, there may be a fun dance they have to do to remove Dack Fayden before they can cast their spell. But I imagine that getting your artifact permanently stolen by a 3-mana planeswalker will feel pretty violating, even if it’s something as innocuous as a mana-rock.