Just last week I talked about inertia in Pauper. Due to the large card pool, it takes a lot for a new card to make inroads. Then Core Set 2019 hit Magic Online and within a week three new cards posted a 5-0 (with one of those also making a Challenge Top 16). All three of these cards—Elvish Rejuvenator, Goblin Instigator, and Cavalry Drillmaster—are creatures with reasonable enters-the-battlefield effects.

They all also happen to fit into archetypes that were already established but help to give them a new wrinkle. When I wrote that Magic design could capitalize on momentum, this is exactly what I was talking about. These three creatures may not turn Pauper on its ear but they have already had an impact. The question, however, is whether any of these decks have staying power.

Cavalry Drillmaster was not on my radar when I looked at Core Set 2019. I mean sure, it looked like a neat card for Limited to help push through damage, but sorcery speed first strike is more about pushing through damage than trading in combat. This deck, however, uses every ounce of Drillmaster. 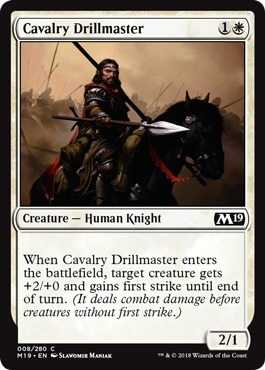 First, it pairs the creature with Deftblade Elite. Provoke means that the 3 points of first strike can be used to pick off blockers at will. Second, the deck runs Kor Skyfisher. Long before it was picking up Alchemist’s Vial the 2/3 flyer would return an Unhallowed Cathar to get a second use. That trick is recycled here, as well as rebuying the +2/+0 bonus. Skyfisher picks up Thraben Inspector here just like it does in Boros Monarch. Finally, Drillmaster is a Knight, which turns on War Falcon.

What we have here is basically a white Sligh list, a low-to-the-ground aggressive deck with some reach in the form of Mutagenic Growth and the ability to draw cards with Thraben Inspector. Cartouche of Solidarity is 2 points of power (one of which has mock haste) while Journey to Nowhere at the top end can punch through damage.

Out of all of the decks featuring Core Set 2019 cards thus far, this is the one in which I am the least confident. Aggressive white strategies have an uphill climb and I say this as someone who loves a Loyal Cathar. Rather, I feel that this style of deck can too often run up against a Tron build running Moment’s Peace and suddenly have their only path to victory completely walled off. Unlike Stompy, which can punch through early with Vines of Vastwood and Rancor, this deck lacks the burst damage to win quickly.

I am a longtime proponent of Goblins. While I tend to play rather grindy by leaning on Death Spark, there is another way: tokens! Cards like Dragon Fodder and Krenko’s Command can churn out bodies while Impact Tremors can pile on the damage. Goblin Instigator fits into this deck perfectly. Two bodies and 2 power for 2 mana is exactly what the Goblin Chirurgeon ordered. 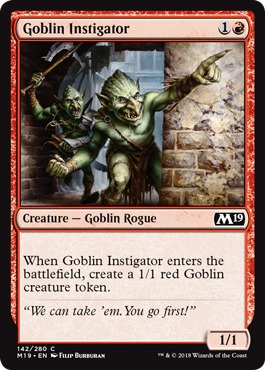 The deck listed above wants to race. It pumps out bodies at a rapid rate and wants to convert them into damage as soon as possible with Impact Tremors. Once they stick around you can throw them at your opponent with Goblin Bushwhacker or set up a kill with Goblin War Strike. Rounding it out is Fireblast for when you only have 16 Goblins in play.

A deck full of 1-toughness creatures is a tough sell. Even with Goblin Caves in the sideboard, Electrickery and Shrivel are heavily played sweepers. Add to this the presence Augur of Bolas and Thraben Inspector, and you have a recipe for sending 1/1s to their doom like so many lemmings off the side of a cliff.

kungfutrees 5-0 in a Pauper League

The last card I want to talk about today is Elvish Rejuvenator. The Satyr Wayfinder and Rampant Growth mashup made it to the Top 16 of last Sunday’s Challenge and posted a 5-0 in the same week both times in Tron decks. This makes perfect sense. Elvish Rejuvenator can look at the top five and put any land onto the battlefield. In an ideal Tron draw this means jumping directly from 7 mana (thank you Prophetic Prism) to ten by flipping over another Urza’s Tower. When Tron mirrors often come down to who has more mana, an extra land drop is a massive advantage. 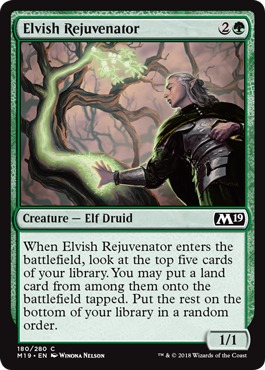 And both of these decks want mana. The Challenge list uses the Mnemonic Wall and Ghostly Flicker engine to gain value turn over turn until Rolling Thunder can be found. Then it seeks to aim the updated Fireball at the dome. The list from the League eschews a direct kill by adding Dinrova Horror. As anyone who has been on the receiving end of a Dinrova Horror lock can tell you, getting an extra loop each turn hurts. But at least you die faster. Both of these builds skimp on removal, instead relying on Moment’s Peace to buy time until their endgame comes online. Rejuvenator can also eat an attack and die for the cause, which then allows Pulse of Murasa to do the work needed to put the Tron player back at a healthy life total.

Out of all three cards discussed today I think Rejuvenator is the best. Coiling Oracle was a hell of a card in its day and while Elvish Rejuvenator will never draw a card, the fact that it looks five cards deep and can put a land directly into play is big game. The body is not impressive, but being able to get ahead on mana development while also committing to the board is an area where Pauper lacks options. The drawback, if it can be considered one, is that any deck running Rejuvenator wants to run more lands than normal to make sure that it can reliably do its job. That’s definitely not a bad thing.

Core Set 2019 may have made it through design and development before the Pauper boom. It still has managed to break through, putting more cards into posted deck lists than either Dominaria or Rivals of Ixalan. If this is a herald of things to come, I, for one, am excited for what the future holds.