When Solemnity was spoiled, everyone’s mind immediately leapt to one card: Dark Depths!

Yes! You now have another easy way to cheat Marit Lage into play, alongside with Thespian’s Stage and Vampire Hexmage in Legacy. Here’s just a sample of the cards that combo with it immediately:

Dark Depths: Produces a 20/20 flying, indestructible on the spot. 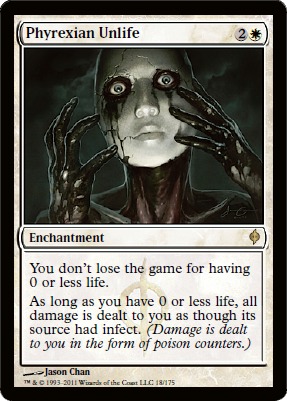 Phyrexian Unlife: Gives you immortality. Cards with cumulative upkeep won’t need you to pay their cost, like how Glacial Chasm and Elephant Grass give you protection from creatures, and in the case of Chasm, burn spells as well.

Thing in the Ice: Becomes Awoken Horror with a single spell.

On top of that, infect creatures don’t deal combat damage. It renders cards like Aether Vial, Chalice of the Void, Umezawa’s Jitte, and Endless One inert. Cards with persist like Kitchen Finks and Murderous Redcap will come back for free, letting this combo with any sacrifice outlet like Viscera Seer.

Today, I’m going to explore a couple of archetypes that’ll try to combo with Solemnity in Legacy.

This version of the deck tries to create as many combos with Solemnity as possible. So, you really have to get Solemnity into play to function, but rather than play 4 copies, you’re playing blue, which gives you access to cantrips and Force of Will.

You’re really at the lower limit of blue cards here: 18. But having protection for your combo and opposing combo decks is so important that I would run it even with so few blue cards.

Thing in the Ice looks pretty good here, not only because it combos with Solemnity, but with this many cheap spells you’re able to flip it on its own reliably. Thing in the Ice, Glacial Chasm, and Phyrexian Unlife are all cards that buy you time and let you win with a Marit Lage or some Awoken Horrors.

Knight of the Reliquary can also become a good way of winning the game after it helps your deck function. It can fetch the Dark Depths + Thespian’s Stage combo, it can search up Glacial Chasm, and it tutors for some powerful sideboard lands.

I could even add Retreat to Coralhelm and Kessig Wolf Run, but I think that’s going too deep and I want a more consistent deck.

Noble Hierarch helps with the mana base since you’re playing only 12 blue and white sources. You really need to get more, and Hierarch helps there perfectly.

From the sideboard you get Swords to Plowshares to replace Force of Will in the fair matchups, along with more protection like Phyrexian Unlife. 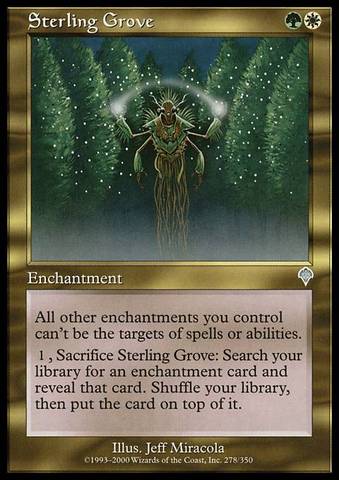 Sterling Grove helps not only to protect your enchantment from Abrupt Decay, but also to find the lock pieces when you need them.

Next, let’s put the Solemnity package into Enchantress!

This deck used to play Rest in Peace with Energy Field as protection. Now Solemnity with Phyrexian Unlife, Glacial Chasm, or Elephant Grass lets you play straight green-white, and have an instant win in the form of Crop Rotation for Dark Depths.

You don’t need the Rest in Peace plus Helm of Obedience combo anymore now that you have an alternative to Emrakul.

You might argue that only 1 Dark Depths is too few for a win condition, since your opponent can just Wasteland it, or if you draw it you can’t flash it in end of turn anymore and your opponent can bounce it with Jace, the Mind Sculptor. That’s why you still run Emrakul, the Aeons Torn.

Emrakul is also great in that once you go off with your Argothian Enchantress and Enchantress’s Presence, you win in the same turn.

Wasteland is pretty annoying versus Glacial Chasm and Dark Depths since you don’t have Life from the Loam to loop it, making those two cards pretty bad versus any deck with Wasteland.

Where Dark Depths and Glacial Chasm aren’t at their best since they can be easily answered, the Solemnity plus Phyrexian Unlife or Elephant Grass combo provide all the protection you need. 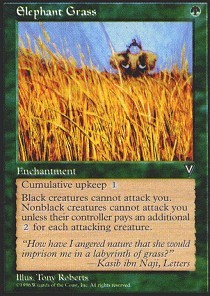 Elephant Grass is a great way to exploit Solemnity that we didn’t utilize in the other list.

Since cumulative upkeep never goes up, just like for Glacial Chasm, you’re able to make your opponent’s creature very slow until you find another lock piece to lock them down.

Enchantress has never been a tier 1, and probably will never be even with this cool piece of technology, but now it has more pieces to lock down your opponent and a faster way to win the game.

I can’t wait for Hour of Devastation to be legal on MTGO to try my brews, and if you guys think of something better, add your lists or adjustments in the comments!