I set out to prepare for GP Los Angeles on Magic Online and before long I found myself trying Infect, which has been a bit of a pet deck of mine for a while now. I went 7-­3 in the Constructed portion of Pro Tour Fate Reforged and I went 7­-3 in the Constructed portion of Oath of the Gatewatch, so for me it’s a fun deck to play that’s also exceedingly powerful. In my testing it got to be so extreme and I was winning so much that I stopped practicing and decided to focus my efforts on other future tournaments. The returns on playing match #101 after I had already won most of the matches I played felt too low. I have never done that preparing for a tournament before.

After about a hundred matches, here was the list I settled on:

I’ll admit the main deck may look a bit weird, but each card choice has been meticulously selected for a specific purpose.

I knew that I wanted 3 copies of this card after sideboard for matchups where people play Night of Souls’ Betrayal, Anger the Gods, and Pyromancer’s Ascension, but it’s also totally reasonable to cast on a Lightning Bolt or a Path to Exile. It felt to me like drawing 2 copies of Spell Pierce in game 1 almost always resulted in a loss, drawing 1 had high upside against certain higher casting cost spells like Kolaghan’s Command and Cryptic Command, and with the existence of 4 Gitaxian Probe, a huge part of the downside of a counterspell (leaving up mana and being unable to cast it) is mitigated.

I wanted 3 copies of this card after sideboard for Melira, Sylvok Outcast, and Spellskite as well as the mirror match. I felt similarly that drawing 2 copies of this card would result in losing the game, which is true of any removal spell you add to a deck like this, but much more true for one that requires you to pay 4 life to cast it.

An aside: I keep mentioning that drawing 2 of a certain card will likely result in losing the game and what I mean by that is with a deck like Infect, you usually need 2­3 lands, at least 1 creature with infect, usually 2 pump spells, and often you need a fourth type of card—either removal for Spellskite or Apostle’s Blessing/Distortion Strike to give your creature unblockable. When you need to draw a really unique set of cards to win, it is a huge cost to put random cards that don’t obviously fall into one of those categories. So far, Dismember helps to push through a Glistener Elf past a blocker and Spell Pierce can be another piece of the combo when used to protect your infect creature from a removal spell, but neither can contribute to a win against an opponent doesn’t offer any interaction. 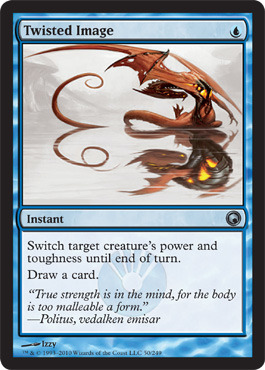 It was important for me to have 3 of this card after sideboard against Spellskite, Birds of Paradise, and Noble Hierarch. To facilitate my 20-card sideboard, I needed to have some mix of Dismember, Spell Pierce, and Twisted Image in the main deck and given that often Twisted Image can cycle into the cards I need while fueling delve, I felt it was a reasonable choice. I also felt strongly that Twisted Image was one of the best cards in my deck in the matchups I was most likely to lose—decks with main deck Spellskite and Abzan Company. 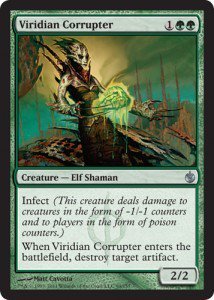 I have always played 1 copy of this card in the main deck and it’s been solid. It pairs well with Mutagenic Growth against Lightning Bolt decks, it combines with 2 Twisted Image and 1 Dismember to give me 4 total answers to Spellskite in game 1, and it pairs with my 1 sideboard Unravel to Aether to give me a reasonable chance of beating Chalice of the Void for 1. Chalice of the Void hasn’t been popular at all but it is very problematic, so completely ignoring it doesn’t feel wise. I made a personal rule for myself that in game 1 I refuse to keep any opening hand without an Infect creature, so a 13th card that’s required in my opening hand helps alleviate the headache of mulligans.

In the past, I have steered away from this card but I’m back and dead set on 4 copies. It’s small but I’ve run into multiple people who play with Warping Wail, Gut Shot, and Burst Lightning, and when those cards are popular, Mutagenic Growth is like a free Force of Will and the power of that effect can’t be understated. With the recent bans, Modern has opened up and it’s a wide open field with tons of decks—in that field, I believe the best way to build this deck is to build for speed. I’ve found that I can goldfish people and win the game on turn 3 much more often than other decks and when most of the people I play are woefully unprepared for this kind of matchup or bad matchups, I either get a quick win or my most likely path to victory in the bad matchups is to get a lucky hand that wins fast. Mutagenic Growth slots nicely into the deck with the rest of the pump spells.

Clearly 8 isn’t the 10 you need, but it’s common to get in 2 damage before you even have the mana required to start casting multiple pump spells. It’s very easy to play a turn-1 Glistener Elf, hit once, and hit with 8 points of pump for lethal on the next turn. Turn 1 Noble Hierarch, turn 2 Blighted Agent, turn 3 pump spells also produces the missing 2 points. Mutagenic Growth costing no mana to cast and reducing the cost of delve is enormous and the fact that the 2 cards work well together is convenient as well.

These are here against Burn decks but they also do serious splash damage to the Burning­ Tree Emissary/Reckless Bushwhacker decks that have gained in popularity. The combination of those decks having a painful mana base and the impressive stats on Kitchen Finks makes winning with damage common in those matchups. It’s the perfect card—it’s good when you’re losing, it’s good when you’re winning, it gets you somewhere on the board, it reduces the chances of getting burned out when you’re ahead on the board, and it’s a problematic creature that your opponent doesn’t want to kill. And sometimes, you play a Kitchen Finks, they Path to Exile it, and you use the additional land to power out an Inkmoth Nexus kill that wouldn’t be possible if you had fewer lands or if your opponent still had a Path to Exile.

Playing multiple copies of this card would hurt my own deck’s game plan, and I wanted something hateful against the Abzan Company matchup. This shuts off both Chord of Calling and Collected Company. I also liked having it because of the popularity of the Dredge deck online. I think Dredge is a really horrible deck and a good matchup for Infect, but if I wanted this card anyway, having a 1­-mana ace in a matchup I expected to be popular was enticing. 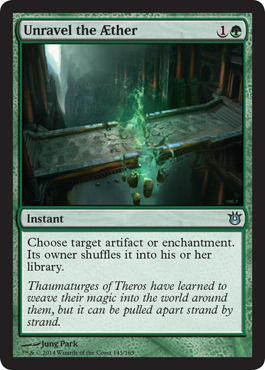 I had 3 Nature’s Claims in the sideboard and I played against Affinity or Lantern Control 0 times in all my matches played, which is odd. Out of respect for those matchups, I think it’s good to have 3 of my sideboard cards be dedicated to that anyway. I prefer Unravel the Aether because it gives me another out to Chalice of the Void on 1—often, Lantern decks will try to pair Spellskite and Ensnaring Bridge with Welding Jar, some Affinity decks still run Welding Jar, the shuffle aspect of the card dodges Academy Ruins, and a Bogles deck might put a totem armor enchantment on a Spellskite. These are all super small edges, but I never felt the downside of having it cost 2 versus 1, so I decided to be better prepared for disastrous scenarios.