Japan has been the source of a lot of incredibly valuable developments in world history, from the novel to instant noodles to the emoji. It’s worth keeping an eye on any hot new items coming from the Land of the Rising Sun, so when my friend Jamin Kauf—who lives in Tokyo—sent me a spicy Standard list that Itou Atsushi crushed the Hareruya LGS with, I sat up and took notice.

This deck is buck wild, and capable of some of the most ridiculous wins you’re likely to see. It doesn’t always fire on all cylinders, I have to admit, but when it does you’re in for a hell of a ride. It plays nineteen lands, a playset of Arclight Phoenixes, and zero red sources. Strap yourselves in.

Oh yeah. We’re really doing it. The central concept of this deck is to dump a bunch of Phoenixes into the graveyard, perhaps hitting some Narcomoebas and Crippling Chills as we do, and then chain together cheap spells in order to keep bringing back hasty 3/2s until we’ve got ’em dead.

Obviously the deck spins its wheels a ton, with a lot of “air” like Opt and Radical Idea. There are minimal interactive elements, and I’m not 100% on some of these numbers. The original list played Maximize Altitude, which I really didn’t like, a lot of the time there were no targets on my side of the battlefield. I upped the land count and added an Anticipate instead, a card I’ve liked a lot. 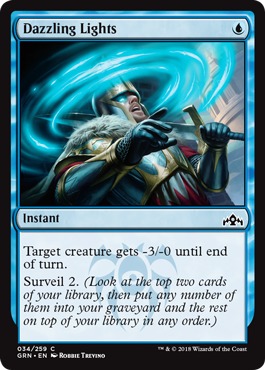 I don’t think this deck has reached its final form yet. I’d like to play around with the numbers of Anticipate, Blink of an Eye, and (weirdly) Narcomoeba, as I’ll discuss. Other cards under consideration include Chart a Course, despite its awkward interaction with Arclight Phoenix, Recollection, and maybe even something ridiculous like Dazzling Lights just to fuel the graveyard further.

I like the idea of more interactive options—I’ve cast Dispersal more than once and loved it—but being an essentially mono-blue deck severely limits the options, and countermagic is the wrong sort of interaction as you want to be proactive, not reactive.

I’ve had a blast playing this deck and highly suggest you give it a spin. In order to get a bit of a head start, here are some pointers to jump-start your self-mill career.

The single best card in this deck is Drowned Secrets, and you often want to mulligan any seven-card hand without it. It’s not just about chaining spells—you’ve got to fill your graveyard as you do so, and Drowned Secrets is simply the best way to do that. It’s all right to keep a solid six-card hand that lacks the enchantment, so long as it has cantrips to help dig to it.

Outside of Drowned Secrets, one of the fastest ways to put cards into your graveyard is to chain Mission Briefings. If you’ve got the time and the mana, try to flash them back as often as possible to hit those value Creeping Chills and Phoenixes. Additionally, look to time your milling judiciously—a good rule of thumb is that you want to be doing it as late as possible so you can untap, chain three spells together, and get in for a million.

The other card that mills you, of course, is Wand of Vertebrae. It’s a pretty middling card, in general, but don’t forget that it can shuffle those Creeping Chills you’ve cast or discarded back into your deck. Creeping Chill, by the way, is no joke—a free Lightning Helix to the dome can really turn the tide of a race.

The single worst card in the deck is Narcomoeba, which doesn’t really play into the deck’s overall game plan that well (despite its obvious synergy). In all honesty, most of the time it’s on chump-block duty, which is useful against aggressive decks, but you should look to board out this card whenever you don’t need random chump blockers.

It’s important to remember that the Phoenix triggers at the beginning of combat, not when you cast the third spell. This means that if your third spell put a Phoenix in the bin (Discovery, for example), it will still trigger and be able to attack that turn.

Against control decks—especially those with Vraska’s Contempt or Seal Away to deal with your Phoenixes—it’s sometimes possible to mill them out with your Drowned Secrets.

Don’t start doing this unless you’re going to commit to it, however. Generally, it’s only a good idea if you’ve got multiple copies out and have had some number of Phoenixes exiled.

Finally, my strongest recommendation when playing this deck is to be as lucky as possible. Unlucky players will always draw their Creeping Chills and Narcomoebas, and will end up feeling very silly as a result.

You know I love a transformational sideboard, and this 4-4-4-3 masterpiece is something else. Fifteen Islands results in nice, big, beefy Tempest Djinns, while Admiral’s Order is a necessary concession to removal spells like Settle the Wreckage (as well as Vraska’s Contempt, etc., but there’s nothing juicier than snagging a Settle with an Order).

Sleep is another way to help win races against go-wide decks, and while slow, can help you apply pressure while preventing an opponent from getting you dead too quick.

It’s generally a good idea to bring in creatures post-board no matter what, as opponents willaturally shave their removal suite after seeing your deck is mostly spells. Surge Mare, in particular, only has to hit once or twice before the value snowball starts rolling down the hill. It’s a terrific way to beef up your deck against control.

If you’re looking for a wild brew that will catch your opponents napping and leave them second-guessing your every move, this deck is a terrific choice!