For those who don’t know, I started to continue studying computer programming and system development. I’ve played tons of Artifact, Valve’s new online card game. I’ve been part of the testing group for a long time now and the game was just released. I stepped back from full-time MTG after three years because I felt like the time it took for me to continue wasn’t worth the time spent, and it didn’t get me where I wanted to be fast enough. But with that said, I haven’t stopped playing. I’m still following the scene, and the latest spoilers make me feel like a child at Christmas. I will try to prepare fully for the Pro Tours. The new announcement about the Magic Pro League, assuming it’s not all hype, helps me do it all. Before, I had to prioritize between the three. Now, I have to only focus on the Pro Tours, or should I say Mythic Championships, to stay on top of the competitive scene.

One thing that stands out to me from the new cards is a change of direction for design. I’m starting to see more and more cards that serve as solutions to multiple problems, with the most notable being Bedevil.

Artifacts, enchantments, and lands all usually require specific answers. Planeswalkers can as well, but they can at least be attacked if you don’t have the right removal spell for it in hand. But putting Disenchant in your main deck is a bad decision against too many decks in the field. Even if you slap cycling on Forsake the Worldly, it’s too much of a tempo loss to play more than one and have time to cycle them all if you draw multiples. Instead, you add those cards to deal with those kind of permanents in the sideboard, to have as few dead cards in your main deck as possible. But… what happens if we don’t have a sideboard? 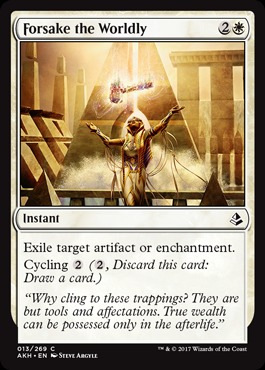 Naturally in best-of-one games there is no sideboard. More reactive decks will have to think harder about what your opponent could throw at you. If you’re proactive, there’s a good chance your own proactive approach will be enough enough to go over or under whatever your opponent is doing, especially if you’re already ahead. But that’s not the case for control decks that try to put a lid on all possible threats. The reactive deck would need to find faster ways to win, so that it doesn’t have to interact with everything. It has to buy time to get there, with finishers like Niv-Mizzet, Parun, or even cheaper ones. The other way would be to play an answer against whatever your opponent throws at you. This usually takes precise preparation and tuning, and a good knowledge of the format to get the numbers straight. Sometimes you will have to choose not to prepare for cards you don’t think will show up. The third possible way would be to have a lot fewer reactive decks. It’s too hard and takes too much work to get a good control deck to be competitive without a sideboard, it’s too hard to prepare for everything.

So what’s the solution? Design cards in such a way to create fewer non-games and make each match, even best-of-ones, feel meaningful more often. If I sit down for a match against an unknown opponent and they have a Treasure Map on turn 2 on the play, that goes under my counterspells. I’m not likely to win, since I can’t meaningfully deal with it.

It’s situations like these where cards like Bedevil, Mortify, Deputy of Detention, or to even some extent Absorb comes in. If I play against a red deck packing Banefire, there’s not really a way to interact without putting life gain cards into my deck that are useless in other matchups.

Another example is Ravager Wurm, a perfectly reasonable card in its own right, doing a really good impression of a slightly worse Glorybringer. But by slapping on a second ability to deal with the almost impossible to answer Azcanta, the Sunken Ruin, it becomes the real deal. It’s a simple formula. A card gives you two options. One option is a good-to-great Constructed card as-is and the other deals with something very precise. You might even see it on the new split card that follow the same formula, where one side takes cards of something in particular, and the other side is a fine Constructed card on most boards.

The future of card design doesn’t stop at addressing problematic permanents, it extends to interacting with spells, too. Take Gruul Spellbreaker. This card is clearly built to dismantle Settle the Wreckage. Slapping that second ability onto a great costed body is a way of trying to make sure that you can continue playing your game plan while being able to keep up with some of the cards you wish to see least on the other side. How does a deck like Gruul deal with Settle the Wreckage normally? Sideboard into other types of threats, like grindy planeswalkers and perhaps—if available—flash threats. Not very Gruul like.

Lastly, we want fewer non-games in Standard. Cards like Sphinx of Foresight help with exactly that in a very direct way, and we might see more like it printed. But cards that give you more options with your mana do that as well. Split cards, with both a cheap and an expensive side, and the keyword adapt, will make it less painful to flood on lands. This may be a product of the new play design team loving to have more options on card, which we can see on split cards and keywords like adapt, riot, and addendum.

In the spirit of best-of-one matches, here’s a new list, with a proactive game plan and answer to pretty much anything your opponent could muster!

Growth-Chamber Guardian seems sweet. Powerful, efficient, and grindy. Just how I like it.

Should Standard Always be Best-of-One?

So here’s the million dollar question: Should all Standard games be best-of-one, even outside of Arena? And additionally, should the trend of designing cards this way continue?

I think so. The upsides trump the downsides. The great thing with Arena and best-of-ones comes down to one major advantage: accessibility. Games on Arena are smoother, faster, and only having to play best-of-one means that I don’t have to be so enfranchised into playing Magic for a long time every time I feel like playing. It also means that you get the urge to play just one more game when you barely have the time. And another one. And another one. An enormous barrier has been lifted. Make Standard what it has always meant to be. Accessible.

Sure, removing the sideboard takes away one of the complexities from the game. Maybe having better answers won’t be enough to supplement the loss of sideboard options. But that’s also exactly the issue. Having the option to play Magic at the highest level without having to scavenge the internet for the perfect sideboard guide that only works for specific opponents and configurations is a big deal. Net decking, as badmouthed as it is, is actually great. Don’t forget that without a sideboard, building main decks will be even more complex. You can’t lazily sacrifice percentage against matchups and turn to your sideboard to bail you out.

Then comes the big question of increasing variance. Sure, best-of-three reduced variance in individual matches between two players, there’s no denying that. But how about doubling the rounds? Would you rather play 30 rounds of best-of-one or 15 rounds of best-of-three? How much more variance would that be? Sure, you might get unlucky in one of your matches and get mana screwed, but then you have the chance to play more after that. Guessing the right metagame also becomes a more strategic choice. With more matches against different opponents, there’s less chance to get unlucky even if you’re right.

One thing that’s important to notice is that I’m only a believer in best-of-one when it comes to Standard, not older formats. Not only do those formats need sideboarding more, but they are often played by a different kind of Magic player. Magic has a very differentiated audience. Some people only play Limited. Others play Standard, Commander, Legacy, Modern, Pai Gow Magic, and many others. Even more players play more than one format. But the way people play also differs and they play for different reasons. They also play differently through their career playing Magic.

I’m a bit of a multiformat person myself who enjoys playing Magic in many different ways. I, for one, grinded U/W Control in Modern in about 100 Competitive Leagues prior to the Team Pro Tour. I sculpted that deck and perfected its sideboard to the best of my ability. I love participating in tournaments and having the chance to solve the puzzle and outsmart my opponent. I also like playing a game of Arena when I have 20 minutes before I have to go to the metro. I even own my own Constructed Tribal Cube. The point is, for those who want to spend a long time perfecting their skills with a deck and building the perfect sideboard, there’s other formats like Modern, Legacy, and even Vintage for that. Not only is it more rewarding because there’s a deeper pool of knowledge to explore, but the format doesn’t rotate. This means that you can go as deep as you want and tune your deck as much as you like. Additionally, these formats have metagames that don’t move as much, meaning that there’s even less chance you’ll have to switch decks. Only hone your skills and deck slightly for a new metagame. Standard can instead be a place for those who want that accessibility and change, to try new cards and decks, and where getting new cardboard, whether it’s live or online, isn’t as expensive. They are not mutually exclusive, and just because the game is evolving does not mean that we have to throw the old game away.

Tags: Arena, Best of One, Best-of-Three