You might be thinking that I just did set reviews, and you wouldn’t be wrong. What I’d like to do now is check in on those reviews, and talk about the cards that changed significantly (in either direction) from my original rating.

It’s always interesting to see where my ratings change from my initial impression, and now that I’ve played the format a lot I have way more info.

For the selected cards, I’ll be presenting the original ratings and comments, with new ones below that. I’m also re-doing the Top 5 commons of each color, which also reflect how my opinions have changed on the format. 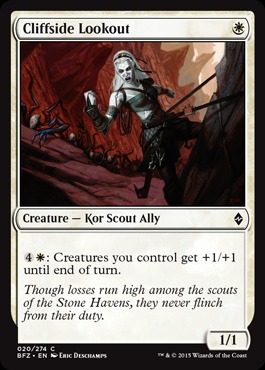 I’m not generally on the lookout for 1-drop 1/1s, though the ability here is of some interest. This is the kind of card you only want if your deck is full of creatures and fairly aggressive, and even then you will often find better finishers. The good news is that nobody else is interested in this card either, so you should be able to pick one or two up in case you end up in the swarm deck and need ways to punch through. Cards like Cliffside Lookout are often deceptive, because they are bad in most decks but have a very high top end when put into a deck that really wants them. I like having cards like this in the format, as they reward those who know when (and when not) to use them.

Fundamentally, Cliffside Lookout does what I expected it to do. In practice, more decks fall into the “wants Cliffside Lookout” category than I expected. Most white decks end up playing this, and getting a Lookout is actually a high priority once you have enough token-making or Ally synergy. 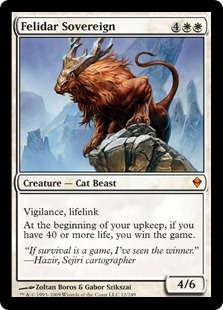 Felidar Sovereign really is a beast, and even if the second line of text never becomes relevant, it will do a lot of work. If your opponent doesn’t have a removal spell, this makes racing nigh-impossible and gives you a huge threat. This is a classic 6-mana bomb, which only suffers in this set because there are plenty of cards that can go over the top. The nice part is that any deck can cast this, not just dedicated ramp decks, and as such I’d expect it to be picked early just about every time.

Felidar Sovereign is less of a windmill-slam bomb than I expected. It’s not as big as some of the uncommons or even commons, and white decks are often more about swarming the opponent than playing one big threat. Add that to the vulnerability to removal spells like Clutch of Currents or Tightening Coils and you have a card which is good but not great. You should still pick this most times you see it, but there are plenty of uncommons worth taking over it. 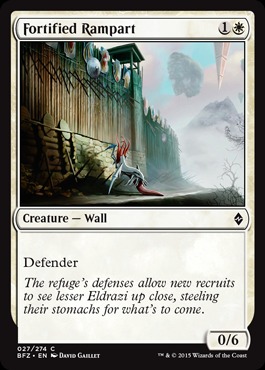 Even as a blocking aficionado, I tend to like my defenders to have a little bite. This does the job of keeping a ground creature back, sure, but having zero power means that it can stop one creature at most. If you need a 2-drop in your defensive deck, this does fill that role, but it can never overperform.

A minor upgrade, but worth noting that in the UW Fliers deck or any controlling white deck, Fortified Rampart is quite good. 2-drops are scarcer than I realized, and having a play on curve is a valuable asset. 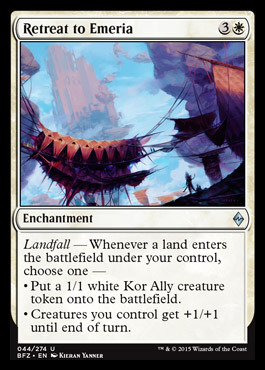 This Retreat combos quite nicely with itself, as it can make a ton of 1/1s and then send them in as 2/2s. It’s a good aggressive card and even a decent defensive one, which makes it a card that most decks will be interested in. Making Allies means that it’s the perfect enabler for an Ally deck, and even in a non-Ally beatdown deck it can really pressure the opponent.

Retreat is a true bomb, and one you should rarely pass. It’s incredible in any Ally-based deck, and even with no other synergy, it’s a fantastic card. This rose very highly in my estimation after playing with it only a few times. 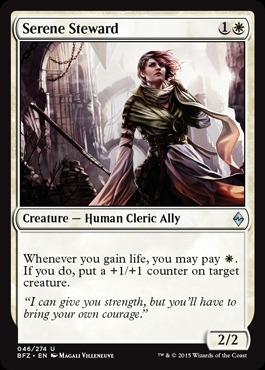 White seems to love 2/2s for 2, especially when they happen to be Allies, so I’m fine with playing this even in a deck that can’t gain life. In part that helps conceal how good it is when you can gain life, as most people will assume you are just running this is a 2-drop. That can set up some nice ambushes with Tandem Tactics, which is a nice upside to have on your curve-filler. If you have no life gain and no Ally synergy, cutting this is reasonable, though I still think you will play it more often than not.

This rating is a little deceptive, because Serene Steward is still a synergy card, but I wanted to reflect how good it is in the life gain deck. This is one of the most desirable engine cards, and it only takes a combo or two before this becomes worth starting. 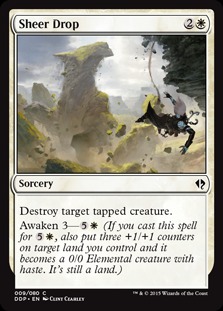 This card is a sheer beating when you pay the awaken cost, and that cost is low enough that it will happen fairly often. Sheer Drop is flexible and powerful, especially for a common. It’s hard to play around, as your opponents can’t really justify not attacking, but if you are at a low life total you may not be able to afford to take a hit before killing the creatures you really want to kill. Either way, this is one of the stronger control cards white has access to, though its relative weakness in aggro might make its stock drop.

As is only appropriate, this was one of the most sheer drops in rating. Being bad in aggressive decks and costing a lot even in controlling ones makes this a solid playable instead of a high-priority one. I’d take Gideon’s Reproach or Smite the Monstrous over Sheer Drop at this point.

This was mostly a reshuffle, but Ghostly Sentinel cracked the top 5 over Tandem Tactics. UW Fliers is just a great deck, and cards that go in that deck are among the best white cards to take early.