The legendary sorceries haven’t gotten much love in Standard, which is at least somewhat understandable. They’re difficult to cast, and despite offering enormous power, it’s hard to set up a situation where they can do their best work. Harnessing their potency, however, isn’t such a tricky puzzle to solve—just play a bunch of legendary creatures (some of which are even good cards), and get it done, right?

Carl Gentry submitted a list for us to get across this week, and we couldn’t wait to play it. All legends, all day, plus a couple of legendary sorceries! Urza’s Ruinous Blast is a crazily powerful card, acting as a 5-mana Plague Wind with upside when the stars align. And when your deck is nothing but stars, they tend to line up a lot! 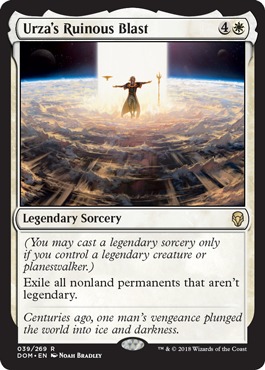 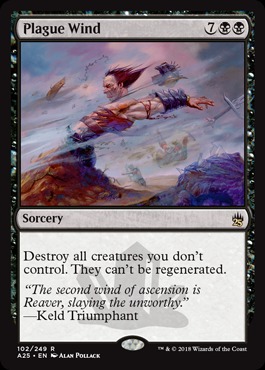 This deck is all about enabling Urza’s Ruinous Blast as a Plague Wind plus, and gets great value from Jaya’s Immolating Inferno as an insane finisher. Playing with these cards, however, locks us into some pretty heavy deck-building requirements—we need legends, and lots of them. Further, any non-legendary permanents just become liabilities when you’re seeking to Blast off, so why play any at all?

Happily, there are a few Constructed-tier legendary creatures in the Jeskai colors, especially at the top end. No one can deny the power of Lyra Dawnbringer, and she works in concert with both Shalai, Voice of Plenty and Aurelia, Exemplar of Justice to close out games very quickly.

One of the sweetest aspects of this deck is its capacity to play entirely at instant-speed with Raff Capashen, Ship’s Mage. If you thought Urza’s Ruinous Blast was good during your main phase, wait until you cast it during an opponent’s end step, after they’ve deployed an extra turn’s worth of threats. There’s a reason it’s a “ruinous” blast, rather than just a regular one.

Things get a bit iffy lower on the curve. Tetsuko Umezawa, Fugitive serves no other purpose than to be a 2-mana legend so an early Blast is more likely to be available, although she can get in for a bit of damage here and there, and does block well as a 1/3. Tajic doesn’t do much either, but is a pseudo-Shalai against direct damage.

Unlike these examples, however, Captain Lannery Storm—CLS herself—is a truly excellent inclusion, for one simple reason. Thanks to her Treasure-generation ability, you can curve CLS into URB on turn 4, and then attack for another 3 just for good measure. Most opponents simply can’t come back from a huge swing like that!

In many respects, this deck plays out like a typical midrange list—deploy your own threats, answer opposing threats, and edge ahead with the raw power of your cards. But it also has a few “oops, I win” cards in Urza’s Ruinous Blast and Jaya’s Immolating Inferno that absolutely go to town on any deck seeking to play to the board.

You can still play an honest creature-based game, curving into Lyra and messing with opposing disruption thanks to Shalai. Sometimes, you don’t even need a legendary sorcery to win. Every now and again you’ll end up with a really aggressive hand and beat down by curving Tetsuko into Tajic into Aurelia, but aggression shouldn’t be your primary position.

Instead, play to maximize the impact of your heavy hitters. Prudent defensive play will power up Blast and Inferno by encouraging opponents to play to the board, and push forward once the wind changes in your favor.

One enormous caveat is, of course, that the legendary sorceries do stone-cold nothing when drawn on an empty board. For that reason, it’s sometimes worth sandbagging an otherwise useless Tetsuko Umezawa for a few turns against a board your opponent is dominating. If you have seven lands, hold onto Tetsuko until you draw the Blast, then cast both in the same turn rather than have her die to removal and blank your draw steps.

Finally, remember that Urza’s Ruinous Blast doesn’t remove opposing legendaries, including Niv-Mizzet and Teferi. Stockpile a massive Inferno to deal with these problems!

As with any deck that requires a critical mass of a certain type of card to function, you can’t go too deep while sideboarding with this list. Always remember that the legendary sorceries do literally nothing without a legendary creature in play, and avoid the pitfall of taking too many out!

Aggro decks can be dispatched relatively easily with a timely Blast, Inferno, or Lyra, but failing them you might have a tricky time. Take out Tajic and a couple of Raffs to instead play Deafening Clarion, which will help stabilize (and gain a stack of life to boot). Remember that Tetsuko is an excellent blocker against all the little x/1s of the format.

Against midrange, you don’t need to go too much bigger than you already are, as a single Blast or Inferno can put the game out of reach (not to mention those games where they just can’t answer your Lyra). Star of Extinction is important against Carnage Tyrant, and The Immortal Sun contests cards like Vivien Reid. Lava Coil doesn’t always line up well against their threats, so it’s usually a safe cut.

Control decks are nightmarish. They have countermagic for your big plays, and legendary threats that wreck your Urza’s Ruinous Blast Plan A. Sub out small creatures like Tetsuko to bring in huge heavyweights like Niv-Mizzet and Nezahal, and take out useless Lava Coils for counterspells to fight on the stack. Karn’s Temporal Sundering is usually better than Urza’s Ruinous Blast, especially if you have a board set up—bounce their fresh threat and enjoy a second helping of lunch.

Next week, we’re charting a course to dangerous waters. Legends tell of a place out on the combo sea, where a storm has been raging for a millennium. We’re heading there to find out what this thousand-year storm is all about. See you then!