Gaea’s Cradle is a fine card, I guess, except when you don’t have any creatures out, in which case it’s about as useful as an ejector seat in a helicopter. But wait, what’s this? Gaea’s Cradle, in Standard, without the no-creature downside? Itlimoc, Cradle of the Sun is an all upside, mana-producing powerhouse, and even when things aren’t going your way, it taps for green! What’s that? Flipping it from the enchantment side? Buddy, if I had known you were going to rain on my parade like this, I’d have brought an umbrella. 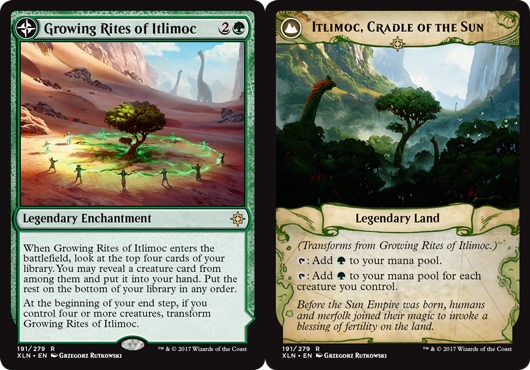 Sure, it takes a few hoop-jumps to get Growing Rites of Itlimoc to flip. No worries—fill a deck full of cheap creature-based ramp enablers and massive creature-based ramp payoffs, and you’ll be swimming in mana like the Blind Eternities’ version of Scrooge McDuck. With such potent mana sinks available in Standard right now (Biogenic Ooze, Hydroid Krasis), having more mana than you know what to do with can lead to some pretty busted plays.

This deck came to the Arena Boys from Stephen Campbell, an old guard Magic veteran from my hometown of Melbourne, Australia. Stephen helped me grow from a bad kitchen table player into a bad competitive player, and I owe much of my early career to his support and guidance. Thanks for everything, Stephen, and thanks to all the old mentors out there, welcoming us all into the fold. We young whippersnappers don’t say it as much as we should, but we never forget the impact you have on us as up-and-coming wizards.

This deck is built around the classic ramp strategy of early enablers into accelerated payoffs. If anything, it definitely errs on the side of enablers rather than payoffs, with a heavy focus on cheap creatures. Llanowar Elves is an obvious inclusion, but Saruli Caretaker? What’s going on there? Well, not only is it another 1-drop in order to maximize your chances of flipping the Growing Rites, it’s also excellent with your 2-drops—both Emmara and Saproling Migration can come down after a Caretaker and allow it to then cast another 1-drop.

Towards the top of the curve, all the payoff cards have been specifically selected to put the abundance of mana you’ll inevitably have to best use. Biogenic Ooze spits out tokens and Shalai is a flying Gavony Township, while Vivien, Huatli, and of course Hydroid Krasis help find you more cards so you can spend more mana.

There are a few backup plans, however. Song of Freyalise can help build a massive board (particularly with Saproling Migration) that then gets in for a big alpha strike a few turns later, while Dawn of Hope is another place to dump your mana in grindier games. Finally, this deck also gets to play a smattering of interaction—Incubation // Incongruity is a great utility card, either digging for action or taking care of an opposing Krasis or Phoenix.

Finally, a quick note on the mana base: as we mentioned in the video, according to Frank Karsten’s legendary article, this mana base is pleasingly perfect. 14 untapped green for Llanowar Elves, 13 white for Emmara, 16 green for Biogenic Ooze’s ability, and eight blue for Hydroid Krasis.

If you’ve ever played a ramp deck before, you’ll know how you want the game to go. Set yourself up with early plays like Llanowar Elves or Incubation Druid, then transition swiftly into the part of the game where you’re putting 6 power into play on turn 3 and cracking more skulls than a clumsy archaeologist. It’s essentially idiot-proof, which is one of the reasons I like ramp decks so much.

There are a few things to keep in mind. This list is cold to sweepers, so be sure you know what you’re doing when deploying threats and enablers. For example, if you don’t need 1 extra mana next turn, just sandbag that Incubation Druid. You can cast it post-Wrath and start getting in with a 3/5. Rely on “army-in-a-can” threats like Biogenic Ooze, and don’t over-commit.

Secondly, utilize your noncreature threats to maximum advantage. Having Huatli, Dawn of Hope, or Vivien ticking away while your opponent tries to control the board is the best way to accrue value against a slower, more controlling deck. Conversely, against grindier midrange strategies, remember that you have a very powerful lategame but very little interaction, so it’s wise not to hold back (although keep Find // Finality in mind against Sultai).

Keep in mind the little tricks and weird interactions that come up with this deck, especially with Growing Rites. For example, if Biogenic Ooze gets you to four creatures with Rites out, you can flip it with the +1/+1 trigger on the stack and tap Itlimoc for exactly 4 mana to make another Ooze. Also, playing 1 mana creatures or Saproling Migration with a flipped Rites is “free”, as they replace the mana you spent.

Stephen has continued to work on the deck even after we recorded the video and took it in an interesting direction. Song of Freyalise, despite leading to busted board states every now and again, was a bit of an under-performer. Instead, to shore up your weakness to sweepers, in comes Unbreakable Formation.

Much of this is just tweaking numbers (drawing the second Rites feels horrible), but the inclusion of Unbreakable Formation both protects you from sweepers and allows Song-like alpha strikes. Don’t forget that Unbreakable Formation puts a counter on Incubation Druid, which can attack and then tap for 3 mana!

Marwyn is a bit experimental but given there are a few Elves kicking around in the list (not to mention the +1/+1 counters), she might be able to generate a ton of mana as well. Finally, your friendship with Huatli is ended. Now Vivien is your best friend.

On the docket for next week, it’s Revel in Riches! We’re looking forward to losing a lot of games before realizing that the real treasure was the friends we made along the… nope, that’s not true. I’d rather just win game, to be honest.