This week, we played a list that was bad even by our standards. We compiled an aggregate list of all the cards we’ve played since Arena Boys began last year, and turned it into one of the messiest decklists you’re likely to see. As the video proved, it was absolute garbage fire, which means it was entirely in keeping with the overall philosophy of the Arena Boys.

After mucking around with this list for a little bit, we played with some of the other decks we’d really enjoyed so far–it was a nice trip down memory lane. It’s been a fun format to explore over the past year or so and has enabled some very silly things. We’ll miss Llanowar Elves, we’ll miss Zacama, but most of all, we’ll miss our precious Treasure Map. At least we got to forget to scry on upkeep one last time this week.

We now turn our eyes to the future. Throne of Eldraine is upon us, and we’re ready and raring to go. Already, we’ve put together a shortlist of the cards we’re most excited to play, and some rough drafts of the decks you can expect to see in the coming weeks and months. Let’s get to it!

After the rousing success we had with Dread Presence, it won’t surprise you to learn we’re keen to run back a bit of mono-black. Ayara is another powerful mono-black card, although she forces us to go in a different direction entirely. We must play as many creatures as possible to get maximum value from Ayara, so why not just play all creatures?

We pull together an Aristocrats-themed deck here, with recursive cheap creatures to feed to our sacrifice outlets. Ayara, Cavalier of Night, and God-Eternal Bontu all demand offerings, and cards like Gutterbones are the perfect sacrificial lambs. On top of that, we have disruptive creatures! Murderous Rider and Burglar Rat represent interaction (in addition to Dread Presence, of course). 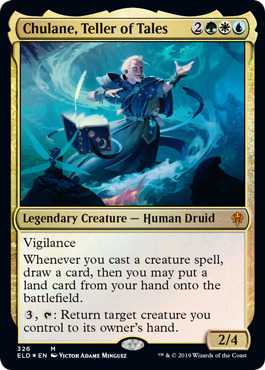 We’ve played a fair bit of Prime Speaker Vannifar in our time, and we’re ready to run it back with another juiced-up creature-based engine. Chulane, Teller of Tales is the perfect way to keep the value engine humming along in a deck filled with creatures that have enter-the-battlefield effects, working together with Vannifar to ensure you never run out of action.

Podding all the way up to End-Raze Forerunners is the name of the game, gaining as much incremental value as we can along the way. Everything from Risen Reef to Harmonious Archon provides material advantage on its way down–and let’s not forget how incredible Charming Prince is in this deck, allowing you to rebuy another creature’s enter-the-battlefield effect! 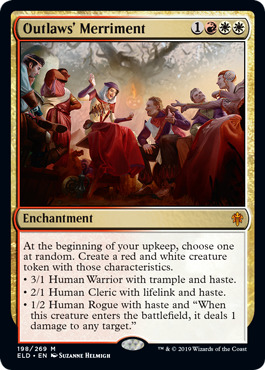 Divine Visitation is one of the sillier cards in Standard, but it doesn’t muck around once it’s online–even with the departure of some of its comrades-in-arms such as Legion’s Landing and Goblin Instigator, it’s still ready to put in the work. There are a few new token generators and payoffs in Throne of Eldraine, none more exciting than Outlaw’s Merriment. Rather than making 3/1s and 1/2s, however, why not just make 4/4s? Seems a little better.

Token enablers are a little thin on the ground, especially at the lower end of the curve, but we can get by. The Goblin sub-theme means Krenko can get buckwild, while Harmonious Archon at the top-end provides another sweet finisher that synergizes with all the tokens we’ll have flying around (although not with Divine Visitation). This deck still feels a bit rough, but I’m confident it’ll create some incredible moments.

Torbran and Cavalcade of Calamity are an incredibly scary combo–Cavalcade is hard enough to beat sometimes when your opponents spews out a bunch of 1/1 that all attack for two or more, but with Torbran up in the mix, Cavalcade means they’re now getting in for six!

Things get even more ridiculous when Chandra’s Spitfire gets involved, of course, but the really stupid card here is Scampering Scorcher. With Torbran and Cavalcade, an unblocked attack from a hasty Scorcher and friends is eighteen damage! Finally, the go-wide approach and mono-Mountain mana base means that Castle Embereth is set to do some real work.

No matter what, we’re going to have a lot of fun in the coming weeks and months with everything that Throne of Eldraine is bringing along. But what have we missed? If you’ve been working on a sweet list that you think would be a good fit for the Arena Boys, please send it through. The best place to do this is on Twitter–either @thearenaboys, or me personally @rileyquarytower!