A few weeks ago I wrote an article comparing Abzan Company to Splinter Twin. While Abzan Company may have been hot out of the gates after the Eldrazi bannings, the deck didn’t quite live up to its high expectations and light the world on fire thereafter.

I admit, I may have been a little bit hasty to draw comparisons between a known long-term winner and a relatively new “top dog” type deck. Nonetheless, while Abzan Company may have fallen from its presumed pedestal as “the best deck in Modern,” it is still a very solid choice. Even if the deck isn’t #1: it has two very solid plans, one of which is an infinite combo! 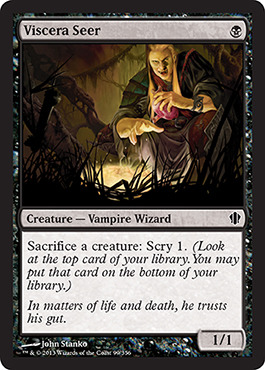 I got a chance to play the deck a ton in the past 2 weeks and really enjoyed the play experience— I’ve also gotten solid results. I went 6-3 at the Indianapolis Open, undefeated and scooped in the finals of a GPT, and 11-3-1 for a 63rd place cash finish at #GPCharlotte.

Company is a messed up Magic card and the deck is designed to make great use of it. It is very difficult to lose games where you are able to cast and resolve Company. The mana and card advantage is dramatic.

The big difference between the list I’ve been playing and the more common version of the deck is that I have another infinite combo built into the deck: 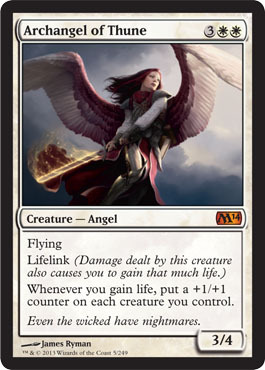 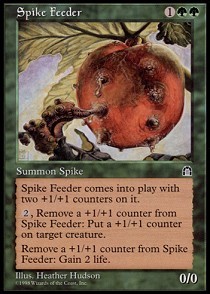 Typically, the Abzan Company decks don’t play Archangel of Thune and there is a totally different Abzan Midrange deck that focuses going infinite with the Angel Feeder combo. It makes sense since you can’t exactly Collected Company into 5-drops!

A couple of things I noticed after playing the deck a lot in the past few weeks:

1. People have a ton of hate for Abzan Company in the form of graveyard haters like: 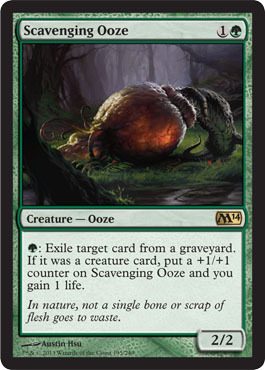 2. It is very hard to assemble a 3-card combo win against removal-heavy decks like Jund and Jeskai Control.

First of all, let me just say that you don’t need to “combo out” with Archangel for the card to win games.

I felt the matchups against various removal-heavy control decks like Jund and Jeskai were close. I also noted that I almost never set up and executed my combo against either of these decks. In fact, the infinite life combo is completely useless against Nahiri Jeskai because they can use Emrakul, the Aeons Torn to deck you. Tron and Ad Nauseum pose the same problem where they can defeat infinite life (Karn Liberated and Laboratory Maniac) so you can’t just hope they can’t beat it. If they can get control of the game and stop you from killing them, they will eventually prevail.

I played about 20 games (half sideboarded) against Jund before the GP and while I won more than half of the games, I gained infinite life exactly 0 times. I was winning by grinding my opponents out and by killing them with damage. Not relying on the infinite life combo and having more robust threats became increasingly important in post-sideboard games when opponents had lots of hate directed at defending against my combo by attacking my graveyard.

Archangel of Thunes is a great solution to both of these problems. First of all, the card basically demands an answer immediately all by itself or it will win the game in short order. Even without a Chord to find Spike Feeder and win the game on the spot, the Angel will run away with the game.

It is also extremely important that Angel has 4 toughness—meaning it survives both Lightning Bolt and Anger of the Gods.

You may also notice a theme that I have built into my deck of trying to have access to as many 4-toughness creatures as possible post-sideboard against Anger of the Gods and Lightning Bolt decks. 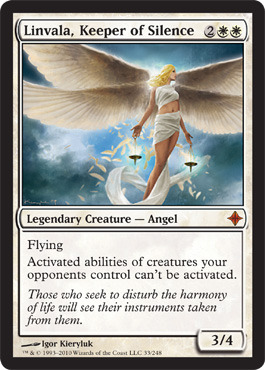 It is important to not get completely blown out by Anger of the Gods. Anger is always going to be good against you, but I try to mitigate being completely colded by it.

The Courser of Kruphix was by far the “most overperforming card” in my 75 over the courser of the weekend. I simply can’t say enough good things about it and am going to be very open minded to putting Mr. Kruphix into more decks moving forward. It blocks all of the Zoo creatures, doesn’t die to 3-damage spells, gains life, and generates card advantage. Seriously, what more can a card do?

Also, the card is a nasty combo with Archangel of the Thune and fetchlands. I was pretty fond of the split between Courser and Feeder. I like having the Feeder to tutor up, but the Courser was really good by itself.

Linvala, Keeper of Silence was in my sideboard primarily as a trump in the various Chord of Calling deck mirror matches. But I didn’t play against that matchup even one time over the weekend! I continued to be impressed with Linvala, Keeper of Silence as a card that I brought in against Jund that did great work at shutting down their Grim Lavamancers and Scavenging Oozes.

In fact, in nearly every matchup (besides decks that would obviously be cold to the combo), I boarded out significant chunks of my combo pieces in order to be more of a midrange grindy aggro Company deck. Most decks have to respect your combo, which allows you to fight them on a different axis.

I really enjoy playing the deck because it affords me a ton of decisions both in my games but also in the way that I build my deck and how I sideboard in between games. With all of the tutor effects, you have a chance to find your awesome bullet cards exactly when you need them and they will be great.

On top of all that, you get a combo that beats a pretty significant chunk of decks in game 1 if you get it online. If you are looking for a deck that is fun, flexible, and offers the ability for personal customization, Company is a good place to start!