Today I wanted to take a quick look at a new Modern deck that broke out at a 130-player “Poro Tour” tournament 2 weeks ago in Finland. It was played by Leo Lahonen, a member of the Finnish national team that finished in the Top 8 at the 2016 World Magic Cup. (The Fins must love their puns, as Lahonen registered as a member of team “Almost Finnished” for the Pro Tour Team Series and “Poro” is apparently Finnish for “Reindeer”.)

At the World Magic Cup, Lahonen was setting up effective turn-2 kills with his Blue-Red Kiln Fiend deck. At the “Poro Tour” event, he registered a 150-card deck with a dazzling number of options and combos.

Three years ago, I wrote an article titled “Is Playing More Than 60 Cards Always a Bad Idea?” which couldn’t be more relevant now. My conclusion was that, although it’s typically best to stick to the minimum of 60 cards, there are exceptions. Two of those exceptions apply to Leo Lahonen’s deck:

All in all, there are valid reasons for playing more than 60 cards.

But there are also drawbacks.

Naturally, the biggest drawback to playing more than 60 cards is that it substantially reduces the probability of drawing your best cards. A regular Scapeshift player will draw Search for Tomorrow, Sakura-Tribe Elder, Remand, Bring to Light, and other top-quality cards about 2.5 times more often than Lahonen would. That is a noticeable difference, and 150 cards is arguably too much.

In the end, it’s a trade-off between the advantages and the disadvantages, and subjective judgments are needed to put relative weights on them, so it’s hard to pinpoint an “optimum” deck size. But let’s at least do some quantitative analysis to get some insights.

Since the only card that explicitly cares about deck size is Traumatize, I’ll focus my analysis on that. 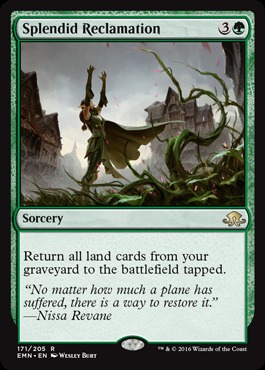 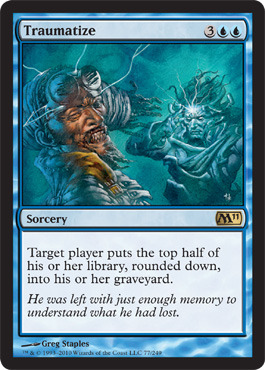 Imagine the following sequence: Turn-2 Sakura-Tribe Elder, turn-3 Cryptic Command, turn-4 Bring to Light into Traumatize, and turn-5 Splendid Reclamation. That’s pretty good, but it only works if your deck size is large enough for Traumatize.

I will focus on the following scenario: We remove a Traumatize from our deck, along with 10 random cards. These 11 cards represent our opening hand and draw steps up until turn 4-5, and I’ll refer to them as “our draw.” For simplicity, I purposefully disregard several aspects: I assume that we have enough mana sources to cast Traumatize, and I disregard the deck thinning effects of cards like Sakura-Tribe Elder. Then, we put Traumatize on the stack.

These success definitions disregard various unlikely combinations for simplicity. For instance, “1 Valakut and 11 fetchlands” isn’t included, but that’s not unreasonable because our opponent might be pressuring our life total too. Another example is that a fetchland configuration of 4 Flooded Strand and 4 Polluted Delta still counts as a success, even though it can’t search enough Mountains. I wish I had more time to refine definitions and calculations, but I expect my approach yields at least a solid approximation.

Under my assumptions, we are 77.3% to have a successful Traumatize.

For Leo Lahonen’s original deck, the probability of success would be 56.2% for type 1 and 21.1% for type 2, for a total of 77.3%. That’s reasonable, especially considering that if we miss, there is a good chance of being able to flashback Unburial Rites as a consolation prize.

Naturally, I can do the same analysis for any other deck sizes, but for that we need to specify the land distribution for different deck sizes. Here, I’ll make the following assumptions:

The results are as follows.

The seesaw pattern is because the number of lands is rounded for every deck size.

What you see is that the probability of type 1 success (at least 6 Mountains milled) stays relatively stable throughout, although it is a little lower for smaller decks. An intuitive explanation is that for larger decks, Traumatize comes close to milling 50% of your actual deck—the top 11 cards from your draw don’t have a large impact. For smaller decks, Traumatize mills noticeably less than 50% of your deck because the top 11 cards form a more substantial chunk of your original deck, which implies that the chance of milling at least 6/13 Mountains decreases.

The type 2 success (at least 2 Valakut and a bunch of fetchlands) also stays relatively stable between 110-150 cards but then drops off as well for smaller decks. The intuitive explanation for this is that smaller decks contain fewer fetchlands and therefore have a smaller chance of milling enough of them.

So How Many Cards Should You Play?

Although I think Leo Lahonen may be on to something, I think 150 cards is too many. I think it’s safe to go down to 120 cards. At least the resulting deck will be slightly easier to shuffle. More importantly, as I showed, this reduction won’t substantially hamper the consistency of the Traumatize/Splendid Reclamation combo. But it will increase the likelihood of drawing your best cards by 20%, which is a huge difference.

We could reduce deck size even further, potentially going as low as 100 cards. (I wouldn’t go lower than 100 cards because then, according to the above figure, the Traumatize/Splendid Reclamation consistency drop becomes marked.) The reason why I’d stick with 120 cards for the time being is that I want to qualitatively take into account the benefits of an improved mana base and a lower probability of drawing silver bullets, and at some point I’m not sure what to cut anymore. So 120 seems like a good compromise to start from.

It wasn’t easy to cut 30 cards from the deck, but my first suggestion would be to start with this.

I can’t confidently claim that this build is better than a 60-card Scapeshift deck, but the deck is competitive, and hilarious to boot. Just imagine the look on your opponent’s face when you put down a 120-card deck! Priceless.

Now imagine you do that at the Team Grand Prix in San Antonio (April 1-2). It won’t be easy to run a 120-card deck with the Team Unified Constricted restrictions, but if you can convince your teammates, then your fun will be tripled!