Hour of Devastation is out! At least, it is online, and I’ve had the opportunity to draft it a few times so far. One of the first things I noticed was how some cards became significantly better—and some much worse. Let’s get to it. 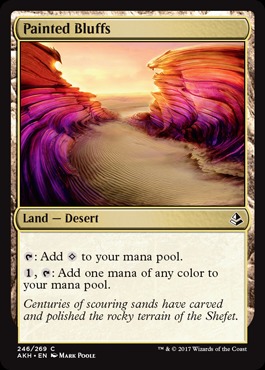 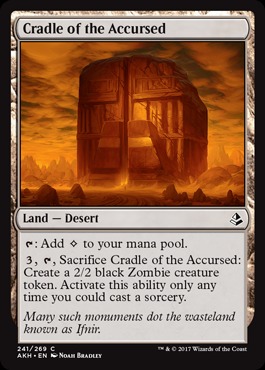 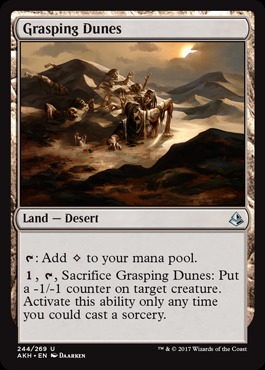 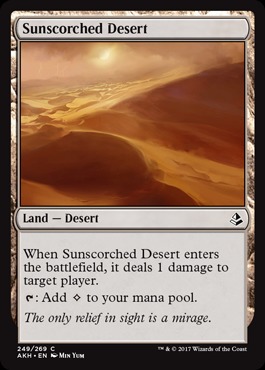 These are all way worse than the Deserts in Hour of Devastation. Still, sometimes you start pack 3 with a Sand Strangler, a Gilded Cerodon, and an Unquenchable Thirst that you picked up, but just weren’t able to wheel any of the enablers because people took them highly. Well, don’t be ashamed to run that Painted Bluffs and Sunscorched Desert.

In the previous format, these cards rarely made your deck because their abilities just aren’t great. The Desert type now makes them much more valuable. 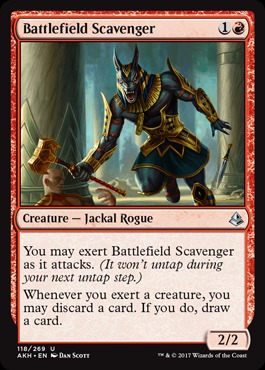 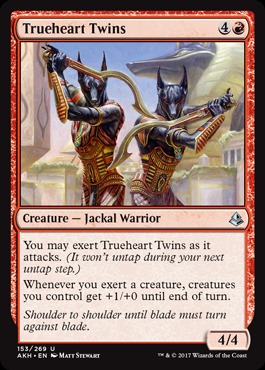 These two cards from Amonkhet are the only ones that trigger on other exerts. Especially Battlefield Scavenger—activating cards like Steward of Solidarity and Fervent Paincaster without using the combat step makes it really hard to stop, and as a result of the flexibility, a much better card than it used be. It was already great—it is now an A+.

Trueheart Twins, on the other hand, will still require you to use the combat step to take full advantage of its ability, but it happens to work really well with Steward of Solidarity, making a bunch of tokens that you can pump. 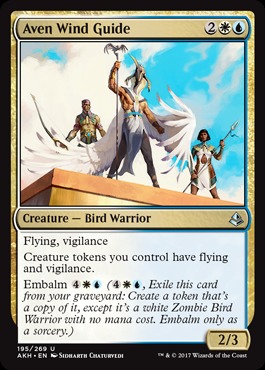 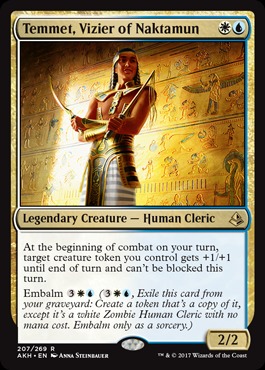 Again, these are great cards, but eternalize puts Aven Wind Guide and Temmet, Vizier of Naktamun over the top. With embalm, you gave evasion to smaller creatures—eternalize guarantees you give evasion to a 4/4. Sinuous Striker gets in for 7 unblockable damage? Seems good. 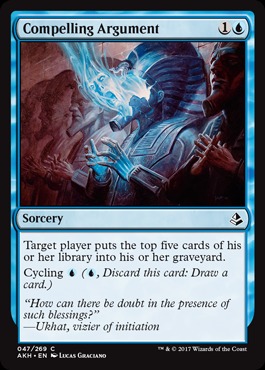 It’s a little early to call mill a viable archetype yet, but Fraying Sanity alongside Seer of the Last Tomorrow, Ipnu Rivulet, and Compelling Argument can kill someone relatively quickly.

You just have to make sure not to face Struggle // Survive… 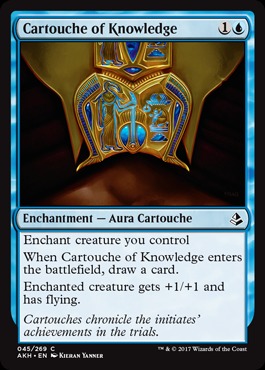 I always had issues putting Cartouche of Knowledge into my blue decks because they were always defensive, low creature count decks. In the new set, it seems like blue is pushing toward being more aggressive with the printing of Spellweaver Eternal, Cunning Survivor, and Aerial Guide.

Gate to the Afterlife just gained a few more words—naturally it has to be “better.” Playable? Still debatable.

God-Pharaoh’s Gift is a hell of a card when on the battlefield. I imagine it is a really, really, good cycling deck payoff. 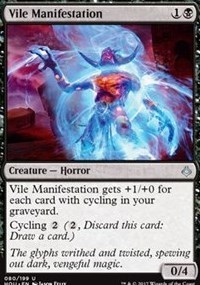 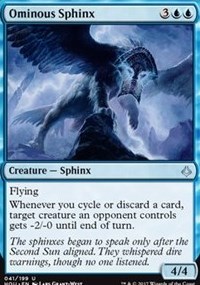 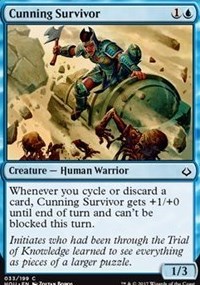 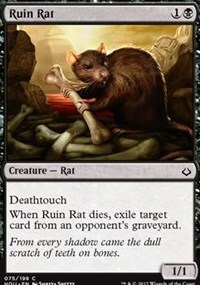 In general, cycling decks have gotten much better. Vile Manifestation and Ominous Sphinx are big rewards. Cunning Survivor is a fine card to hold the ground. Ruin Rat is a great blocker that deals with embalm and eternalize attackers, which gives you time to assemble the cycling shenanigans. 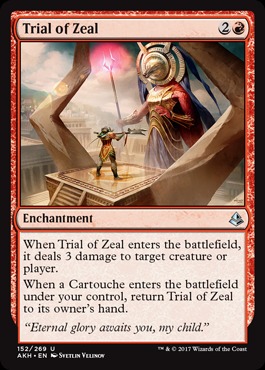 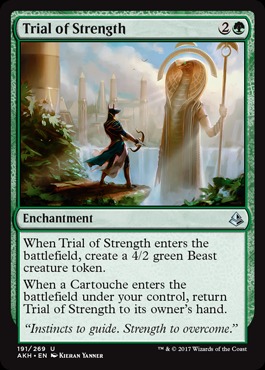 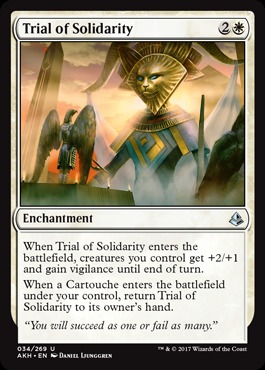 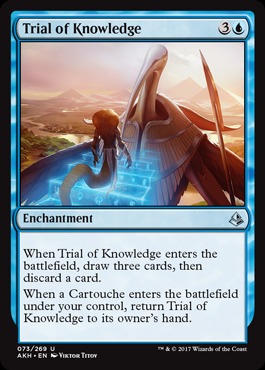 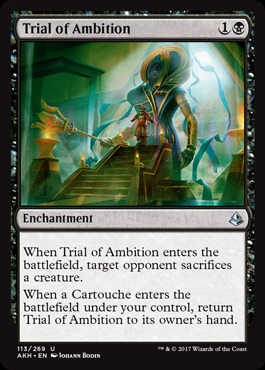 Only one pack of Amonkhet means fewer Cartouches and Trials, mutually making each other lower picks than they were.

The white one didn’t get much worse, since it was the kind of card you needed to rebuy to get a great deal out of it.

The blue one, on the other hand, was merely just okay on its own—if you can’t rebuy it as often, it gets much worse.

Cruel Edict is also much worse if you can’t rebuy it. You usually hit a low drop, which is a fair exchange. It was when you could knock down a 1-toughness creature with Cartouche of Ambition then get a big creature off the board for 2 mana that it was amazing.

Trial of Zeal is still great, of course. Open Fire is a massive favorite for best common in Hour of Devastation, yet, it means that this kind of effect won’t be as rare. If you’re not getting Cartouches for the Trial, then it’s just a sorcery Open Fire, and if you already have two or something, you might be looking for something else to round out your deck.

A 4/2 for 3 mana really is just okay. That’s sometimes more reliable than Sidewinder Naga, but that’s it. Especially since Cartouche of Strength is a premium removal, don’t expect other green drafters to pass them to you. 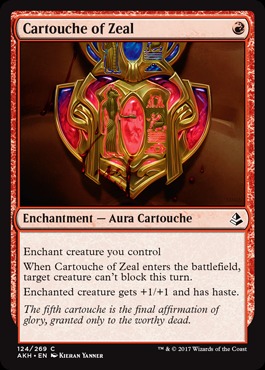 These two Cartouches were specifically high picks because they cost just 1 mana, making it easy to rebuy Trials. They’ll remain good cards that you will play in your aggressive decks, they just won’t make your midrange decks as often anymore. 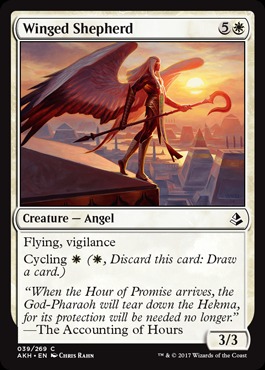 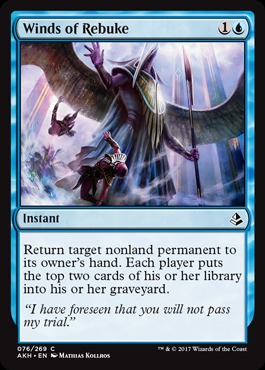 Similar to Trial of Zeal, these two cards suffered from redundancy.

Angel of the God-Pharaoh is very similar to Winged Shepherd. It might be a little bit worse, but that doesn’t matter—it’s a 6-drop you don’t want too many copies of. You can pick up the Amonkhet one to upgrade, but unless that pick is absolutely free, you won’t want to waste actually adding a card to your deck.

Unsummon, on the other hand, is definitely better than Winds of Rebuke. Costing 1 mana is an upside over being able to bounce a nonland permanent and mill. If Winds of Rebuke didn’t mill both players it would be debatable. If your deck has a ton of cards that play with your graveyard, sure, it might be better. Otherwise, Unsummon is an upgrade.

With that said, I’m going back to my usual nonstop drafting, and I will see you in Kyoto or at the Pro Tour. Happy drafting!