Sometimes, WotC releases a card that is obviously going to change the metagame. It does something so different and powerful that you know it will spawn new decks, and force old decks to adapt. Cards like the Eldrazi, Emrakul, and Become Immense all forced us to reevaluate the way we think about a format.

Usually those cards are very splashy, but on some rare occasions, they are not. Fatal Push is one of those occasions.

At first glance, it’s just another good removal spell—a better Tragic Slip—but if you analyze it more closely, you’ll see that it has the potential to reshape Modern as we know it, because it offers black something it hasn’t ever had: a good 1-mana removal spell. In the entire history of Magic, black has never had a premium 1-mana removal spell. 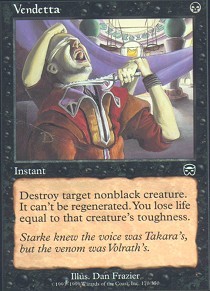 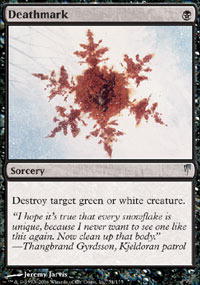 Sure, we’ve had some decent options in black. Disfigure and Vendetta come to mind, as well as Deathmark in the sideboard. But those were never cards you wanted to play, they were the cards you played if you couldn’t afford to splash anything. The really good ones—Swords, Path, and Bolt—were all in other colors. Jund and Abzan exist as decks in large part because of this void in 1-mana removal from both black and green.

Fatal Push entirely changes this. You no longer need to play red or white in your black decks—you can just play black. Or blue! Even if you do play red or white, Fatal Push is often an upgrade to what you already had, since it’s the only removal spell that can easily kill both a turn-1 Noble Hierarch or Glistener Elf and a turn-6 Tarmogoyf or Death’s Shadow.

For those reasons, I think Fatal Push will have its biggest impact in Modern, where fetchlands make triggering revolt almost trivial (note that it says “permanent,” not creature) and enable many different color combinations.

Here’s what this card can kill, for 1 mana, at instant speed:

That’s a lot of “any creature”—this card is almost a Terminate. Most of those can even be killed without the revolt trigger, but if you do need it, you can just sacrifice a fetchland.

That’s basically it. A much smaller list, and mostly creatures that wouldn’t die to Bolt anyway. Path would kill most of those, but Path has a very big downside, and Fatal Push has none.

The possibilities for Fatal Push are endless. You can play it in Jund/Abzan-style decks, or go the Grixis route and play Ancestral Vision, more counterspells, and Cryptic Commands. You can play Esper, or even U/B or B/G. You can even play Faeries!

This is my attempt at a “Sultai Jund” deck, with ‘Goyf, discard, and Snapcaster Mages:

Besides being great in Modern, this card would also be quite good in other formats. It seems very nice in Legacy, where it kills anything from Death and Taxes, any Elf, Delver, Pyromancer, Tarmogoyf, Stoneforge Mystic, and any hate bear if you’re a combo deck looking for removal.

It’ll also, of course, be played in Standard. The difference is that in Standard it won’t change much because the best removal spell (Grasp) was already black. As a result, this is going to improve on existing archetypes since it’s a good card, but it won’t really revolutionize the metagame because it doesn’t open up many new color combinations. It’s much harder to turn revolt on in Standard since something has to actually leave the battlefield for it to work (or you can use Evolving Wilds), but even if you’re just killing something small there will still be plenty of targets, like Smuggler’s Copter, Grim Flayer, Veteran Motorist, Selfless Spirit, Inventor’s Apprentice, Toolcraft Exemplar, and Servant of the Conduit. Once you manage to turn revolt on, it also kills Spell Queller, Tireless Tracker, Mindwrack Demon, Thalia, and Kalitas.

Fatal Push is not the catch-all answer in Standard that it is in other formats, but it doesn’t have to be—it costs 1 mana! If it’s not killing something, it’s because they invested 5 or more mana in it, and that’s fine—Fatal Push is an early-game answer, not a Vindicate. It is at least an improvement over Dead Weight. If anything, being instant speed is already huge, as it gives you the option of killing their turn-2 play on the draw without significantly handicapping yourself. You can turn-1 Fatal Push their Grim Flayer, then play your own on turn 2.

Overall, this card is a game changer. It’s good in every format (it wouldn’t shock me if this saw Vintage play) and it gives black something it has been lacking for about 2 decades, elevating it into a much more self-sufficient color and broadening the possible color combinations, particularly in Modern. I expect we’ll see a lot of this card in the coming years.