I had an interesting thing happen this week that got me thinking about MTG culture and language. Yesterday, my fantastic editor Andy Cooperfauss messaged me with a potential problem regarding one of my videos. Apparently, the video had been flagged by YouTube as potentially inappropriate/controversial subject matter.

I was shocked. My first thought was that maybe I had misclicked and accidentally uttered some profanity without realizing it. I rewatched the video and was relieved to find that wasn’t the case. 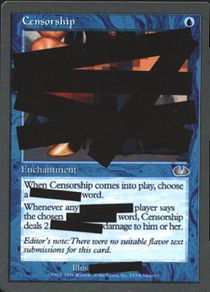 I did say, “Sunscourge Champion was kind of a crappy Kitchen Finks” …is that offensive?

I mean, there was a turn where I played the wrong land and it cost me the game, so maybe YouTube found my actual lines of play objectionable.

I also said, “If I don’t draw a land next turn I’m kind of screwed…” to which Andy replied: “It would be kind of hard to ban the word ‘screwed’ from Magic content…” I thought that was pretty funny. 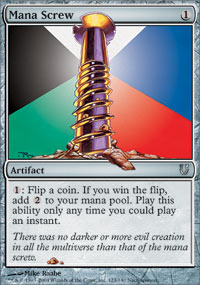 “Mana screw” is such an ingrained part of the MTG lexicon that it is easy to overlook that it might sound strange to a non-Magic player to hear that language. The whole experience got me thinking about why my video might have gotten it flagged. What was potentially offensive?

One thing I did notice was that I said “kill,” and talked about killing a lot.

“I’m going to go ahead and kill this Longtusk Cub.”

Perhaps the amount of time I spent talking about killing, destroying, or blowing things up triggered the flag. For the amount of carnage I was narrating, maybe the voice recognition software thought my subject matter was darker and more dangerous than narrating a card game.

The situation got me thinking about the various ways language and behavior of MTG culture might look to somebody who was unfamiliar with the nuances of gaming.

Hate speech is a good place to start because it isn’t acceptable anywhere. The majority of people (gamers and non-gamers alike) disapprove of hateful language when they hear it. I also believe that human beings will one day conquer racism and sexism, and render those concepts ancient and outdated relics.

I understand the world is not there yet and that some people say and do awful things. The events in Charlottesville last week were disturbing and tragic, and are a reminder that we’ve got more work to do.

Three Things that Need to be Removed From Gaming Language

Although the usage of “rape” to describe a particularly one-sided gaming experience has diminished over the past few years, I still hear it more than the acceptable 0% of the time. Comparing a bad beat in Magic to an act of sexual violence is horrendously insensitive.

There is a specific moment in my life when I learned something that changed the way I felt about certain kinds of slang and jokes. One night I was waiting to pick a friend up downtown in the middle of winter. I was sitting in my car listening to the radio and I heard a tap on my passenger-side window. I rolled the window down and there was a young woman standing there in tears. “Can you drive me to the hospital? I just got raped.” Her voice dropped out on the last word and she started to sob. She was soaked and shivering. I drove her to the hospital and waited with her until she went back with a doctor.

A little empathy for others goes a long way. Nobody wants to hear this kind of talk and it needs to go away completely.

Let’s add telling people to “go kill themselves” to the list of things that are not funny and have no place in gaming. I’ve known people who took their own lives, and there is nothing humorous about it.

I understand that people get tilted and upset about losing at games. People have tempers. But there has to be a more productive and appropriate way to channel that frustration.

I’ll admit that this is much more of an online problem than a real life one. When I play on MTGO, I close the chat before the match begins because I don’t want to deal with these kinds of comments.

There is  no reason why it is acceptable for players to harass other players in the chat log. It has sort of become a tolerated cost of playing online, but it shouldn’t be that way. It is just bullying, and I’d really like to see WotC crack down harder on people who make these kinds of verbal assaults in MTG online venues, and issue bans, online and extending into IRL tournament play, for this kind of behavior.

There is a lot of Magic and gaming slang rooted in making light of various illnesses that also needs to be weeded out.

“This hand is cancer/AIDS.” To mean that it is bad.

The same logic applies here as #1. Comparing a hand that needs to be mulliganed to a disease that will literally eat away at you until you die is not the same thing. It’s disrespectful to people who have to actually deal with such tragedy to compare their plight to a bad hand of cards.

I don’t know why this has caught on so much in gaming culture, but I’m ready for it to pass.

A Place Where Everyone Can Have Fun

Here’s a friendly guide for new players who might be thinking about getting into Magic:

If a hand is bad, “it has AIDS.”
If the game wasn’t close, “it was rape.”
And after somebody loses, “their opponent is garbage and should kill themselves.”

The worst part about these kinds of behaviors is that they make gaming an experience that is difficult for people to embrace. In order to embrace and love playing Magic, attend tournaments, play at the LGS, or travel to a large tournament, you have to tolerate or put up with all of this other awful, insensitive nonsense. It’s off-putting, and no doubt chases lots of would-be MTG enthusiasts away because it creates a space where people feel uncomfortable.

While I’d like to believe that gaming culture can and will become accessible to everybody, it has some insular tendencies that create obstacles. It’s hard to see some of these things when you are surrounded by and entrenched in it.

I mean, I didn’t realize how much I was talking about killing things in my video… I’d never really stopped to think about it until I had to sit down and figure out why my video would be flagged.

We all participate in a culture built around Magic: the Gathering, the greatest game of all time, and that culture should be open and fun for everybody. Anybody who enjoys a good thinker’s game should feel welcome to join and try it out, and not be made uncomfortable.

If you sometimes say these kinds of things because it’s the slang and other people are saying it, I hope that reading this will cause you to question those words, and how they might make others feel.