Sideboarding is perhaps the most underrated art in Magic—over half our games are sideboarded, yet we collectively dedicate a very small amount of time to it. If you analyze a testing schedule, however, that makes sense, unless you settle on a deck early—there’s simply not enough time and manpower to dedicate as much to sideboarded games as there is to preboarded games.

My goal with this article is to maximize the time you do have for sideboard testing by providing some tips and key ideas that you can incorporate into any deck you play. The article following this one will focus on the major sideboarding points for the macro archetypes. The idea here is that if you have enough basic concepts, you can still construct a sideboard from scratch if you decide on your deck the day before the tournament.

1) Identify the key areas you need to improve, but be careful to board against their sideboard, not their main deck.

Most of the time, I believe you can extrapolate how game 2 is going to go based on how game 1 went, and then plan to fix that. If you realize that you’re losing game 1 because your opponent has too many early creatures, then it’s usually safe to assume that this is the problem you have to fix for game 2, and adding cheap removal or creatures of your own should do the trick. This is the main reason why testing preboarded games is still very useful for post-boarded games—it gives you a problem to fix.

You must be aware, however, that your opponent, much like you, is also sideboarding. It’s rare for sideboarding to completely change the identity of the deck, but it’s possible, and you must take this into account—it’s pointless to sideboard in a bunch of cheap removal if your opponent’s plan in game 2 is to morph into a control deck. This is the one part where playtesting sideboarded games really pays off—it allows you to see a difference if it does exist.

One of the games that taught me the most about sideboarding was the finals of PT Charleston, which was Team Block Constructed. I was up a game against Tomoharo Saito, with a B/W deck against his R/B/W Burn deck—a very good matchup for me. For game 2, I boarded in some more removal and took out some of my discard, which in theory would make the matchup even better. What ended up happening, however, was that Saito took out all of his creatures! In game 2 and 3, his deck was basically all burn spells and creatures I couldn’t kill, such as Giant Solifuge. I ended up losing to burn with a lot of removal spells in my hand. Because I sideboarded against his main deck and not against his sideboard, I lost the finals of the Pro Tour.

2) Sideboard based on how your opponents play or what they’ve seen.

Each opponent is different, and their playstyles should dictate your sideboarding. If they are very conservative, trying to play around everything, you might want to take out a counterspell that they saw game 1. This is particularly effective with cards that are either bad or blowouts, such as Runeboggle, Confirm Suspicions, and Give No Ground, because they are quite bad if your opponent plays around them, but if they are prone to do that and have seen the card then you can side them out and get the same benefit while at the same time not having the card in your deck.

Another instance in which this is relevant is when you want to board in Blood Moon versus B/G/x decks. When I played Twin, I would often observe how my opponent would fetch in game 2, and then either side in or out Blood Moon depending on what they did—if they constantly fetched for basics early on, then I wouldn’t have Blood Moon in my deck for game 3 because the fear of the card is already constraining them enough. If they never searched for basics, then I’d have the card for game 3 for the potential blowout.

3) Change your sideboarding based on whether you’re on the play or on the draw.

At Worlds earlier this year, I played a match in Modern against Brad Nelson. I was playing Abzan and he was playing Jund with multiple Liliana, the Last Hope. On the play, I kept my Noble Hierarchs in because I thought I’d be able to establish enough of a board that I would perhaps attack and kill Liliana if he played that turn 3, and because I thought the potential to play a turn-3 Gideon was very valuable. At that point, I wouldn’t care if he cast Liliana. On the draw, though, I thought the board would be clear enough that he’d just be able to Liliana those away with impunity, and he’d cast that before I cast Gideon, so I took all of them out for more 1-mana discard spells, which also gave me a way to interact with his multiple 2-drops when I was on the draw.

4) Don’t forget to sideboard in Limited.

Sideboarding is a key part of Constructed, but it’s also important in Limited. A lot of the time there’s something you can do with your deck, but you don’t even look. In my case, I often have to force myself to do it because I’m very lazy and don’t want to swap sleeves (yeah, I know). 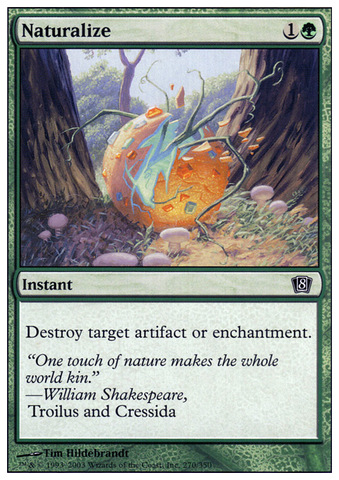 Most of the sideboarding in Limited happens in two ways: They have a great number of cards that you can answer with one card (such as a Naturalize), or you need to change your curve. For Naturalize-type cards, I usually lean more toward quantity than quality. I’m much more likely to bring in Naturalize if they have a bunch of reasonable targets for it than if they have one super bomb and nothing else. In the ideal scenario, they have a super bomb but also a lot of bonus targets if they do not draw it.

The second is one that most people don’t do, but they should. I like picking up random 2-drops and random 6-drops for my Limited sideboards because I think a lot can be gained by making your deck slightly faster or slightly slower. If you’re a slow deck and you get pressured hard by an aggro deck, bring in that Curio Vendor—sure, it’s not a great card, but it’ll trade with their 2-drop, and the point here is that you already win the late game anyway so you can afford a bad card. If you’re a grindy deck versus another slow deck, consider bringing in a Cowl Prowler—the game will likely go late and be defined by powerful cards rather than curve.

Another thing you should always keep in mind when playing Limited, particularly Sealed, is the potential to switch to a different color, or perhaps to splash a color for game 2. Imagine a scenario where you have 3 Doom Blades in your Sealed deck, and then you get paired against a nearly mono-black opponent. Most people in this spot would side the Doom Blades out, but very few people would remove black altogether for a different color, which is something you should consider. After all, it’s likely that those Doom Blades were a big draw to the color black, and if they are not effective, then it’s possible you can do better with a different combination. It doesn’t even have to be as drastic as this. If you have a couple of early removal as a draw toward a color, for example, and your opponent is playing a glacial deck, then you might want to consider switching colors to something that is better equipped to dealing with their threats (for example, swapping your 2 Die Youngs for 2 Malfunctions).

First, are you diluting your deck too much by sideboarding? Those cards are in your deck for a reason, and sometimes you need to keep a semblance of a ratio between threats and answers, or enablers and payoffs. It’s easy to look at a Bogles deck and think “oh, just cut some Auras—I have so many of them,” or to look at Affinity and think “oh, I’ll just cut some Memnites or other irrelevant artifacts,” but those cards are part of what makes your deck work, and if you have to cut them to add something, there’s a chance you’re just making your deck worse.

Second, are you getting too little from your sideboard? Sometimes you improve a certain card, but not enough that it’s worth spending a sideboard slot on. A card like Negate is certainly better than Mana Leak if your opponent is playing all spells, but if your sideboard plan includes swapping Leaks for Negates, then it’s likely that those slots would be better served by dealing with another matchup because the improvement from Leak to Negate is small. If you find yourself taking out removal for removal, or a 2-drop for a similar 2-drop, then those are signs that you should probably rethink your sideboarding strategy.

Most people treat lands as sacred objects that can never be removed—to cut lands is usually considered “noobish”—but it makes sense to do it when you’re drastically lowering your curve or when the matchup is not about speed, especially if you’re on the draw. In general, Magic decks run more lands than they need because it’s too punishing to skip land drops early on, but if you’re in a scenario where the game is mostly an attrition war and answers are cheaper than threats, it makes sense that you would want to minimize the chance of flooding out by cutting a land or even two. If your R/W deck is playing 24 lands to support 2 Consul Flagship and 3 Fleetwheel Cruisers and you somehow end up taking out all of those 5 for sideboarding, there’s no reason for you to not take out a land as well as you’re very unlikely to need it.

7) Hide the number of cards you sideboard.

This is a minor detail, and it applies to some situations more than others, but sometimes it’s good to disguise the number of cards you’re boarding. In Limited, I’ll often have a couple of basic lands in my sideboard and I’ll swap 2 Forests for 2 Forests, because if I do nothing, then they know that everything that was

my deck in game 1 is going to be there in game 2, and nothing new is going to come in. If they see me boarding out one card, they might not play around something they saw because they think I boarded it out, or they might play around a Naturalize effect that perhaps I brought in.

In Constructed, it’s usually enough to just not be obvious about it—don’t lay down the cards one by one. Put them all in your deck at the same time and then remove the number at the same time. You can also just shuffle your sideboard in and pull back 15, but that takes a long time and can lead to you forgetting a bad card in your deck, so I only recommend it if you have a transformational sideboard.

That’s what I have for today! In my next article, I’ll go over the Magic macro archetypes and the generic sideboard plans for each of them.