Modern is known as the format where anyone can play whatever they like and still do well. I like to think that this is true, but in a competitive setting, I can’t stop myself from warning you that the following decks will drag down your chances.

I’ll probably lose Jon Finkel’s respect after writing this, but he must understand that not everyone can do well with ham sandwiches like he does. 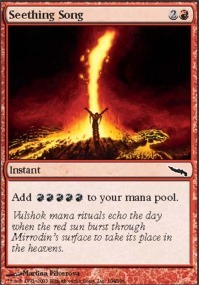 After losing Preordain and Ponder, then Seething Song, Storm never got better. It produced merely good results, and it was brought back when people tried to level metagames that cut down on Storm hate such as Ethersworn Canonist, Rule of Law, and Eidolon of Rhetoric. Unfortunately, there are a ton of other hate cards that people play that incidentally are great against you.

Grafdigger’s Cage and Relic of Progenitus both turn off Past in Flames, which is your primary plan, not to mention every other graveyard hate card being played right now because of Dredge (Rest in Peace, Ravenous Trap, etc). Then Engineered Explosives deals with the Empty the Warrens plan while killing Pyromancer Ascension and Goblin Electromancer in a pinch.

There are a ton of other cards that are annoying: Abrupt Decay, counterspells, and discard spells. Of course, that’s true for most combo decks, but the problem with Storm is that it’s not even that fast. You can’t capitalize on the fact that you’ll catch people off-guard game 1 and hope to dodge hate post-board. The speediness of the format might just kill you game 1, and then you have to deal with sideboard cards.

Every time I’m thinking about bringing back Storm from my dusty closet, as I’m reaching to open the door, I can think of a million reasons to stop doing what I’m doing. So should you.

The closest thing you have to Storm, if you want to play something similar, is Ad Nauseam or Death’s Shadow Zoo.

Before Bring to Light was printed, I was a huge Scapeshift Control aficionado, but as the format evolved, decks became faster and faster—and more importantly, a lot more consistent than Scapeshift.

Its mana base required a million shock lands and Valakuts, which was always a problem you could get around in a slower and more midrange format. But just isn’t the case anymore now that the environment has become so aggro/combo focused.

When the converge spell came to light, I thought it would give the deck a little more consistency, allowing you to essentially have more copies of Scapeshift and spend less time digging for it. The reality is that your mana base is even worse—not by much, but just enough to be too slow and clunky for the format.

I was testing this deck for Pro Tour Oath of the Gatewatch before I knew Eldrazi Aggro was a thing, and what made me drop Scapeshift entirely was the atrocious matchup it had against Tron, a matchup that used to be fantastic. Ulamog, the Ceaseless Hunger turned the matchup around completely.

But there is still a way to play Scapeshift:

Dropping the blue was the first step in becoming a real contender in this relentlessly quick format. Remand and Cryptic Command just don’t do what more ramp and a better mana base can accomplish.

Bogles, unlike Storm, actually gets out of the dusty closet. Then I play 3 matches with it and I say, “yep, never again.”

The reasons it’s not good anymore are similar to Blue Scapeshift—it is too clunky and slow. It can be very good if it has a great draw, if the matchup is not too unfavorable, and if your opponent doesn’t have a nut draw. That’s a lot of “ifs.”

Also, the deck has too many slots that are up in the air. The Path to Exiles are kind of necessary, but make really awkward starting hands. Drawing too many Umbras without a Daybreak Coronet or Ethereal Armor is awful.

I don’t see Bogles being good again until we see another Aura-themed set. It needs a functional reprint of Ethereal Armor or a Faith Unbroken-like card that costs 2.

Every time Modern is infested with Jund, Abzan, and Affinity, I want to bring back B/W Tokens.

On paper, Tokens should destroy these decks. All the token spells create card advantage and you blank their removal spells, and against Affinity you get a bunch of 1/1 flyers, which is generally unbelievable against them.

Most of the above is true. You’ll lose sometimes when they curve discard spells on your Spectral Processions into Tarmogoyfs and you never drawing Lingering Souls.

The real problem lies in the fact that the metagame is never really just these 3 decks. There will always be a ton of different other decks: combos of all kinds, Tron, Lantern, Burn, and Merfolk, which are all bad matchups.

I always give up on the idea of playing it because it plays way too fair. Unlike Jund or Abzan, it doesn’t pack that much disruption, and needs to assemble tokens and anthems to create a reasonable clock.