When I wrote my mini-spoiler spotlight on three planeswalkers I thought had the power level to see play, I honestly didn’t think I’d be right on all three. Narset is arguably the best planeswalker in the set, Tibalt has become a mono-red staple in Standard and not just BO1, and Dovin is seeing play in U/W/x Superfriends decks. Besides these, Vivien and Teferi are also staples, and this uptick in playables shows how much the format is shifting toward strong 3-mana planeswalkers as anchors.

What this also means is that you want a deck that can either interact with these early engines profitably or ignore them entirely. With that in mind, here are the three decks I’d consider this weekend:

As much as people keep talking about all these cool slow decks, I just remind myself that they probably aren’t playing that much Mono-Red in their Mythic streaks. When I stop by the more popular streams, this is usually confirmed. People just aren’t playing all that much Nexus and Red toward the top end of the ladder. Not that it doesn’t exist, mind you, but you see significantly more of it on the way up. It’s surprising, because when people do play the red deck they tend to perform pretty well with it.

I would feel perfectly comfortable playing a red deck this weekend, and I would recommend it to anyone battling. Not only is it one of the most consistent decks in the format, it’s one of the only decks with free wins, which almost no other deck has right now. While I love playing decks like Bant Midrange and various Temur atrocities, they really have to work for their wins.

I’ve already covered this deck in my last article and nothing of note has changed. Play Tibalt and be careful how many Experimental Frenzy you want to jam now that Esper Midrange is picking up traction. Mortify stock is going up again.

One of the easier ways to improve the current Bant deck is to cut down on playing Vivien 3, Knight of Autumn, and maybe even Deputy of Detention game 1 (or at all). These aren’t awful cards, but they are situational and outright bad in multiples.

I liked Vivi3n for a while, but as the metagame has slid toward a weird mix of Red and Superfriends, I’m less happy to see it. Additionally, in midrange games I just really wished it was Oketra, which made me consider why I wasn’t playing more of those. Having a playset of Teferi already helps fill that planeswalker role. 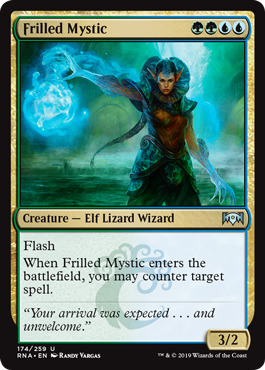 Frilled Mystic is great as a surprise playset, but once it’s known, the threat is often more effective than the card itself. On the play, it’s very good in the midrange wars and against planeswalkers, where you can throw them off curve and gain another body on board. On the draw it usually leaves you in the unenviable position of holding up mana and making it very obvious, only committing a 3/2 to the board if your opponent can hold their nerve. If you’re snowballing, Mystic is excellent. At neutral it’s pretty solid. From even slightly behind it plays out badly if your opponent knows what is going on.

The other major issue facing the deck is that your mana dorks getting picked off early often leaves you with a handful of serious threats that only start to hit the board on turn 5. This means any stumble or quick answer leaves you in a miserable position. I tried to solve this issue by upping the land count and going with a bigger build while switching over to Arboreal Grazer. But note that Llanowar Elves is generally great or at least passable when you mulligan while Grazer is typically an extra mulligan. Obviously against Red it’s a boon, but I’m not sure that’s enough to justify it. For anyone looking for a bigger Bant Midrange, this was the result:

This build doesn’t fully solve the air part of the equation, but it does buff up your endgame threats and gets you to the midgame with the most consistency. Running three Oketra is a lot like running three The Scarab God. You can do it and it’ll still be good, but you should just suck it up and run all four because the minor drawback of drawing multiples doesn’t compare to seeing one every game you can. Post-board, you have the ability to shave all the mana dorks and play a longer game.

For those sticking with a normal Bant Midrange build, this was the last version I had tweaked and was still having success with.

Originally I had tried Teferi, Hero of Dominaria in here as my secondary planeswalker, but over time I felt the way I did playing non-JTMS planeswalkers in Caw-Blade. Drawing cards was nice and all, but instead of risking hitting a land pocket or another Llanowar Elves, what if I just ran cards that actually won the game themselves? Nissa provides a mana boost for Krasis and Shalai while generating threats each turn. Nissa’s ultimate isn’t exactly the endgame you want to see, but if you have any creaturelands lying around it’ll get the job done. Typically just the flood of 3/3s will be enough.

Why play Bant Midrange over other options? Besides Mono-Red, this is the best snowball deck I’ve seen in the format and certain draws on the play are very hard for fair decks to beat. You no longer auto-lose to Nexus decks because of Teferi, Veto, and enchantment removal. You can even bring in Narset to find more countermagic and turn Insight into a liability (though we’re starting to see people respect that angle a lot more). Esper Midrange is the deck people love to bring up now and while I think it’s quite solid, I also think Growth-Chamber Guardian beats them down for free if they don’t kill it immediately. None of their creatures interact profitably with a Guardian chain and Shalai/Oketra demand answers or they’ll often run away with the game. You can also bring in your good friend Carnage Tyrant (over Ugin) out of the sideboard if you really want to remind them that green has a few good cards still.

Standard is moving toward a space where spells and planeswalkers are overtaking the creatures and we’re seeing less of an emphasis placed on them. But I think Bant got enough upgrades and the core lines up well enough that it can carve out a niche for itself by winning against stuff like Esper Midrange while not being a massive dog elsewhere. Since Bant typically does best early in the format and then ends up only being good for memes later, we’ll see if this version breaks the streak.

You know what I enjoy playing against with Mono-Blue? Other blue decks. It turns out when you’re the one who gets to run four Spell Pierce that you often come out ahead. But it should be said that this isn’t just a deck you can pick up and jam into any metagame anymore. You have to really scout out a spot where it can work, partly because of the Mono-Red menace, and because it’s still soft to heavier creature decks and people’s removal suites haven’t adopted to the new planeswalker dynamic. Once that happens it’ll be a lot easier to slide your Curious Obsessions under the radar.

Not a whole lot has changed in the main deck. Callous Dismissal is no Unsummon but it generates a 1/1, which is a big deal against Red where every creature you can stick matters. Something under-explored for this deck since War of the Spark released is how you no longer have to 100% rely on Tempest Djinn or a runaway Curious Obsession to beat decks trying to 1-for-1 you over and over, and then stick a planeswalker to close it out. 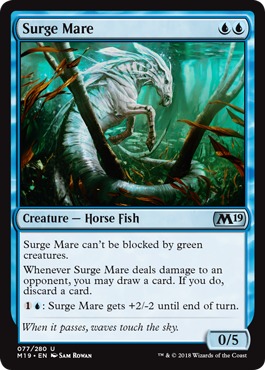 Post-board you can lean heavily into Narset/Saheeli and swap out your worst cards. You can also utilize Saheeli as a recurring blocker generator against red decks alongside Surge Mare where you want to establish early trades without being vulnerable to cheap burn. Saheeli accomplishes this and is also difficult to take down without a large Runaway Steam-Kin on the other side.

This is by far the most ambitious of the decks because it has very clear strengths and weaknesses, and it may be doing a worse job than other decks in an open field. But if you expect a format to be largely sliding toward planeswalker midrange/control with only red representing aggro, then this is worth checking out.

Regardless of what you decide on, I want to reiterate one of the key sticking points of deck selection for Standard. You want a deck that can either interact profitably with 3-mana planeswalkers or ignore them entirely with an overwhelming late game (see something like Ral Explosion combo or U/G Mass Manipulation Ramp).