I won’t lie. When I saw that Arcum’s Astrolabe was banned in the totally-not-an-emergency-because-we-just-rescheduled-it announcement on October 21st, I was pleasantly surprised. I have written about why I felt the card was problematic before, as has my colleague Brian DeMars. The short version is that Arcum’s Astrolabe changed the way mana worked in Pauper, taking away color requirements while also being part of a powerful card advantage engine with Kor Skyfisher.

Why Arcum’s Astrolabe was Banned

According to the announcement, Astrolabe decks were consistently at the top of the metagame while also sporting a win rate of about 55%. Astrolabe gave decks access to fantastic mana fixing, which turn allowed them to run the best answers. Look at the deck above–it leans heavily on white cards like Kor Skyfisher and Ephemerate to grind out victories, but runs only two lands that can produce white mana. 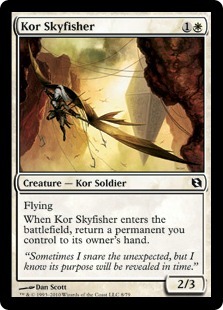 Tron decks also take a hit with this change. Tron builds had taken to biasing towards Snow-Covered Islands in order to run Astrolabe as a way to see more cards and fix their mana. Now without Astrolabe they will need to turn back to Prophetic Prism and lands like Shimmering Grotto for supplemental fixing, slowing down Tron decks in that they will have further restrictions on what colors of mana they can produce on turns one and two. While the archetype likely sticks around at a high level, it definitely loses a step.

Pauper After the Astrolabe Ban

So where does this leave Pauper moving forward? With Ephemerate still legal, I fully expect Mulldrifter decks to survive, but they are going to have to make concessions to their mana base moving forward and may have to abandon red in order to support an Archaeomancer game plan. It is possible that the archetype can no longer keep up with the metagame and people will have to content themselves with looping Ghostly Flicker through Archaeomancer and Chittering Rats.

Arcum’s Astrolabe being gone opens up the door for the Monarch mechanic to return. While it never really went away, Boros Monarch took a backseat to Jeskai in part because a free draw on your end step was simply worse than using Ephemerate to draw the best card out of your graveyard every turn. Boros Monarch might lose out on Arcum’s Astrolabe, but that hardly matters as it can slot Alchemist’s Vial back into the deck and barely change gameplans. If you want to go into the queues day one and try to grind people into dust, Boros Monarch is a good place to start.

If you asked me what the best deck is this week, I’d say Stompy. Already a premier aggressive strategy, it loses absolutely nothing in the bans. It can apply a ton of pressure and has gained an interactive element in Savage Swipe so that it can go toe-to-toe with Palace Sentinels. More than that, if Tron does take a step back, that means there are fewer copies of Moment’s Peace and Stonehorn Dignitary running around.

Now that Arcum’s Astrolabe is banned, what deck do you think it best set up to do well in Pauper? Let me know using the tag #mtgpauper.