This past weekend I participated in a Vintage Rotisserie Draft thrown by my friends at Shotgun Lotus in Seattle.

Vintage Rotisserie Draft is an 8-man draft format where you take turns drawing from the whole Vintage card pool—every card ever is fair game. Even Black Lotus, which I got to take with the very first pick!

I know a lot of you guys stick to the WOTC supported formats with the goal of living “the dream” and getting to travel and see the world. This is totally admirable and I encourage you to go after it if that’s your plan.

I also know a lot of you guys just like to play Magic because it’s fun. For those of us who see playing and deckbuilding as the prize itself, why stick to the common formats? Why not do something a little different? Why not try something wild and out there?

That’s the idea at Shotgun Lotus, where they are not only running a ton of these kinds of events but are covering them with live streaming coverage. Shotgun Lotus may or may not be the future of MTG entertainment, but they are definitely opening casual competitive entertainment options for the whole game. Keep your eyes on ‘em.

As the draft approached, the main deck I was working on was UR Faether Vial, and I thought it might be a good option for the Vintage Rotisserie Draft. There are tons of great disruptive and flexible options across blue and red in Vintage and it seems like an aggro/control/combo deck would be a good option.

I talked it over with my brother Elliott, who was saying he wanted to try Mono-Black Storm if he got the first pick of Black Lotus. Black is maybe the deepest single color in Magic history, rivaled by blue, and it seemed like maybe even two players could play Mono-Black successfully.

Going in, I had a massive cost-sorted list of all the most powerful black options in the history of the game. More than play a storm deck, I wanted to try on various black hats: disrupt and combo finish with Vampire Hexmage/Dark Depths, Entomb Griselbrand/Reanimate, Leyline of the Void/Helm of Obedience, or just Dark Ritual out a fast Grave Titan.

The most interesting element of the draft was trying to pick cards right before they got picked. There were times where extremely important cards to my deck looked safe and I went after sideboard options that seemed in danger of being picked. This worked out okay but I ended up missing out on one key card in particular: Yawgmoth’s Will.

Here’s the spreadsheet of picks, in order, starting left and wheeling back and forth:

You can go down my picks in order on the left.

This is the main I played:

And this was my board:

The deck was sweet but a lot of the time it didn’t work, and I finished 3-4. I had so many different combos in there that I would draw the wrong parts and if I didn’t have a tutor I could potentially do nothing. If I had the Demonic Tutor or even something like Beseech the Queen, I think my deck would have been much better.

I also picked and played too many lands, which led to flooding out early and often. All that said, 3-4 was not too bad a record considering the competition. Most of the current best tournament players in Seattle were present at the table.

The tournament experience on the whole was great because we got to play and draft in a garage with the door open for some air. I wasn’t required to sit in a chair for the draft so I got to set up camp on the ground and pace around as much as I want. A casual atmosphere like this can make all the difference in tournament enjoyment.

While I coughed up a mediocre 3-4 record, Elliott went on a 7-2 tear taking down our longtime friend/teammate Jesse Hampton in the finals.

Here is what Elliott had to say of his experience:

“During and after the draft, I thought that I either had by far the best deck or that I totally misunderstood the format. Despite my win, I’m still not sure. I thought my deck was great and would happily run it back given the draft conditions, but I can see how many people might remain unconvinced that attacking with four-mana red creatures is actually a good plan in this format. I might have just been the beneficiary of unnecessary infighting among the combo players that prevented their decks from achieving their full potential. Or maybe having the consistency of a “normal” Magic deck really is that good. Who knows?

The draft went great for me. I got the exact card I was targeting in each of the first five rounds (the ones that really counted), and managed to get red entirely to myself. Interestingly, Justin Robinson also went into the drafting intending to play U/R Twin, and he took Mox Sapphire in the fourth seat. I think this was a mistake on his part, and I was extremely happy that Mox Ruby fell to me. There are lots of great cards that can be picked in rounds two and three to signal blue, but Moxy Ruby is the only reasonable card with which to signal red early.

After the first several rounds of drafting, it was obvious that I would be able to get many of the cards I needed late in the draft, so I started grabbing lands very aggressively. This was both because I was concerned about my mana, and because I wanted to keep anyone from getting ideas about moving into red. Being able to pick up key cards late in the draft also seemed to confuse my opponents, and I don’t think people really understood what I was doing until they played me. During the second-place playoff match, Corbett expressed surprise that I was maindecking Hellrider. The Hellrider/Hero of Oxid Ridge/Goblin Rabblemaster package was a core part of what I was doing, but the fact that I drafted them at a time when I and others were mostly drafting random sideboard cards seemed to disguise my true intentions.

During the tournament, I did an interview with Brian Wong, in which he commented that I was playing a “fair” deck. I concurred at the time, but in hindsight I think my deck was actually pretty unfair. I mean, I had a two-card I-win combo where I had redundant pieces for both halves, and half of the cards had flash. That’s not fair at all. I also had access to a turn-two kill, provided I hit both Time Walk and Mox Ruby on turn one. In addition, these combo cards happened to also be generically useful tools that didn’t require much support. Pestermite is an evasive flash creature with a useful interactive ability. Kiki-Jiki is often a kill in combination with any of my big red threats. Only Splinter Twin is an actual pure combo card.

But the reality is that I did win most of my games simply by attacking. I think I cast Splinter Twin less than five times, and I didn’t cast Kiki-Jiki once. So I usually won in ways that could be called “fair.” That said, when we use the word “fair” to talk about Magic, we generally are referring to speed and interactivity—e.g., Caw-Blade was a totally broken and unfair deck, but it wouldn’t usually be referred to as “unfair.” Creatures are generally considered “fair” because they’re so easily interacted with. In this format, however, many of my opponents weren’t playing anything that interacted with my creatures at all. A card like Goblin Rabblemaster becomes pretty unfair when it effectively has hexproof and unblockable—an unchecked Rabblemaster will deal 15 damage by itself in the two turns after being played. That plus literally anything else is enough for a kill. The story is similar with Hellrider and Hero of Oxid Ridge. Those cards need a bit more help, but my deck was constructed to get in some early damage with one- and two-drops and evasive three-drops. Essentially, in the absence of blocking my deck became a collection of redundant two-card combos, in which almost any combination that didn’t instantly win the game would put the opponent on a one-turn clock. The actual effect of playing any of these red creatures wasn’t all that different from Tinkering out a Blightsteel Colossus.

So, I was capable of racing the combo decks. And, of course, I was playing a deck full of creatures, smoothing, and cheap interactive spells, plus the Splinter Twin combo. I was very well positioned to fight any fair decks, as my deck was both resilient and robust.

Getting steam rolled by Elliott’s fast Red Twin deck myself, I got to thinking about applying the deck to Modern.

Goblin Guide and Pestermite… these cards play well together, but why have I never seen it?

Probably because the blue mages outnumber the red mages by so much. There are so many viable blue/red decks in Modern—Twin, Tempo Twin, Rug Twin, UR Delver, UWR, Blue Moon. All of these Snapcaster-Bolt decks piloted by blue mages. 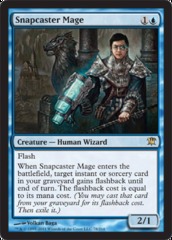 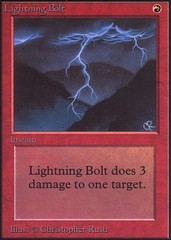 But why not play it as a red mage? Why not think of it as red/blue?

Where the red mages at?

Initial 2-man testing with this deck has been extremely promising. We’ve got an extremely efficient tempo/burn-to-the-face plan A with a tried-and-true combo plan B.

The combo kill is very hard for our opponents to play around because they can’t expect it out of a Goblin Guide-type burn deck. But tap out and they just might be dead! 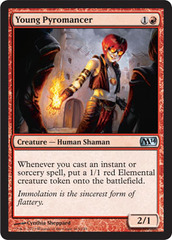 One of the big questions to me is the creature package. Goblin Guide, Grim Lavamancer, Pestermite, and Vendilion Clique seem great but the spell count is definitely too low for Delver of Secrets and might be too low for Young Pyromancer as well.

Our other main options are Eidolon of the Great Revel, Plated Geopede, Goblin Rabblemaster, or maybe even Phantasmal Bear.

For sideboard I’m thinking anything that goes to the face: 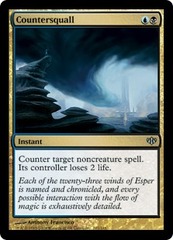 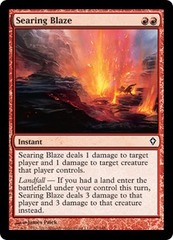 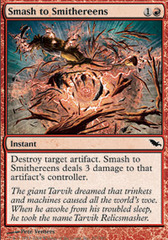 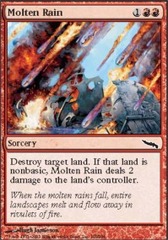 These are classic tempo plays that fit right into our strategy and happen to be abusable with Snapcaster Mage.

I’m also interested in having 1-mana options to choose from while more burn and removal would be nice. 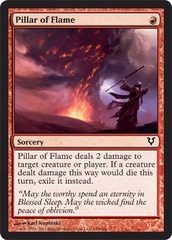 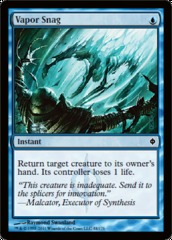 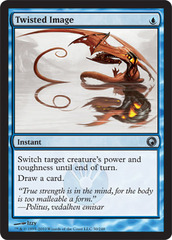 It would also be tempting to bolster our combo kill against opponents who are not going to see it coming: 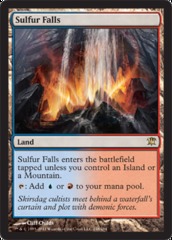 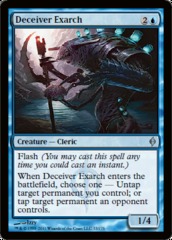 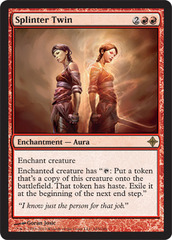 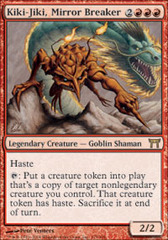 Stay tuned for the video coming next week! 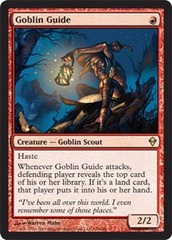 Goblin Guide in blue decks seems like a huge innovation to me. I’m shocked we don’t see more of it in Modern. To me, Goblin Guide is one of the most powerful 1-drops in the format. It singlehandedly makes mono-red burn a viable and competitive deck. The difference in starts between a burn deck with a turn 1 Guide and without is staggering…. so why not play it in the tempo blue decks?

That’s what I want to do. Today it is in a Twin Combo shell, but next week I might be looking at it in a straight Delver shell. We have options!