Another Modern Mythic Championship has come and gone, and the Top 8 looked fairly diverse, being composed of Tron, Hardened Scales, Eldrazi Tron, Urza ThopterSword, Jund, Mono-Red Phoenix and Hogaak. But, if you dig just a little deeper, you’ll find that of the twenty 8-2 and better decks, eleven were Hogaak or Hogaak Dredge. The deck also had one of the highest win rates, even though Leyline of the Void was the most-played card at the MC.

If at any point it becomes correct to maindeck Leyline of the Void, I think we may have a problem. While most of the maindeck Leylines were in Hogaak, I still think it’s illustrative of the big graveyard problem that Modern currently has. More on that later.

Hall of Famer William Jensen had this to say:

I can’t fault him for that, but Hogaak is truly a miserable play experience. The deck operates shockingly well against many forms of graveyard hate (Surgical Extraction, Grafdigger’s Cage), and really requires permanent hate cards like Leyline of the Void or Rest in Peace to slow down. Force of Vigor in the sideboard is also an elegant solution to these problem cards and doubles as an answer to difficult permanents like Ensnaring Bridge. In the end, the deck is just too powerful and Hogaak was unfortunately a major design mistake. Who knew delve was broken? I applaud R&D for stepping outside and taking some risks, but it’s time to fix the format. I don’t think many will shed tears as it’s not fun staring down a huge board consistently on turn 2.

Playing gaak resulted in the least amount of “real magic” I’ve ever played. Very lopsided matches made up of nut draws or my opponents having Leyline. Basically all my games were done turn 2-3 and had very few interesting decisions the entire tournament. Can’t wait for it to go.

99% of people would likely agree that Hogaak, Arisen Necropolis should be banned in Modern. But I would go a couple steps further and just ban Faithless Looting and Allosaurus Rider too. Let’s talk about Allosaurus Rider first. 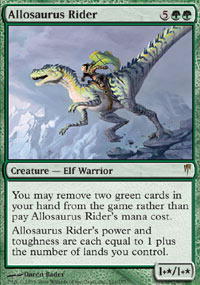 The Neobrand deck is attempting to win on the early turns of the game and dodges most forms of interaction. Force of Negation, Thoughtseize, and Grafdigger’s Cage are about the only reasonable spells you can have to interact on turn 1. According to Neobrand enthusiast final_nub, you win on turn one about 9% of the time and by turn two 30% of the time. This is just way, way too fast for Modern. Even if the deck isn’t extremely competitive, it is powerful enough that a ban is warranted. At the MC, five players decided to sleeve Neobrand up. This was possibly the most important tournament of their lives, and they each chose to play a high-variance deck that had a very high power level. Although their win rate was not great, I believe it can be partially attributed to open decklists. At a recent StarCityGames Open, I saw my teammate killed on turn 1 with a Pithing Needle in his hand on the draw. This is unacceptable as we can’t expect too many decks to run Force of Negation. I don’t fault anybody choosing to sleeve up the deck if it remains legal. But it’s an unfun experience and doesn’t fit with the idea that you should not be able to lose on turn 1 or 2 in most situations. This is the first turn 1 or 2 kill deck that didn’t fold to removal (hello Cheerios / Infect), and I believe that to be a huge problem as you don’t want to blank a huge swath of the format. Even if Neobrand’s win rate remains depressed, the fact that people are showing up at a tournament at all is making the event worse for a lot of the participants. Although I love me some degenerate Griselbrand strategies, this one has gone too far.

In terms of what to ban, Griselbrand may be a problem, but there aren’t enough good ways to cheat it into play and Goryo’s Vengeance has been outclassed by the masses of players playing Surgical Extraction or decks like Humans. Simian Spirit Guide fits into Eldrazi Stompy, Narset Prison, Grishoalbrand and Ad Nauseam. Currently, none of these decks are hugely problematic so I think a Simian Spirit Guide ban would be slightly premature. Neoform and Eldritch Evolution are fine. Being able to turn a 0-mana creature into a Griselbrand is not. So, of the potential ban options, I believe Allosaurus Rider to be the best ban with the fewest negative externalities.

Finally, a few people have used the “pillar of the format” argument for keeping Brainstorm unbanned in Legacy and Bazaar of Baghdad/Mishra’s Workshop unrestricted in Vintage. I don’t like the “pillar of the format” argument and I think Modern is meant to be a more accessible and popular format than Legacy/Vintage. By giving themselves the most tools they have available, Wizards can do a better job at managing degenerate strategies when they get too out of hand. Perhaps one day, Ancient Stirrings or Mox Opal will have to be looked at more closely. For now though, I think Faithless Looting is a much bigger offender and Looting decks are a disproportionately high percentage of the field.

Finally, let’s talk about the elephant in the room, Faithless Looting. It is currently played in Hogaak, Dredge, Izzet Phoenix, Mono-Red Phoenix, Hollow One and Mardu Pyromancer as well as some more fringe decks. With Hogaak gone, Looting remains one of the most powerful pillars of the format. But should it be? It mostly enables degenerate strategies that can easily sidestep normal means of interaction. Thoughtseize and Logic Knot only go so far when a lot of your powerful plays are from the graveyard. Faithless Looting has forced many Modern sideboards to fill up with answers to the graveyard, and it has simply been the status quo for the past couple of years. Now, whether Faithless Looting should be banned really depends on your goals for Modern. If you want to manage things laissez-faire and only ban the most egregious cards, it can make sense to leave Faithless Looting around. But, eventually there will be more “broken” free plays from the graveyard to join Dredge and Arclight Phoenix, and we’ll likely be having this conversation down the line. Before Faithless Looting became a fixture of Modern, there were a variety of Cryptic Command decks that saw decent high-level play. Now those decks can only attack very specific metagames and are often forced to maindeck graveyard hate to interact with Faithless Looting.

There is some downside to banning Faithless Looting, namely collateral damage. Hollow One, Grishoalbrand and Mardu Pyromancer will be severely weakened from the banning, but it’s possible that the Modern format has moved past them already. I believe most of the cards in these shells will still be playable in some form, and who knows, if the graveyard hate decreases, these decks could still put up some results. In a lot of situations, these decks could also be rebuilt to be less reliant on the graveyard and focus on another angle of attack such as Yawgmoth, Thran Physician.

To me, Faithless Looting is very similar to Deathrite Shaman. It just does too much for too little and is format-warping. We can leave it around if we want, but at a certain point it will be wrong not to just pick up and play the most degenerate Faithless Looting strategy of the day. Modern is very close to becoming an insanely diverse format where there will be a plethora of different fair and unfair strategies available. Wizards should take a hard look and see if that format can come sooner rather than later.