With the recent pushback against green and Simic’s dominance in card advantage in the past couple of sets, it’s impossible not to notice how poorly white has performed by comparison. While I’m not here to rehash that particular debate, I am excited for a pair of white cards in Theros Beyond Death that may get white aggro back on the map: Elspeth, Sun’s Nemesis and Eidolon of Obstruction. 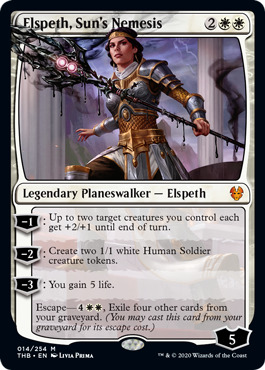 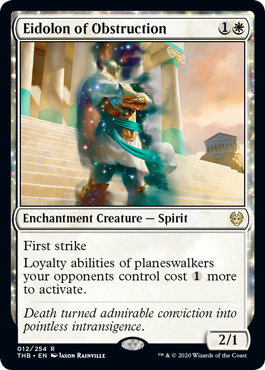 For those who aren’t familiar with the best-of-one metagame, WW has become a niche aggro deck that pops up whenever slightly bigger creatures and life gain can win aggro mirrors. I even had success in the best-of-three metagame until Rakdos Knights got popular again and people started packing more anti-aggro measures. In this case, it turns out Rotting Regisaur and friends are pretty awful against a deck with eight 1-mana tap creatures (four of which are Giant Killer). Against everyone else, you have the classic opener of triple 1-drop into Venerated Loxodon, Unbreakable Formation, or even Heraldic Banner. If not for Jeskai Fires maindecking the full playset of Deafening Clarion and the lack of relevant two-drops in WW, I think the deck may be solidly tier 2 now that the packs of Wicked Wolves have migrated.

There are two big issues plaguing the WW deck, which these cards help solve. One is that your haymaker cards kind of suck if they don’t get you an overwhelming advantage. Often, on the play, if you Unbreakable Formation or Loxodon on turn 3, a Deafening Clarion or even a 2-damage spell like Flame Sweep can still mop up the majority of your board. Loxodon is also significantly worse on the draw as those are the games you need immediate damage. All of these are also generally bad on a (near) empty board.

Elspeth helps solve both of these issues either by presenting a threat for following turns while generating value on the board, or pushing through damage immediately. What’s even better is that, with fliers, this is often more damage than you’d get from any of your other potential options, and the threat of it remains the next turn. Finally, there’s the potential to rebuy Elspeth in longer games against control decks. If they deal with your battlefield, you should be able to pay the escape cost at least once. Between this and Castle Ardenvale, you can easily pull out games that haven’t already been taken over by Hydroid Krasis or Gadwick.

The other big gain here is Eidolon of Obstruction which gives you a reasonable alternative to Tithe Taker or Tomik—the usual compatriots to Raise the Alarm. Neither is particularly appealing in the current metagame with the exception of Tithe Taker against Flash decks and Tomik vs. Nissa. Eidolon of Obstruction not only plays better in combat but shuts off immediate activations from Teferi, Time Raveler, Nissa, and other ‘walkers when played on curve. I use those two as an example as Teferi and Nissa aren’t so much of an issue when you have a chance to establish your game plan, but in games where that’s a struggle, even a turn delay can make the difference.

You’ll note Daxos, Blessed by the Sun isn’t in this particular build, and that’s for the same reason you don’t see Tithe Taker and friends. The deck really just wants to flood the board early and then turn sideways every turn. Daxos doesn’t really benefit that game plan, and the aggro mirrors are won by alpha strikes instead of incremental damage. Typically, if you nullify or survive one of those turns, a card like Daxos would be game winning, but we’re more worried about reaching that point. So instead we lean heavy on the 1-drop plan and the combination of Giant Killer and Law-Rune Enforcer to clear the way and keep us safe from huge creatures.

If we get another solid creature or answer card that can be played in this type of aggressive deck, I’d consider building it with a more typical curve. No matter how it ends up, I imagine Elspeth is going to be your curve-topper every single time. She makes me want to play a 21st land just to cast her on turn 4 a bit more often. While I wish Heliod was a little more helpful (as I envision it, it’ll mostly be good when you’re already crushing), I’m glad to see at least a couple of the white cards are strong enough to be worth a try in Standard.