Heading into Grand Prix Memphis we’ve seen a wide open Standard format, and it’ll be interesting to see if the metagame finally begins to tighten. What I’ve been noticing more and more is that the real world feels like it’s finally starting to reflect the Magic Online grinders. Before, articles and results from the handful of major Standard events and MTGO were night and day. I attribute this to the fact that one side had a whole lot more theorycraft decks that lost to red.

But that was a few weeks ago though. Now, a lot of the information you’ll be seeing is far more relevant. The red menace is starting to be beaten back by better designed midrange and control decks. Meanwhile, other aggro decks are all effectively dead… wait, what’s that G/R Monsters deck playing? It turns out that Earthshaker Khenra is a good Magic card and the explore mechanic plays well with eternalize. We’re starting to see people explore other shells for the more powerful red threats, which right now are the best things to be doing in the format.

This is the first significant aggro deck we’ve seen hold up besides Mono-Red. Mardu fell off a cliff after the first few weeks, much to my own displeasure, and B/R decks have all felt worse than going solo. Resilient Khenra is a cool pickup that really showcases how powerful these types of cards can be even without Anointed Procession. While the deck lacks Hazoret, Rhonas isn’t a bad substitute and can dominate games against slower decks.

Meanwhile, on the other side of the spectrum, U/B Control has finally started to get the respect it deserves. People are finally casting off the bonds of Champion of Wits and The Scarab God, and just exploring what makes the deck good. In this particular metagame, Essence Scatter and Vraska’s Contempt are two of the best angles of attack. Todd Stevens’ version of the deck illustrates what we’ve started to see: U/B Midrange becoming full-on U/B Control, embracing countermagic and Torrential Gearhulk.

I’ve highlighted Todd Stevens’ deck not just because he won the SCG Classic at Indy, but because he did something I considered but ultimately bailed on. He shaved a bunch of Censor, which has often felt like the worst card in the deck. Essence Scatter and Disallow are just far more relevant.

I had already been arguing in discussion groups about my love of Torrential Gearhulk, a card I’ve derided many times in the past for suckering people into playing dumpster control decks. But in a format of mostly creatures and 2-for-1s, Torrential Gearhulk fits right in as a split card that either counters, exiles a creature and gains you 2 life, or a scry 2/draw 2. That sixth toughness shouldn’t be underestimated, allowing you to block practically anything in the format. While Gearhulk may get ganked by Abrade, frankly you don’t care in those matchups.

Having played both sides of the red matchup more than a few times, here’s what I tend to expect my Gearhulk to do. Cast Moment of Craving or Vraska’s Contempt, killing a threat and gaining me some life. If they have the Abrade, great—I still got my money’s worth. If they don’t have the Abrade, typically the red player is banking on drawing a very slim set of cards to be in the game at all. The Scarab God is not going to stop Glorybringer or Phoenix from smashing you to death and you’re too slow to race unless you are at 12+ life and get to reanimate a pair of haste creatures. 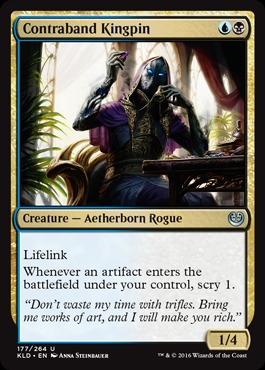 I cannot stress how good Gearhulk into Contempt post-board is. Moment of Craving and Contraband Kingpin pigeonhole the red player into going bigger and that means Rekindling Phoenix, Chandra, Glorybringer, and so on. Your deck is not actually good at dealing with these threats if they resolve, which means that you need to make the most of Contempt if you see it.

Tangent: On that note, a big part of this comes from how ahead the decks online are. Most of them now run some number of main-deck Rekindling Phoenix, and at minimum have 2 in the 75. In the real world you’ll still see lists with 0-1. Run a pair and add more if you like them. It would not surprise me in a couple of weeks if we see builds with quad Phoenix and Glorybringer a la the G/R decks. Hazoret is amazing game 1, but starts to lose effectiveness as you bump your curve post-board.

Gearhulk makes it a lot easier to play around Scavenger Grounds than The Scarab God. Not everyone is going to know the optimal timings for it, and it opens up lines that are a lot harder to stop.

While I still like Tokens, U/B Control is possibly the best deck for the weekend. It’s already been proven against Mono-Red and has a really good subset of answers against any other shenanigans you may run into. Unless you suspect a big push from U/W Eternalize or W/B Tokens, you have a chance against anything if you have Duress/Scatter/Contempt at your disposal. If you are worried about niche cards like Profane Procession, run Metallurgic Summonings in the board.

What I’d recommend for the weekend, assuming you have some reps with the deck:

Possibilities if you’ve played with the deck a lot:

Decks I think are positioned badly—do not try unless you’re a master or have a fresh take on them:

Grand Prix Memphis will be really interesting to see as it will be the first time we see pros throw their hats into the ring and we get the full 15 rounds of Standard.