The last deck in my Top 8 Modern Decks series is certainly not the least—another big mana deck: Scapeshift. I have to say, the 8th choice was really close between UWx Midrange (Restoration Angel, Snapcaster Mage, Celestial Colonnade decks), Storm, Infect, Amulet, Zoo, Merfolk, and Bogles, but ultimately, the tiebreaker was Valakut, the Molten Pinnacle being the one I’m most familiar with.

I won my first PTQ and cashed my first GP with that exact 75. Of course this is Extended, but it has similarities to what we call All-In Scapeshift in Modern.

Now this one is closer to the usual Blue Scapeshift played in Modern. A few counterspells to road-block your opponent until you hit enough lands to Scapeshift for lethal. During this Extended era, we didn’t have access to the Ravnica shock lands and that’s why Masashi ran Prismatic Omen alongside Wargate to fetch them.

Here, you can admire the beauty of a 66-card deck. James found a way to play the necessary amount of Mountains while still being able to jam blue cards in his deck. This kind of variant never really came back in Modern, again thanks to the Ravnica duals. 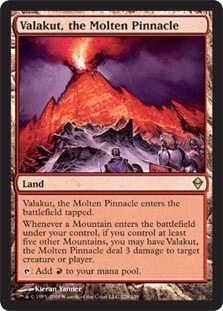 Unfortunately, this card started off on the Modern ban list as soon as it became a format. That left us waiting a year until it was unbanned.

The following deck list was the first to notch a result in a professional event.

The sideboard is a little off, however the rest of the list shaped up to be decidedly conventional.

Just a few months later I ended winning a PTQ with that list, which is slightly different from other lists. Cultivate was a great way to fight Liliana of the Veil. Explore and Serum Visions were just an unusual duo of card filtering that I liked at the time. Prismatic Omen was basically a way to do something other than strictly combo’ing—you could win games by just making land drops with one or two Valakut out, and it also made the actual combo a turn faster by needing 6 lands instead of 7 to lethal them.

LST became not only a Scapeshift specialist, but a Modern specialist, Top 8’ing this Modern Pro Tour and the following two! In this variant, not much changed except that Lee sure liked his card selection with 4 Telling Time, 4 Serum Visions, and even an extra cantrip in Repeal.

It was rarely ever tier 1, managing to get a result here and there and eventually faded away for a while.

Team ChannelFireball sleeved up this more unique take on the deck. It’s essentially the same as what I won a PTQ with—straight-up RG, ramp as fast as possible. It has two blue sources for some counterspells against faster combo decks and that’s it.

This is the closest we got to a Scapeshift deck for over a year. Not only does it not play 4 Scapeshift, it’s also not anywhere close in terms of game plan. This deck was designed to beat an extremely specific metagame—the Treasure Cruise era. Needless to say, it lasted 2 months.

It has recently started to perform again, more specifically in the hands of Matthew (who, on an unrelated note completely destroyed me in a feature match with his 4 sideboard cards while I played Affinity).

I like the Compulsive Researches he added to the list, it has always been a great card, I’m happy it found a home. What I’m even more excited about though is this gift:

That card is awesome, it will be a house in Standard and it’s an exciting addition to Scapeshift decks in Modern. One of the issue has always been that if you don’t ever draw the archetype-defining card, you just plain lose. Now you can play up to 8 Scapeshifts!

Most of the time, it will even be better, since it does something else if you already have the needed combo pieces in hand. With Blood Moon around, it sounds scary to add a 4th color, but I’m sure players will find a way around it.

Thanks for reading my whole series, it was a blast to write and I hope you enjoyed it as much!