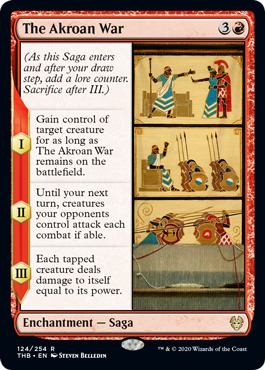 The Akroan War (besides being a flavor win, much like many of the Sagas) is an effective sideboard option in creature-heavy matchups. You get to steal one of their creatures, pummel them with it for a turn, then you get a turn of wide open attacks. At the end, their creatures even punch themselves, making this into a card that provides a lot of action at a reasonable cost. It’s far better when you’re the aggressor, because you can then just let all their creatures through when they are forced to attack, so look for this in aggressive red decks against midrange. 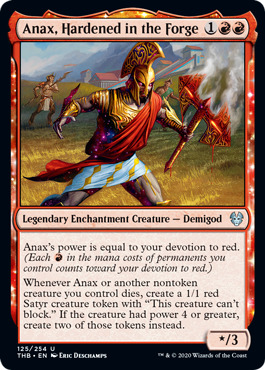 Anax, Hardened in the Forge

Anax offers a powerful engine at a cheap cost. He simultaneously attacks for a lot of damage while also protecting you from sweepers and synergizing nicely with sacrifice effects. This is a very cool build-around, and makes you care about devotion, tokens, and 4+ power all at once, which red decks can work with. Take a look at a deck that recently 5-0’ed a Standard league: 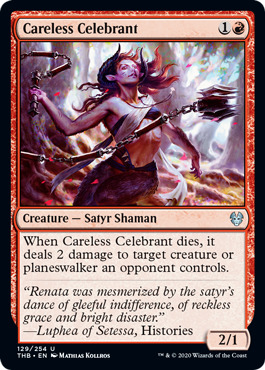 Careless Celebrant is the kind of card that sees fringe play, as it provides a little sacrifice fodder and a Maximize Velocity (that can’t go face) when it dies. It’ll need  some help before it hits. 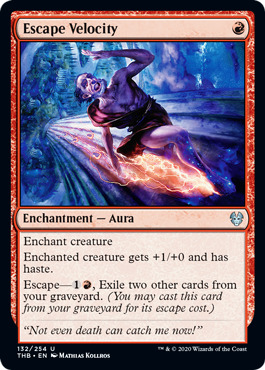 If not for Maximize Velocity, I’d be a bit higher on this. It doesn’t cost a card from hand to cast, which is nice, but two mana instead of one is a big difference. 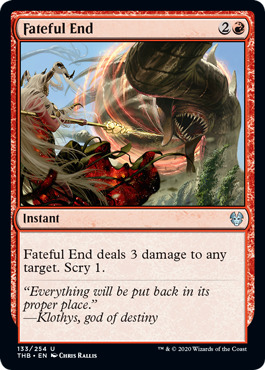 Three mana for three damage is slightly inefficient for Constructed, but tacking on Scry 1 and making it instant speed brings this back around to niche playable. If you are lacking burn spells, this can help fill out your deck, and if you end up playing this, it isn’t the end of the world. 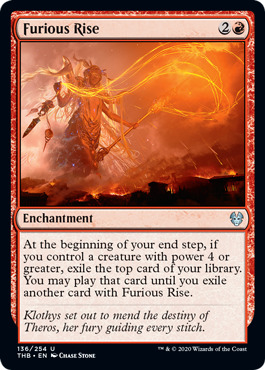 I like the idea of Furious Rise as a sideboard card in attrition-based matchups, especially ones where the opponent has a lot of sorcery-speed removal. You can play a big creature, trigger Rise, then even if they kill the creature on their turn you are up a card. 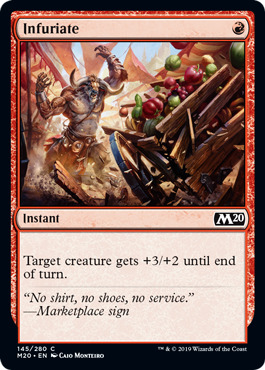 Not going to lie, I would not have pegged Infuriate as a Constructed-playable in most sets, but people seem to be into this one. Red decks just need all the damage they can get, and one mana for three damage is a good ratio. 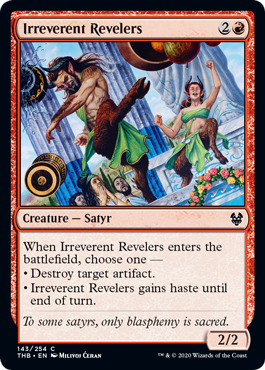 Having more ways to cheaply kill artifacts (and get value) is never a bad thing, and the Revelers will party anytime artifacts get popular enough. 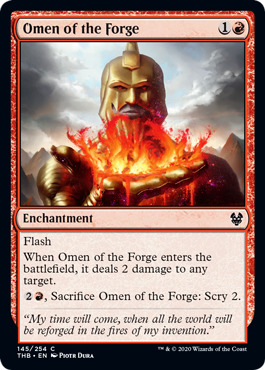 Omen of the Forge

Omens not named “of the Sea” are going to have a rough go of it in Standard. Who knew that Preordain was better than Shock or Raise Dead? 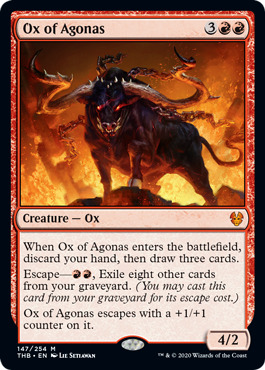 Ox is a real beast of burden. This card offers an extremely powerful incentive to any deck that can rapidly fill its graveyard, and is especially powerful because you never even need to draw the Ox. It can power some sweet janky Standard decks (Arclight Phoenix is still legal, you know), but where the real meat is happens to be Modern Dredge. If you can discard a dredger and mill the Ox, for only two mana you get to play a giant thread and mill a ton more times. This card is an excellent graveyard engine, and will see a lot of play across a variety of formats. 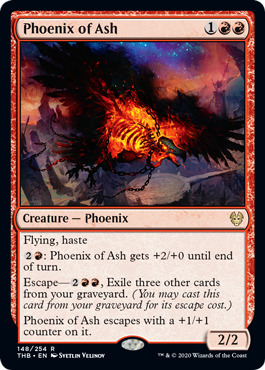 Phoenix of Ash gives aggressive red decks an extremely potent and resilient threat. I love the numbers on this card, as it comes out cheaply, pressures the opponent or their planeswalkers, and if you have excess mana, can deal upwards of 6 damage a turn. When they do deal with it, it often will just come back bigger and better, and its escape cost is quite reasonable. This works perfectly in aggro decks, either main or out of the sideboard, and can even fit into midrange decks nicely. It’s a 1-card army, because it’s capable of finishing a game without much help, so threat-light decks can also side this in against opponents who take out too much removal. 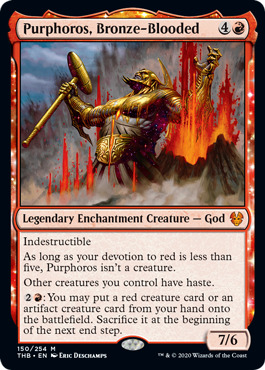 Sneak Attack is an enticing ability, so Purphoros certainly has potential. Drakuseth seems like the best Standard option, though Cavalier of Flame could be interesting too. That also suggests a Fires of Invention/Purphoros mashup, which does a lot of cheating things into play. 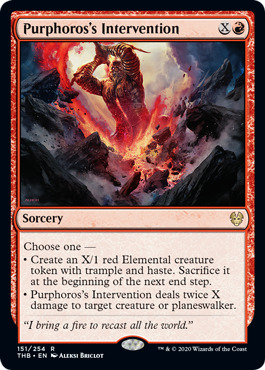 Split card of kill a creature/planeswalker and kill the opponent isn’t a bad combination, and this is fairly cheap when going after creatures. Most red decks would rather lean on more damaging spells, since this isn’t very efficient when attacking the opponent, but it’s a good card to have if you’re not sure which mode you need in a matchup. 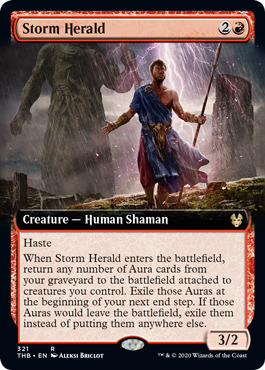 Can anyone say Eldrazi Conscription? Granted, that’s a modern combo, but it’s a very sweet one. This also is worth keeping an eye on because of how much free stuff it can put into play, with there being no limit to how many Auras you can bring back. Given enough self-mill, and good enough Auras, that could be a big game. 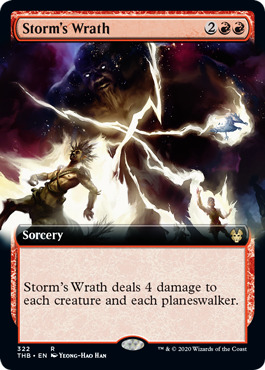 Red isn’t the traditional color of control decks, but Fires of Invention has shifted the paradigm. This is the perfect play on the same turn as Fires, and hitting planeswalkers is pure upside. Making sure you don’t get wiped by this is a high priority, and be aware of what you’re putting into play against any red deck that isn’t breathing down your neck with 1-drops. I like having this around, and it adds nicely to the texture of the format. Cards like this can also have an impact even when they aren’t super popular, as people will change their deck compositions to play around this, making it less popular, and so forth. 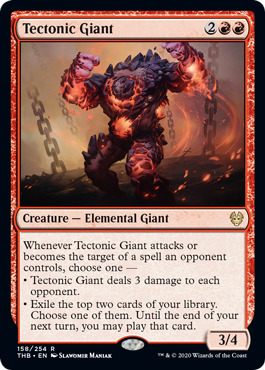 Tectonic Giant is on the border of too expensive for aggressive decks, but what it offers is some very real value. This nugs the opponent even if they kill it immediately, and if you aren’t close to killing them, can just draw you extra cards instead. If it ever survives to attack, it puts them in a tough spot, and has good enough stats to live through most combats. I like this more in a midrange red deck, as their curve goes a bit higher, but it also seems good in aggro sideboards. 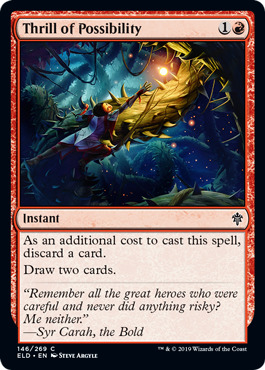 This already is in the format, and sees minor play. That will continue – how thrilling.

Underworld Breach has already spawned some pretty sick combos in formats such as Pioneer, Modern, and Legacy, and it’s not impossible that it would make waves in Standard. It goes off with Chronic Flooding and Hidden Strings in Pioneer, Lion’s Eye Diamond and Brain Freeze in Legacy, and those are just the first two weeks of combos. This is an incredible card, and one that will show up in a multitude of decks across formats.

Red got some wild combo cards, with both Breach and Ox offering a ton in older formats. For Standard, Phoenix appears to be the best of the bunch, though there are some other solid role-players floating around too.