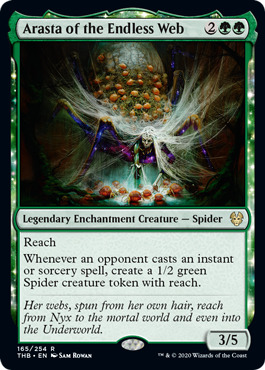 Arasta of the Endless Web

Arasta spins quite the web, so you just need to find a matchup that overlaps between having lots of spells and being stopped by 1/2 spiders. That could be mono-red, as some builds will be vulnerable to this, making Arasta an interesting sideboard option. 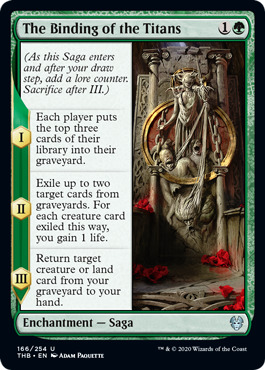 The Binding of the Titans

I’m getting Satyr Wayfinder vibes from this one, but having to wait two turns until you getyour card is a tough sell. If there is a deck that desperately needs self-mill, this could be the answer, even if it’s slow. 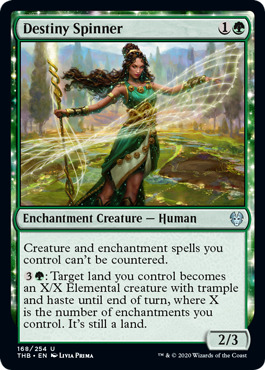 I like making all your stuff uncounterable, and this could be a solid way to battle against the Flash decks. It even gives you some pretty good stats, as a 2/3 is exactly big enough not to die to Bonecrusher Giant. The land animation ability is also something that could become relevant in the lategame, as sinking mana into making 3/3’s or 4/4’s is some good extra value. You aren’t likely playing the card for that ability, but it’s a good freebie. 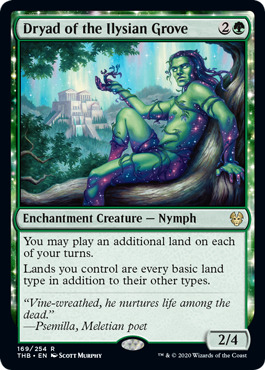 Dryad of the Ilysian Grove

Dryad of the Ilysian Grove does a couple very neat things. First of all, it lets you play multiple lands a turn, which is of interest to decks like Amulet Titan or Valakut in Modern, or Ramunap Excavator decks in Pioneer. Having the Exploration effect going is big for these high land count decks that have expensive finishers, and getting a 2/4 body on top of that isn’t a bad deal. The second effect does more than just fix your mana, too. By making all of your lands into every type, it makes Valakut go nuts, and start shooting Lightning Bolts as soon as you have six lands (including the Valakut itself). All that adds up to a pretty intriguing card, and one that has a lot of potential in a few different arenas. 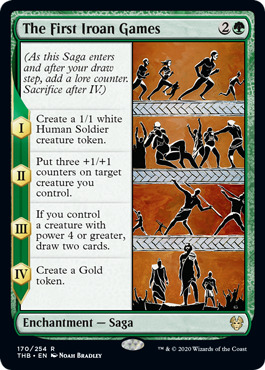 If you’re confident you can keep a 4-power creature in play, The First Iroan Games is a very powerful card. You end up getting 4/4 worth of stats, two cards, and a participation trophy all for just three mana. Sounds like a great deal to me, so get ready to combine this with some big creatures (in order to give yourself a higher chance of drawing the two cards). 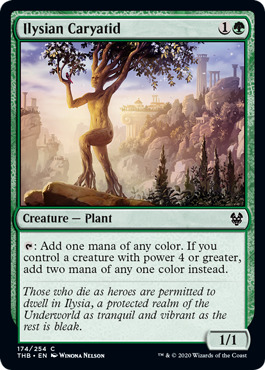 Every 2-drop accelerant has seen some play at this point, though this is more fragile than most. If you’re reliably getting two mana from this, maybe it’s worth the risk, but proceed with caution. 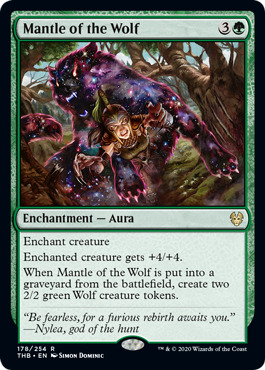 Mantle of the Wolf

Mantle of the Wolf is somewhat interesting for Bogles-style decks. Throwing this on a hard-to-kill creature amps up the pressure a ton, and if they answer with a sweeper, you have a pair of Wolves as a backup threat. 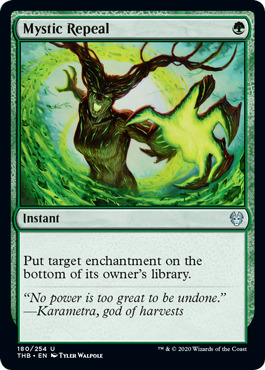 There’s something to be said for efficiency, and Mystic Repeal has that in spades. It also has the word “Repeal” in its name, which is kind of an unfair advantage when I’m the one doing the grading. This is a great answer to enchantments, and despite being narrow, is extremely cost-effective and doesn’t even put the card in the graveyard. 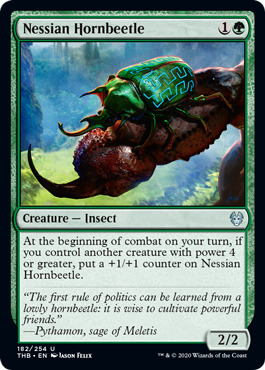 If you reliably have 4-power creatures in play, you’re probably winning, but Hornbeetle can make you win even harder. It does ramp up quickly, so keep this in mind if your green decks need another threat. 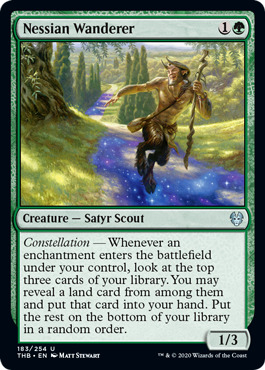 A 2-mana source of repeated card advantage is very enticing, and Nessian Wanderer could easily be an important part of Constellation decks. It blocks small creatures and can consistently draw you extra cards, which is a great deal. 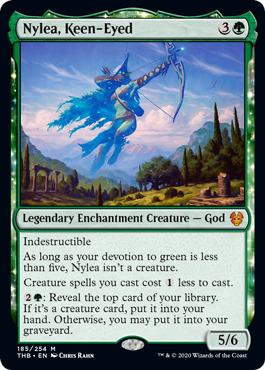 The devotion-based gods tend to offer a combination of enchantment-like bonus and a sizable threat, with each deck leaning on one aspect more than the other. In Nylea’s case, she’s not quite enough if you aren’t making her a creature most of the time, so try and be as close to mono-green if possible when utilizing her. The ability to draw extra cards does help against sweepers, and the cost reduction combines nicely with it. Overall, Nylea is a solid 1-2 of in heavy green decks, but isn’t a flagship build-around like Thassa. 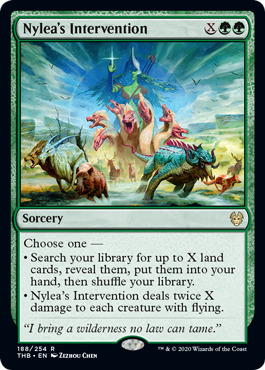 Nylea’s Intervention is about as useful as those staged interventions where everyone thinks their friend has a serious issue and it just turns out they have picked up a time-intensive new hobby, one that isn’t problematic at all (think someone who always smells like beer, but it turns out they just have been delving into home brewing, and aren’t constantly drunk). Nylea just doesn’t get much done here, as the anti-flying mode is a sideboard effect, and paying 4+ mana to draw some lands isn’t thrilling either. You can do a lot better than this for either half. 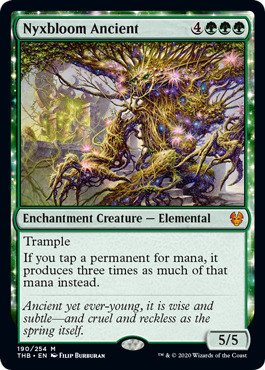 I won’t claim to be the foremost expert on Commander (I defer to Eric Levine on that front), but this looks like it could be awesome there. It is the home for ludicrous mana engines, after all, and it doesn’t get more ludicrous than this. 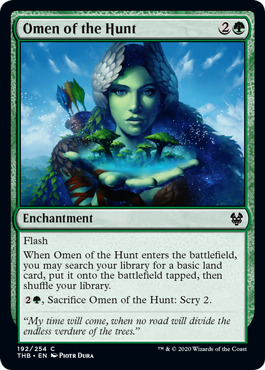 Omen of the Hunt

I like some of the synergies going on here. Omen of the Hunt isn’t playable just straight-up, but when combined with cards like Enigmatic Incarnation or constellation, it can be a solid role-player. 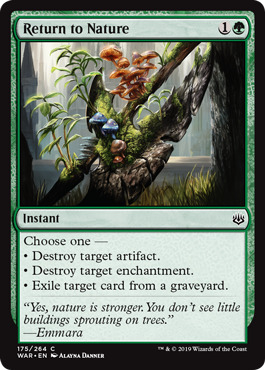 This continues to be a fine sideboard card. 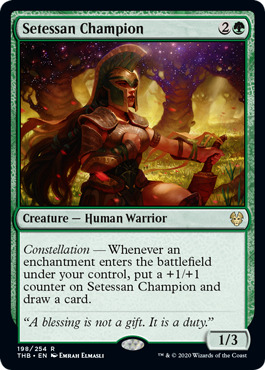 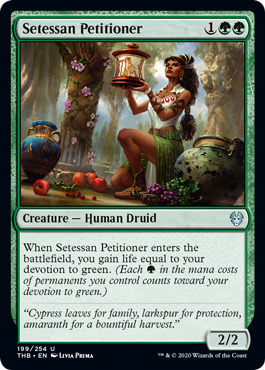 Setessan Petitioner is a good way for heavy green decks to fight back against burn. You can easily gain 5+ life off this, and at a cheap rate too. The more all-in red decks get, the better Petitioner gets – you don’t want to be siding this in while red decks side in Phoenixes and Tectonic Giants. 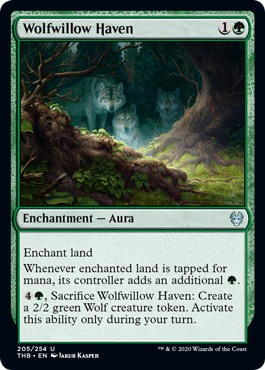 Don’t sleep on Wolfwillow Haven – it’s a great accelerant that doesn’t die to removal. You can even cash it in later for a 2/2 if you’re super flooded, though that won’t come up too often. This also helps Hidden Strings combo decks work in Pioneer, which is a neat trick.

2. Dryad of the Ilysian Grove

Green didn’t get the best of it in this set, but it does have some interesting build-arounds. It’s ok, I think green is going to be more than fine, as it was the strongest color and still likely is.