Eldritch Moon spoiler season is underway! So far we’ve seen the madness unfold with a new Emrakul, a new meld mechanic, and a good old Werewolf, but the card I’m most excited about is a sane white creature.

This card is confirmed as an official card preview by Elaine Chase from Wizards of the Coast. It is the Buy-a-Box promo you can get for purchasing a full booster display in participating game stores.

This new Thalia is pretty powerful, perhaps even up to Legacy. But I when I saw the card, I mostly thought of Modern and Standard, so I’ll focus on those formats.

For Modern, a 3-drop that dies to Lightning Bolt is not great as your opponent can gain 2 mana on the exchange. Yet, the same holds for Merrow Reejerey, so if you put her in a deck with plenty of other Lightning Bolt targets, then that need not preclude her playability. As for her size, a 3/2 first strike means that she can rumble with Kitchen Finks or Wild Nacatl and live, so that’s at least decent.

In Standard, 2 toughness implies a vulnerability to Fiery Impulse and Kozilek’s Return, but fortunately those cards don’t see a lot of play in the current metagame. More importantly, her body matches up well against popular creatures like Sylvan Advocate and Tireless Tracker. She can beat them in combat by herself, at least early on. And with any +1/+1 boost (from Always Watching, Dromoka’s Command, or Thalia’s Lieutenant), she can also attack into Kalitas. So you get a reasonable size for your 3-mana investment.

Against most decks in Modern, this might as well read “lands your opponents control enter the battlefield tapped.” It’s not uncommon for mana bases to consist of 85% nonbasics or more, so Thalia will hit pretty much every land your opponent plays, slowing them down considerably. Even Mono-Blue Merfolk, in an attempt to get around Choke, usually runs Minamo and Oboro!

Against decks with fetchlands, Thalia’s ability can be doubly annoying. If a Jund player needs to fix their red mana by fetching Blood Crypt with Verdant Catacombs, then Thalia essentially Time Walks them twice. It’s not as bad if they can afford to get a basic Forest, but they don’t always have that luxury.

In Standard, mana bases don’t contain as many nonbasic lands as in Modern, but Thalia’s ability is still a nice bonus. The 2 decks that are currently dominating the format run between 40% and 60% nonbasics: the Green/White Token deck typically has 10/25, and Bant Humans generally has 15/25. Control decks and 4-Color Rites often have even more nonbasics. But the raw numbers don’t tell the whole story. 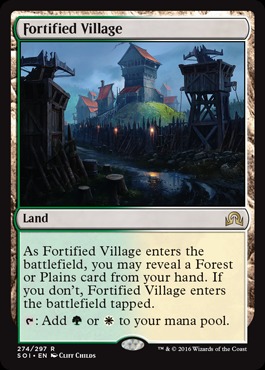 Certain nonbasic lands, like Fortified Village or Evolving Wilds, are often played on turns 1 or 2, which means that opponents have basic lands in hand for turns 3 and 4. So if opponents sequence their lands adequately, which becomes more important with Thalia in the format, then her ability will often have only a minor effect. Alternatively, they can get around Thalia by killing her with Dromoka’s Command or Declaration in Stone on turn 4, followed by an untapped Canopy Vista and a another 2-drop without missing a beat. Nevertheless, it’s still a nice bonus, as sometimes your opponent draws an Evolving Wilds in the midgame—which is even more punishing than a Verdant Catacombs—or can’t cast Languish on turn 4 with a tapped Caves of Koilos, but overall I would judge this ability to be a mild annoyance only.

At least for Standard, this is an ability I can get behind! 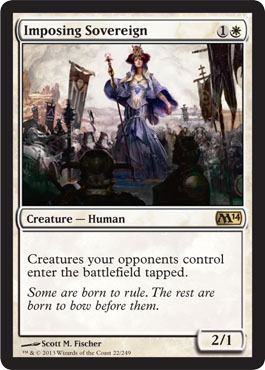 Thalia reminds me of Imposing Sovereign, a card I played in Naya Blitz and Esper Humans back in the day. The ability was consistently annoying to play against, making it very hard to come back from behind. But in the context of the current Standard format, I think tapping creatures is even more valuable than ever, for 2 main reasons:

Besides these 2 reasons, there is also the fact that Thalia curves nicely into Nahiri’s -2 ability, indicating a possible fit for a Naya Midrange deck. That synergy may not be enough of an argument for her inclusion in that deck, but it’s at least cute. She also stops Reckless Bushwhacker and Reality Smasher from, well, whacking and smashing. And a tapped Emrakul can’t eat an attacker on the Mindslaver turn. One thing that Thalia does not do is help against Ormendahl—transforming is not the same as entering the battlefield. Just be aware.

In Modern, Thalia’s anti-creature ability doesn’t excite me as much as her anti-land ability, but at least she can prevent Tarmogoyf from blocking for a turn or Master of Waves from stabilizing. Those are relevant abilities for a white-based creature deck, even if she won’t help much against hyper-aggressive decks like Affinity or Infect that weren’t planning on blocking anyway. In my estimation, Thalia’s main application might actually be against Through the Breach, Goryo’s Vengeance, or Nahiri, especially if you use Chord of Calling to get her out in response. Otherwise, if opponents see her on the table, then they’ll cast Through the Breach or Goryo’s Vengeance at the end of your turn, or they’ll keep drawing cards with Nahiri until they’ve found a removal spell.

How Many Copies to Play?

Thalia is legendary, so drawing multiples is an issue. If you play 4 copies, then the probability of drawing 2 or more Thalia in your top 10 cards (which is turn 3 on the draw or turn 4 on the play) is 13%. It’s 7% if you run 3 copies and 3% if you run 2. Obviously, any Collected Company increases your odds of getting stuck with multiples. With that in mind, and taking into account the competition for the 3-drop slot and the fact that Thalia won’t frequently die in combat, I wouldn’t play more than 2 copies, but I could see 3 on the play.

The main reason for advocating an extra Thalia on the play is that you typically put your opponent on the back foot from the start when you’re on the play, and Thalia can make sure that your opponent won’t come back from behind. But Thalia won’t help you claw back in a game where you were behind yourself, so she is not as powerful on the draw.

Where Does She Fit?

In Modern, I mainly see applications as a 1-of in Abzan Company: you can cast Chord of Calling for Thalia in response to Through the Breach, Goryo’s Vengeance, or Nahiri ultimate, and the “fail case” of drawing her in your opening hand is reasonable as well. With Noble Hierarch or Birds of Paradise, you might be able to play her on turn 2, which can be powerful against every single deck in the format as long as your opponent isn’t holding Lightning Bolt. A second copy in the sideboard to bring in against nonred decks when you’re on the play also doesn’t seem unreasonable to me.

In Standard, her Human creature type guides me toward Thalia’s Lieutenant decks. The name is probably a dead giveaway—it’s like R&D had planned this all along. She could fit in White Weenie, as her abilities are perfect fits for fast decks that apply a lot of pressure. White Weenie has always had some open slots in the main deck (often filled with Consul’s Lieutenant, Hanweir Militia Captain, Anafenza, or Reckless Bushwhacker) and I would consider Thalia instead of one of those open slots.

I wouldn’t play more than one because Thalia is still a little slow—it gives opponents a profitable target for removal spells, and you can’t have too many 3-drops in an 18-land deck. But an extra card that helps your 2/1 attack past your opponent’s defenses is worthwhile, and if my experience with Affinity is any indication, then a 5th 3-drop should be fine. I would also add an extra copy in the sideboard for games where you bring in extra lands.

But I think she slots best into Bant Humans. 3 mana is the perfect amount for Collected Company, and this is a deck that already wants to play Collected Company on its own turn in the hope of hitting Thalia’s Lieutenant, which is exactly when Thalia, Heretic Cathar wants to enter the battlefield as well (hitting Thalia at the end of your opponent’s turn is embarrassing).

Many Bant Humans decks these days have adopted Eldrazi Displacer—I’m sure Pascal Maynard will have something to say about that later this week—but I think Thalia fits the deck better. You probably have to choose one or the other as they both lay claim to the same slot on the mana curve, but I prefer Thalia because she is a Human for her Lieutenant and because she doesn’t demand a mana base with Wastes or 4 Yavimaya Coast.

Looks pretty good to me!

On a closing note, there is one deck that does not care about any of Thalia’s abilities in the slightest: Mono-Blue Prison. Bring it.