Pioneer just received its first round of bans with Oath of Nissa, Leyline of Abundance, Felidar Guardian and now Veil of Summer getting their walking papers. So until we see more results and more bans happen, let’s look at what remains as the best things you can be doing in the format.

Let’s start off with the sleeper deck of the format that came out unaffected by bans: Nexus of Fate. It’s among the best decks in Pioneer right now.

One of the reasons Nexus seemingly came out of nowhere to win a Magic Online PTQ and become an immediate player in the Pioneer metagame is because it was exploiting an angle very few decks were prepared for. Many of the anti-Copycat cards are either irrelevant or marginalized against what Nexus decks want to do, while at the same time Fog was positioned very well in the format. So not only did you have a deck that was well-suited to dealing with the top tier, but it featured dirt-cheap interaction against decks like Mono-Green Devotion and abused Search for Azcanta/Wilderness Reclamation and Dig Through Time to become incredibly consistent at beating early discard if not backed by a clock. 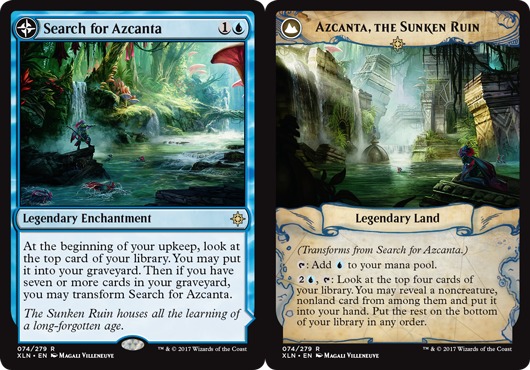 Now that decks no longer need to prepare for Copycat, they can afford to slow down slightly and no longer need to abide by the concept of always having interaction up starting on turn four. Mono-Green Devotion being significantly weakened produces a similar result. Moving forward, it should be noted that Nexus is going to fulfill the Copycat role–if you do not respect what it can do, you could simply be locked out of the game and buried very quickly.

Turns out that extra bit of text on Wild Slash may be more relevant than everyone thought. Questing Beast is another fun solution if the decks lean too heavily on Fog to preserve their life total that also happens to be well-positioned to pressure planeswalkers in other decks. If you’re looking for the next level of abuse-potentially-busted-cards, a deck with Wilderness Reclamation and Dig Through Time is a good place to start. What does this mean for the rest of you?

You must interact on the stack, destroy enchantments without Abrupt Decay or be able to consistently attack through Fog

For a slightly fairer deck, Izzet Phoenix is thrilled to have survived the first wave of bans with Treasure Cruise intact. While for game one the deck is typically limited to interaction of the burn spell and attacking variety, post-board it can bring in countermagic while still presenting a respectable clock. Most builds have some number of Spell Pierce and/or Mystical Dispute in the board. Another option is simply threatening a much faster lethal, as The Royal Scions +1 with Temur Battle Rage on the relevant attacking creature is a massive burst option currently underexplored.

One thing I’ve noticed is getting dragged into longer games against this deck is typically a death sentence if they ever see Treasure Cruise. Turns out Ancestral Recall drawing more cantrips and Recalls is good, who knew? If you have graveyard interaction, then it can be a valid strategy and one we often see utilized by Sultai Midrange with Scavenging Ooze and Kalitas, Traitor of Ghet to limit Phoenix recursion and the amount of food for delve. You can also attempt to go wide around it, but Thing In the Ice needs to be respected for that plan to actually work.

People are already griping about the power of Teferi and Oko and before the Oath of Nissa ban you saw them quite often. Ignoring the question of whether it’s healthy for the format to have these cards, there’s no reason to think we’ll see significantly less fewer Teferi, Oko, Narset and Nissa (and Baby Jace if that counts for you).

I believe it was Sam Black, though it may have been Ari Lax, who said that in the context of Pioneer, Narset could often be just a better iteration of Dig Through Time. This wasn’t a jab at Dig Through Time, but rather a reminder that even ignoring the curse she brings to the opponents draw, Narset is an untap step away from imitating a card many people think is borderline broken… minus all the setup. This illustrates how powerful a card like Narset is in this format if people aren’t playing aggressive creature strategies or cheap planeswalker interaction. For combo decks and as a 2-of in control, I suspect we’ll keep seeing Dig, but for more proactive decks expect to see more Narset and 3-cost walkers.

I suspect this problem may end up self-correcting, but as we saw with Copycat, it only takes a strong proactive strategy with a few bonus synergies to make the best planeswalkers feel completely oppressive. For anyone still wondering, this is why Oath of Nissa got the axe and not Once Upon a Time. While OUAT is still egregious in its own way, nuking Oath now is going to save a lot of trouble down the line.

This isn’t Modern; playing Protect the Queen with your walkers will win a lot of games if your opponents can’t go over the top or otherwise setup board states to immediately deal with them

The strongest artifact aggro decks were held back by simply being a step below the busted things you could do with Mono-Green Devotion while also being held in check by Copycat forcing you to run bad interaction. With these primary dealbreakers now out of the format or severely weakened, it makes synergy aggro look more appealing. These decks are still soft to cards like Abrupt Decay but have a very quick clock and a lot of strong synergies. You don’t need to rely entirely on making an early 5/5, as Ghostfire Blade on difficult to block creatures and Shrapnel Blast are quite the tag team themselves.

Another underrated aspect of these decks is that they can run any sort of sideboard hate / interaction they want with their mana. Even if you don’t run Springleaf Drum, simply having access to Spire of Industry and Mana Confluence make splashing super easy. Imagine having a sideboard that could feature anything from Thoughtseize, Metallic Rebuke, Stubborn Denial, Abrade, Rest in Peace, Noxious Grasp, Experimental Frenzy, The Antiquities War and so on.

Normally just taking some aggressive early trades would be enough to KO this style of deck, but with Emry, The Antiquities War and Frenzy all available I’d be surprised if that was the case for post-board games. This also doesn’t cover the Golgari Scales, decks which are more tuned to be powerful midrange decks and have maindeck interaction in Thoughtseize along with multiple ways of multiplying counters across your entire board.

This is where I’m currently at for Ensoul.

And something I’d like to try now that killing mana dorks isn’t priority #1, a throwback to Vehicles with a fresh new planeswalker everyone is raving about.

As for other aggro strategies the red deck gained greatly by removing two strong linear decks from the format and reducing the consistency of others like Kethis. While the burn package isn’t that good, everything else about the red decks reaches high watermarks and it should be a player as the most broken decks keep getting whacked. Brian Demars wrote more about the aggro decks of the format here.

Winning game one with removal isn’t enough, because recouping resources in the lategame is far easier in Pioneer

Green Devotion may be “dead,” but the core concept remains alive and well as ramping out strong threats every turn is quite reasonable. Jamming an early Ugin, the Spirit Dragon trumps just about everything the fair decks are doing while also being hard to directly remove. Meanwhile the deck also can search up cards like World Breaker, Emrakul or Ulamog to threaten the unfair decks or anything else trying to go over the top. Anyone sad their Devotion deck got nerfed should be looking at RagingTiltMonster’s PTQ T8 list as a potential replacement.

This is one of the most interesting post-ban shells to look at because the format should naturally slow a bit and you aren’t forced to represent interaction against Copycat all the time. You have a natural edge on fair decks with Field of the Dead and Ugin just dominating most of what decks like Scales or Phoenix can do to you. You also minimize any potential impact of creature removal instead of doubling down on Elves like the Devotion lists did.

The format is evolving at a very fast rate and I’m excited by the aggressive banning policy that Wizards is taking with the format. While I understand a bit of the frustration this causes, I have to say it’s rather unfair to blame them for doing exactly what they said they were going to do from the get-go. You can blame them for Standard’s current predicament, which caused a number of larger tournaments to swap to a brand-new format, but giving them flack for following through on their ban announcements is silly. My personal belief is that the whole format was essentially a beta test via Magic Online where the data is clear, easy-to-track and immediately able to be acted upon. At the start of 2020 we’d have the full rollout of the format along with the promised OP support and the bans calming down because presumably the format would be in a good place. Instead everything got thrown out of whack by tournaments swapping over to Pioneer with effectively no notice.

As for me, I actually reinstalled Magic Online to play the format and plan on playing it locally because it’s such a breath of fresh air. Magic players typically love wide-open formats and it will be a while before that new car smell goes away. I think this format lines up really well at that casual-competitive level, as you can play decks that are borderline-Standard upgrades or wacky things and still win with them. Meanwhile, there’s a clear top tier for the more competitively inclined, it doesn’t feel like nearly the uphill battle when playing some janky fun against a top-tier deck as it does in Modern or Standard currently. Hopefully that feeling remains for months and maybe even years to come.