Wizards of the Coast just announced the Throwback Standard Gauntlet Series coming to Magic Online in February 2017, so there is no better time to bring you part two of my own take on a Standard throwback gauntlet, The Gauntlet of History!

In the last article, I forgot to mention the importance of having the right basic lands. Necro will have Ice Age, Pros-Bloom Mirage, and Sligh Tempest.

I’ve been familiar with this deck for a while because of a friend who owned a copy of the gold-bordered 1999 World Championship version by Kai Budde. I goldfished that deck between rounds of tournaments numerous times, enough to know how fun it was and that it definitely deserved a spot in the gauntlet.

Again, I went ahead and built the exact 75 Kai used. The sideboard looks well rounded—I expect those Spellshocks to be useful against control and other storm-type combo decks such as Heartbeat and Pros-Bloom. 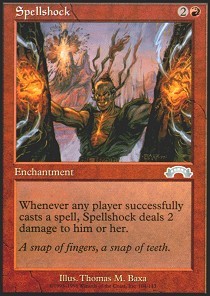 From that format, there are a few other decks I could have built, notably Recurring Nightmare/Survival and Academy, but by the time the last set came out (Urza’s Destiny), Recurring Nightmare and Tolarian Academy had been banned, along with a handful of other cards that were completely messed up. Yet, this Wildfire deck had access to Grim Monolith…

Good lord, this deck is fun to play. With the printing of Mishra’s Helix and Parallax Tide, it really makes you wonder if the designers cared whether only one side of the table was playing Magic.

Accelerated Blue, Bargain, and Tinker were also considerations, but I went with Replenish as it is more unique than the others. To be fair, all these decks look like a ton of fun—I’ll eventually add them all. 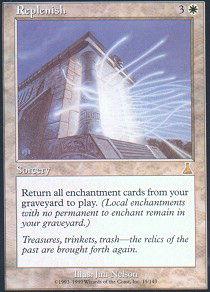 As far as the deck list goes, I took Tom Van de Logt’s 75 from Worlds in 2000. There are a few debatable slots in the main deck such as the 4th Parallax Tide, the Enlightened Tutor targets, and the 1-of Wrath of God. I will eventually streamline it, but as of now I have only played 5 games with it.

The same can be said of the sideboard—Circle of Protection: Black seems loose.

Rebels could be a contender here, but that deck dominated Block Constructed more than anything. In Standard, it was pretty clear, looking at results, that Fires was the dominant deck.

In fact, there were so many versions of it: Temur, Jund, Naya, even 4 colors. I decided to just take a straight 2-color one, mostly because it looked the least tweaked for the specific metagame, and just had all the elements I wanted.

Black had Spiritmonger, Terminate, and Thunderscape Battlemage, white went with Rith, the Awakener and Aura Mutation, and blue for both sides of Fire // Ice and counterspells. Between the 10 painlands available at the time, Birds of Paradise, and City of Brass, splashes were not very costly. 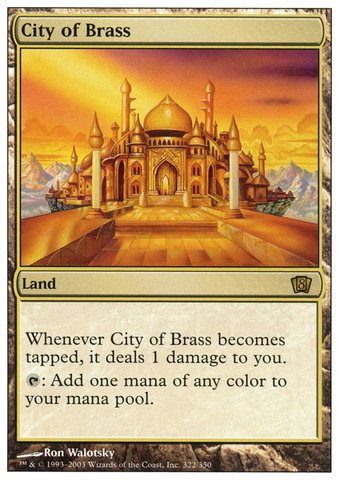 My 75 is a mix of Eugene Harvey’s that he used at a Pro Tour and Worlds—I just changed a few weird numbers and changed the sideboard to something that seemed less targeted at the mirror.

For what it’s worth, I will likely build Rebels for the sake of it—it had an enormous impact on the game and is quite unique. Counter-Rebels seemed to be the most important Standard variant.

Before playing with it just recently, I never thought Tog was that good. The draw spells are unreal, the counterspells are among the best ever printed, and the win condition is a delight. I haven’t even mentioned how absurd Upheaval is.

This is Carlos Romao’s Pro Tour winning deck list. It is quite stock—some have Force Spike or play red, mostly for Flametongue Kavu, Burning Wish, and Fire // Ice.

The other popular deck from that time is Squirrel/Oppo, a deck based around Opposition and Squirrel Nest—which, admittedly, is hard for me to omit.

Stay tuned as I move forward in Magic’s Standard history!