The deck we’re looking at today stood out to me almost immediately, and was one of the first decks to emerge after the banning of Felidar Guardian. That being the case, these videos were recorded last week, before the Pro Tour, so the metagame has shifted slightly since then, but the strategy of the deck itself might still be sound.

The deck in question was piloted to a 5-0 finish by Magic Online user JacksonHicks1, and it has a few unique and interesting choices that were sure to pique my interests. Take a look.

Cool card roll call: Channeler Initiate, World Breaker, Insult // Injury, Bounty of the Luxa, Glorybringer! Yeah, while some of these might be a little more popular than others *coughGlorybringercough* they’re all new or obscure cards that I don’t mind seeing in a deck together. 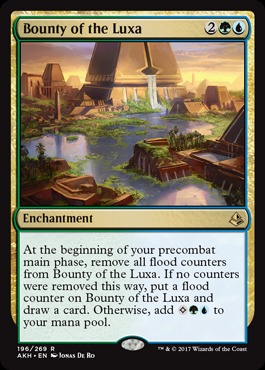 Bounty of the Luxa is one of my favorite cards. There are a couple cards in Magic’s history that have done similar things, with either the static reward of an extra card each turn or alternating rewards. The only issue I have is that Bounty costs 4, which might be a little slow for current Standard, but I’m eager to find out. 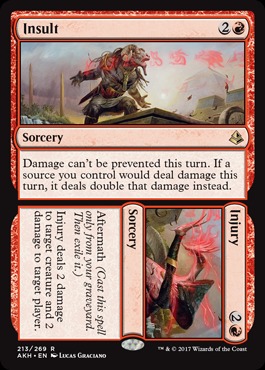 This list also has 2 copies of Insult // Injury, which can be an extremely powerful card, even more so when playing both halves in the same turn. When this is the case you can deal 8 with Glorybringer, attack for 8 with Glorybringer, kill an opposing Glorybringer, and deal 4 damage to the face. That’s a lot of bonus damage. But let’s see if things actually work out that way.

Hmm. That certainly didn’t go according to plan. What went wrong? Well, a couple of things I reckon.

Despite having 20 creatures, this is not an aggressive deck, that’s for sure. You have three 7+ mana creatures, and six actual mana creatures. That leaves about 11 other creatures, but those are mostly cards that provide energy. The catch is that you don’t have much to use that energy on, a la Aetherworks Marvel, other than Harnessed Lightning or 2 Whirler Virtuoso. Combined with the 4 Attune with Aether, where is all this energy going? Well, nowhere really.

You don’t have a big payoff card like Aetherworks Marvel, and your deck isn’t controlling enough to deal with a swarm of ground creatures. And I’m not sure if you’ve noticed, but this format is all huge payoff cards and ground creature swarms. A Sweltering Suns or Radiant Flames in the sideboard might make a huge difference, but as of right now, similar decks are doing what you’re trying to do better.

I’ve also become less and less of a fan of Dissenter’s Deliverance in the main deck. Sure, it takes out Heart of Kiran, but against Aetherworks Marvel, they’re still going to get an activation. I get frustrated when a deck has holes, but wastes valuable slots on narrow cards. Though to be fair, at the time this deck went 5-0, Mardu Vehicles was still the bogeyman.

I’m not exactly sure what you can add to this list or change to make it more competitive. I do know I like a lot of the cards it’s playing though. Unfortuntaely, it’s just not a better Temur deck than Temur Aetherworks, which makes it hard to survive in this format. I would love to see a few copies of Nissa, Steward of Elements, but I’m not sure that would make a huge difference. The main problem is surviving until you can cast your Ulamogs, which presents a two-fold problem: one is drawing them, as you only have 2 in the deck, and the other is that you’re not especially fast. This is a non-Marvel deck in a Marvel world, and as fond as I am of it, I’m not sure that’s good enough.