Flamewake Phoenix is one of the most exciting preview cards to me. It’s an aggressive red creature capable of attacking through a Sylvan Caryatid and Siege Rhino and a resilient creature that can be a total pain for an opponent to deal with. 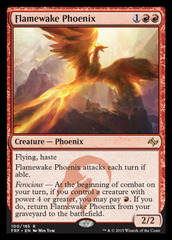 The card that this is most obviously similar to is Chandra’s Phoenix, which has proven itself Standard playable in multiple formats. However, the key differences with this new Phoenix are that it returns directly to play, saving you a bit of mana when you return it, and that it triggers from having other permanents in play rather than using a spell in your hand. This is key because it means that if you were able to trigger it once, chances are you’ll be able to trigger it again next turn off of the same permanent.

Chandra’s Phoenix was never really used alongside sacrifice outlets because of how time-consuming getting it from the graveyard back into play was, but I think things might be different with this bird. There are a few viable sacrifice outlets in Standard now, namely Tymaret, the Murder King and Butcher of the Horde.

The combo with Butcher of the Horde is one I’m particularly excited about as the two cards seem perfectly designed for each other. Butcher both is a 4+ power creature and wants creatures that don’t mind being sacrificed to help power him up. If you’ve played a Phoenix at any point in the game (and it didn’t die to Anger of the Gods) any Butchers you draw will be able to have haste the turn they come into play and probably pick up a few other abilities on subsequent turns as you can sacrifice an already in-play Phoenix main phase for lifelink and then recur it at the start of combat.

Phoenix is also a great enabler for discard outlets because you get a discount on it when you return it to play. Tormenting Voice was already a fringe card that I’d seen as a 1- or 2-of in a few Mardu lists, but with Phoenix and Bloodsoaked Champion, you now have a critical mass of cards that are great to discard to help power up the Voice and create a legitimate card drawing engine.

This is a sweet aggressive Mardu deck with a more controlling sideboard plan (common in this Standard format). Game 1, I would expect to run my opponent over with a bunch of sweet hasty fliers or perhaps Rabblemaster while using Tormenting Voice to help smooth out my draws and make sure that I hit land drops going into the later game. Planeswalkers shouldn’t really be an issue for this deck thanks to all the hasty fliers, so the removal suite can be geared toward just taking out opposing creatures as efficiently as possible.

Hyper-aggressive decks might be a challenge with this list, as it’s somewhat removal light and can’t make great use of Anger of the Gods due to wanting the creatures to end up in the graveyard. Arc Lightning or something simple like Lightning Strike could help shore up that weakness if those decks are successful in the new format.