The plot here is like Clue/Murder She Wrote meets Godzilla/Independence Day. Act I is all Magnifying Glasses and proper investigators wearing silly hats because those silly hats were used in Innistrad the first time and now there is no choice—you have to use the same hats. Then Act II is the biggest creature you’ve ever seen blacking out the sky.

In terms of the card, you needed a big colorless finisher about as much as the movie Clue needed Godzilla. You were ready to move on from Eldrazi. “Mystery Lunch” in the cafeteria on Wednesday should probably not be the same lunch you served Tuesday.

The next person I meet who enjoys counting the number of types in their graveyard will be the first. People don’t enjoy it and aren’t particularly good at it either. Why would you zoom in on that? An enigma as vexing as life itself.

Sometimes a mechanic is released in very small doses because Wizards is worried. Something doesn’t feel quite right. Maybe not every member of R&D feels the same level of uneasiness. Maybe they couldn’t find anything else to replace it with in time. But the tentativeness is there, evidenced by the presence of only 3 pairs of meld permanents in Eldritch Moon.

The pairs look pretty cool, but I’m as concerned as Wizards appears to be about how fun this will be. The reward for the work has to be big, and getting there is always going to be annoyingly hard to control. Did you even open card B in your Sealed Deck? Did you draw your matching card before your opponent drew their matching card?

Again, we can glean from the spoiler that I am not the only one with these concerns. Of the 3 pairs printed, 2 of the 3 pairs include a Gravedigger/Zombify effect to smooth things out. Plus, they had to put “both own and control” in the rules text to get past some rules issue. This all adds up to a potentially clunky mechanic.

Interchangeable parts are just more fun than locked-in combos. When the card says in big bright letters “PUT THIS INTO PLAY WITH CARD B,” where is the creativity, where is the opportunity to do it a little better or cooler than the guy or gal at the table next to you? Paint-by-numbers has a time and place, no question, but I have another issue here:

We’ve given up a lot to get the mechanic into this set—what do you get for it?

Are you serious? Not one cool equipment that is two types of metal melding into a badass alloy metal equipment? No Geist and land that meld into a haunted house? No lovers who meld into a married couple and produce a kid token who then gives the parents resentment counters? No Steph Curry and Klay Thompson, who meld into a green enchantment that prevents Islands from untapping? 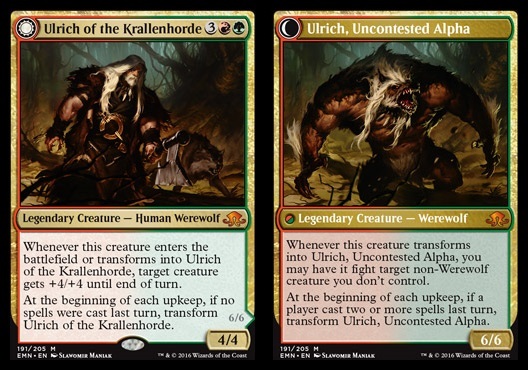 Why can’t he fight other Werewolves opposing him on the battlefield? He’s the uncontested alpha of his pack—does that sound like someone who’s backing down to other Werewolves? Whatever, it isn’t an Eldrazi—I’ll take it.

Some of your opponent’s most powerful threats have entered their personal information into a web form despite Chrome’s security warning. Take advantage with this cool new card.

Scorekeeping Software Not Being Free and Open Source

At a recent Grand Prix, there was a 3+ hour delay and a pairings nightmare when the scorekeeping software went down with no easy backup. This should not be complex software prone to crashing. This should not be proprietary software (if a competitor can quickly and easily do better, starting from scratch, that’s a big hint that this shouldn’t be proprietary). Let a community of volunteer developers build and maintain tournament reporting software that is agnostic to what game it is used for, but captures all of tournament Magic’s needs in a customizable way. Do it for everyone who sat in that convention center when the proprietary version went down for no good reason.

The Ultra PRO Deck Boxes That Open Like a Pez Dispenser

Now that I’m on The Pantheon rather than Team UltraPRO, I have to say that while I found UltraPRO matte sleeves and most of UltraPROs other products to be very reliable, these deck boxes drove me nuts. They hand them out at every Pro Tour and I promptly discard mine in the nearest garbage can. What was wrong with the satchel and flap basic design? Now I’ve gotta bend this thing in half like a strongman trying to rip a phone book just to get my sideboard out. Not every design idea is a winner. Let this one go.

As they update the software, I have to periodically update how Sick of It™ I am. Recently, there are seemingly arbitrary changes to the way some cards work that don’t affect very similar cards.

Oath of Nissa is now a multi-click SELECT + CONFIRM. But when I crack Evolving Wilds, it’s just one click and I’ve selected the land. Llanowar Elves is now multiple clicks with a pop up T: Add G, but Forest is of course one click.

There are new bugs, old bugs—all kinds of bugs. I don’t submit bug reports because it isn’t a beta server and I don’t pay money to get frustrated and then do paperwork about it. I only pay for the frustration, thank you very much.

Few players defended Anteri’s failure to shuffle, but some players did admit that they mana weave, and don’t see a problem with it as long as shuffling is sufficient after the weave.

That’s like your accountant saying they spend time making up a bunch of fake, favorable numbers on your tax return, but it doesn’t matter because they replace them all with the real numbers before filing. Um, can you not? Maybe spend your time doing something—anything—less fishy than doing the wrong thing, followed by undoing the wrong thing.

Mana weaving, then randomizing, is like a pro athlete applying a banned adhesive substance to their hands 30 minutes before a game, then washing it off their hands with nail polish remover 20 minutes before the game. “It was totally washed off—it’s not cheating at all.” What is the point of this? Stop.

The One Big Land Stack

Speaking of easy ways to look like a cheater even if you aren’t one—how about the habit of using a giant stack of lands or a couple stacks that have to be picked up off the table to be manipulated, spread out to be counted, and balanced like a Jenga stack if some are tapped and some are untapped. Judges should not allow this, period. The battlefield is 2 dimensions, not 1, and not 3. If you insist on doing this and you ever try to cast a spell you don’t have the right color or quantity of mana to cast, and your opponent has to ask you to “spread ‘em” like a correctional officer to discover it, you should be banned for a minimum of 5 years.

Thanks for reading,
Matt Sperling