I liked the original Innistrad a lot, and I had great hopes for a set that revisited that world. I was not disappointed. I love Shadows over Innistrad. I love the flavor, I love the cards, and I love their power level. I want to play with it before making stronger conclusions, but it’s likely to be my favorite set in a long time.

We’re going to see the number of colors in Standard diminish since fetchlands are rotating out. This means that some casting costs actually get easier to cast. A card like Relentless Dead wouldn’t be easy to cast in a 4-color deck even with great mana, but it’s likely easy to cast on turn 2 in a blue/black Zombies deck. So if you see a card with a “specific” casting cost, it doesn’t mean that it won’t see play.

It looks like Shadows over Innistrad has a lot of self-contained synergy, but its cards are actually good enough to make the synergy work. Take, for example, Vampires—I wouldn’t say there’s existing support for a Vampires deck, but there are so many good Vampires in Shadows over Innistrad alone that you don’t need the support anywhere else. It’s not, however, exclusive to itself, as the Vampire cards can pair well with what you already have (unlike, say, the Eldrazi cards, or multicolored cards in a mono-colored environment).

That said, a lot of the cards in the set are good with the condition that their archetypes are good—some tribal Zombies, Vampires, Humans, and Spirits cards are only played if their respective archetypes are played. I’m pretty sure that there are already enough Vampires to make for a competitive archetype, so those cards are definitely going to see play. For Zombies it is likely, but the others remain to be seen.

This is the first example of a card that’s hard to evaluate—it’ll only be good if Humans are a thing in Standard. If they are, then I think it’s quite powerful. It’s a 2-mana lord that doesn’t grow creatures that are played after it, but it grows itself, so it’s still about the same. In the last Innistrad format, there was a Humans deck with Champion of the Parish, and that deck would certainly have played a playset of Thalia’s Lieutenant, so if you see something like that again, this card will be played. 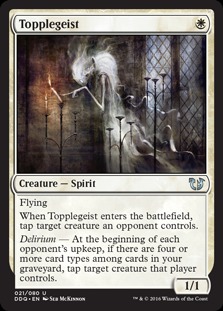 A 1/1 flyer for 1 is not super exciting, but Judge’s Familiar has shown us that with a relevant enough ability and in the right context, it can be playable. Topplegeist has a relevant ability—stopping a blocker—and it also has a creature type that could become relevant in the future (Spirit). I’m assuming most aggro decks cannot turn on delirium very easily without fetchlands, especially since they aren’t always interested in the likes of Evolving Wilds, but if you can, then it effectively stops a creature every turn, which is a powerful ability for a 1-mana creature. 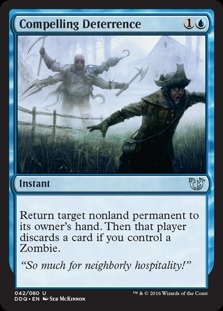 I remember when Recoil was a card, and it was quite good. Of course, times were different, and it also bounced lands, but this card costs 1 mana less. If there is a deck full of Zombies, then this card will also be very good.

Epiphany at the Drownyard

I’ve been fooled by this card once already (Steam Augury), so I approach it with caution, but I think this is a better version. For starters, it’s mono-colored, which is a huge improvement. Then, it’s customizable—you can, theoretically, play this on turn 2 (when they won’t know if you need a land or a spell, or what kind of card you’re looking for), and you can also play it on turn 20 for a lot more. Finally, you are in a format that supposedly cares more about the graveyard than the one Steam Augury was in. Without fetchlands, it can be sometimes hard to flip your Jace early on, but Epiphany at the Drownyard can put many cards in the graveyard early on at instant speed.

I don’t think this is the next Fact or Fiction, but it’s also not the next Steam Augury, which means it’s probably going to see play.

5-mana planeswalkers have to be exponentially more powerful than their 4-mana counterparts since they take longer to activate and they’re harder to defend. I think the new Jace is fine in a control deck, but probably better in a deck with an aggressive element where you can use the bounce ability more effectively. Whether Jace is good will depend on the threats you’re facing—if people are tapping out for 4 and 5 mana creatures, then he will be excellent, as you will be able to play him and bounce their only creature for an empty board. If people are playing multiple 2- and 3-drops, then he won’t be as good. I

He showcases just how broken Jace, the Mind Sculptor truly was. It cost less, had more abilities, and even had the same ability at half the loyalty cost.

Pieces of the Puzzle

We’ve seen this type of card (Uncovered Clues), and it was very bad, but this digs 1 card deeper and puts the rest into your graveyard, which is significantly better than putting them on the bottom of your library. I think this is good enough to see play, and I like that it flips Jace immediately no matter what.

The next in the 2/1 fly flash for 1U list, Rattlechains is quite impressive. The body is good and the two abilities are good, and though I don’t think it will make a Spirits deck by itself, it’s solid enough that you can play it with a few Spirits and it’ll still be good—it is a lord, in a way, but not a lord that demands a tribal deck (if you have Rattlechains and 2 other Spirits, for example, the abilities are already likely to be great). I think this will see Standard play.

Welcome to the Fold

Not good enough to be played by itself, but good enough if you have convenient madness outlets. This pairs particularly well with Jace since it’s a way to discard it and has a flashbackable effect. Yes, I’m aware that I keep writing “pairs well with Jace.”