Red Deck Wins indeed. Joel Larsson took down the Pro Tour, and if the top Standard lists are any indication, Mono-Red and UR Thopters were the most successful widely played decks at the Pro Tour. Both of them had fairly good matchups against the rest of the field and both had the notable advantage of being able to ignore the board when necessary and simply burn the opponent out of the game. Joel’s build was different from the norm in that it had Firedrinker Satyr and the full set of Lightning Berserker in the main deck.

Obviously knowing what we do now, Firedrinker is far too big of a liability to play and Lightning Berserker gets a bit worse as well. In the mirror they’re liabilities, while Eidolon of the Great Revel is generally just better across other matchups. It doesn’t mean you want to cut all the 1-drops that aren’t Zurgo or Taylor Swiftspear, but some considerations are in order. Goblin Glory Chaser didn’t seem horrendous, and you can still keep a few Lightning Berserkers around. My preference is for the Pat Cox list as far as Mono-Red goes.

I played a variation of the Cox list at my SCG Regionals event this weekend and easily went 5-0-2, great for a 9th place finish. Yeah, due to some wonky numbers and pairings an X-0-2 whiffed on making Top 8. Whoops. That was the first time I had ever seen it (or any of the judges for that matter) and was a bit sad that it happened at a tournament where I only dropped a single game. As it turned out, had I made it back from draw dinner to see standings for round 7, I would have at least gotten to play for it, but it wasn’t a possibility that crossed my mind.

The deck itself was amazing and most of my matches were ridiculously one-sided. Some mulligans from opponents helped me along for sure, but I also mulliganed in five of my games and the consistency of the red deck paid dividends.

The metagame shift that pushed this deck over the top was the number of targets for Searing Blood. Every single deck has something to hit now. Abzan Control? Den Protector and either Nissa, Vastwood Seer or Satyr Wayfinder. UB or UW Control? Nearly all of them run either Thopters, Elspeth, or Jace. Sultai Control? Jace, Den Protector, Satyr Wayfinder. Mono-Red, GR Devotion, UR Thopters, or Jeskai? Put on a blindfold, spin yourself in a circle, and fling the card on the table in your opponent’s general direction and you’ll hit a target.

Exquisite Fireblood was a solid but unspectacular addition to the deck. Primarily it allows Satyr Firedancer to be more impressive against GR Devotion and board control decks, and gives you another way to interact with Courser of Kruphix. It does the job well, and in conjunction with Searing Blood returning to prominence the amount and curve of your burn spells works out beautifully. This is why the deck was able to move away the board presence of Atarka Red with Dragon Fodder and Hordeling Outburst, and move toward the Boros Burn deck from last season.

The biggest addition from Magic Origins for the red deck was likely Abbot of Keral Keep. This fills the 2-slot with a creature that adds value without needing to attack and the prowess means it can roll into combat and trade with the majority of 3s in the format. If the opponent isn’t willing to block or simply can’t, it’s very easy to get in for 3 or 4 a turn with Abbot. With the additional burn in the deck, the mini-Chandra/Outpost Siege ability makes it a very respectable topdeck in the late game. In the older list it wasn’t quite as good, but adding Searing Blood and Firecraft helps the hit rate.

I’m reasonably sure I’m going to play this in San Diego, since there are so few decks that aren’t soft to Searing Blood and it’s nearly impossible to make the card bad in the current metagame. The sheer consistency against everyone else stumbling on mana is too tempting. Abzan Rally may have more raw power, but it can’t beat red game 1 and its mana is quite shaky. Speaking of Abzan Rally, only a handful of lists clinched winning Standard records at the Pro Tour and none of them were better than 7-3, so keep that in mind moving forward.

This was the other breakout deck of the tournament. It had the overall best performance and highest win percentage of any archetype with more than three representatives. I really need to stress this about the deck’s win percentage: the draft record of nearly all the top finishers with the deck was abysmal.

One of my friends had shown me a similar build just a few days before the Pro Tour and I’m impressed at how close they were. As it turns out, Whirler Rogue is more than just a top ten Limited card, who knew? Why you play this deck though isn’t for the creatures or adorable Thopter tokens, you play it for these: 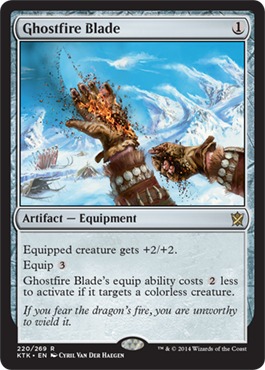 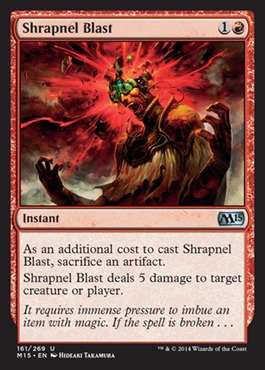 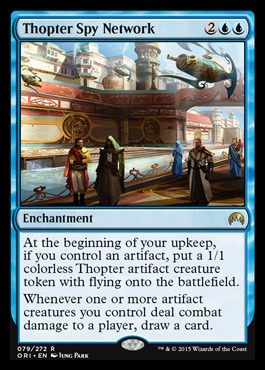 All of these cards provide amazing value for their cost and are the main selling point of the deck. By coloring in the lines, these spells reward you with some of the best mana/power ratios in Magic, let alone Standard. Ensoul Artifact was a mainstay of the Modern Affinity deck for a number of months, Shrapnel Blast has been in plenty of top tier Affinity decks, and Ghostfire Blade was just waiting for a chance to show itself. As it turns out a 1-mana, 1 to equip +2/+2 is not only Constructed playable, but the best equipment printed since Batterskull. Thopter Spy Network is the odd card out here, but there’s no card I’d rather have in the grindy matchups.

Much like Mono-Blue Devotion, the rest of the deck can be a pile of draft leftovers if there are enough—to quote a friend—“payment” cards. Out of the rest of the deck, the only other standout is Hangarback Walker which can turn into a respectable threat, but isn’t exactly the scariest thing on the block. Well, at least not until Thopter Engineer hits the field, you sacrifice Walker to Shrapnel Blast, equip a Ghostfire Blade to a Thopter token, and swing for another 5 in the air.

Moving forward I’d expect a major backlash since the hate for this deck is a bit more obvious and nearly every deck has valid options. Revoke Existence takes care of Ensoul creatures and Hangarback, Virulent Plague can keep Thopters in check, and Smash to Smithereens is effectively Searing Blood 5-8 in the red matchup. In the deck I’d recommend everyone have a good plan for when the game goes long, because people aren’t going to be taken by surprise and you may even experience a resurgence in Dromoka’s Command and Reclamation Sage to combat Ensoul Artifact.

As it turns out Jace, Vyrn’s Prodigy makes for a prime target to get hit by Searing Blood. At this Pro Tour that actually mattered. Whoops.

People need to tighten up their mana bases and run more life gain, Kentaro’s list didn’t push the boundaries of his mana, minimized his life loss and had a combination of Nyx-Fleece Ram and Courser of Kruphix. That makes a big difference when trying to edge out the current build of red decks.

Speaking of Nyx-Fleece Ram, the few constellation decks that were successful at the Pro Tour were maining them. I’m not saying that tech should be adopted by every slow grind deck, but they look a heck of a lot better now than they did just a few weeks ago.

Outside of Gaea’s Revenge, the majority of GR sideboards looked like 9 blanks and three Nylea’s Disciple. Now that you know the metagame, tighten these up.

Abzan Control did pretty badly on the whole despite Kentaro and Sperling running it back and Sperling pulling out a squeaker of a match against Pat Cox. Be aware of the limitations of the deck, because while it still runs a very good set of cards and is a good deck, it’s not nearly as ahead of the metagame as it was pre-Origins.

I’ll be in San Diego and actually getting to play for a change! Good luck to everyone this weekend, enjoy the remainder of full set Standard!

Take your first look at what Magic Esports and Professional Play will look like in the 2020-21 Season!