At Pro Tour Eldritch Moon, William Jensen, Owen Turtenwald, Paul Rietzl, and I played a RUG Eldrazi deck. It was the most confident I’ve felt in a Constructed deck in a very long time. Usually, we write these deck techs before the tournament, but the deck finally came together close to the end of our testing, so I’m going to have the advantage of writing this with a little hindsight—at the moment, Owen is about to play in his semifinal match vs. LSV playing Bant Company. Our final record with the deck was 26-13-1, and outside of myself, the pilots had much less practice playing the deck than normal. I believe a version of this deck will be a dominant force in Standard in the post-Pro-Tour metagame.

I flew to Sydney 2 weeks early this time and decided to try my hand at brewing. I played a UR Eldrazi deck that Matt Sperling and Paul Rietzl had posted and it quickly became clear to me that Deep-Fiend plus Kozilek’s Return was one of the most powerful things you could do in the format. I quickly added green to the deck to maximize the number of ways to get Kozilek’s return into my graveyard. Meanwhile, we were beginning to discover that Emrakul was the other most powerful thing to do in the format, and this shell was a natural home with all the self-mill effects. I experimented with a wide range of different builds, but couldn’t quite get there until two nights before the Pro Tour.

Wednesday night, Antonino emailed us a picture of a deck an Italian named Riccardo had posted to a group he was in. Every card in it was one I’d tried at some point or another, but he had some crazy choices like 21 lands, Jaddi Offshoots, and no Jace. But I decided to try out the go-for-broke version of the deck—and it worked. The list wasn’t perfect, but it was a lot closer than I had been and was a driving force in where we ended up. Even some choices that had to be wrong (no Traverse the Ulvenwald!) ended up being correct. By Thursday afternoon, I was telling people that I thought it would be a mistake not to play it, and Reid and Ben Rubin were “ruining the deck by insisting on playing with good cards and good mana.” 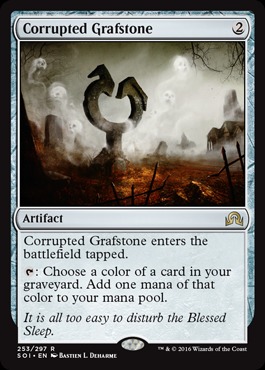 The basic plan of the deck is to race to Emrakul by putting cards in the graveyard with your 12 green search spells while using the Corrupted Grafstones and the Nissa’s Pilgrimages to ramp your mana. The secondary plan is to cast an Elder Deep-Fiend, preferably with a Kozilek’s Return in your graveyard, as early as turn 4. It is very difficult to lose a game where you flash in a 5/6 on their upkeep, tapping all their lands and killing all their creatures. And that’s just plan B! Meanwhile, your Dryads hold down the fort. 1 green mana for a 3/3 deathtouch is a very efficient rate, and he matches up very well vs. Sylvan Advocates, Reflector Mages, and Duskwatch Recruiters. He’s even resistant to Dromoka’s Command, requiring your opponent to 2-for-1 themselves to remove him from the board.

The deck is very hard to play. There are lots of complicated interactions and decisions to make. 12 of your spells function as mini-Impulses and to add to the complexity, it is sometimes correct to choose to take nothing. Properly sequencing Emrakul turns is difficult. Once I had to flip an opponent’s Westvale Abbey that the deck could not deal with game 1. In another game I had to let my opponent Tragic Arrogance my Emrakul away for a few turns. But usually when you resolve an Emrakul the game is pretty safely over. I didn’t lose a game all tournament with a resolved Emrakul. 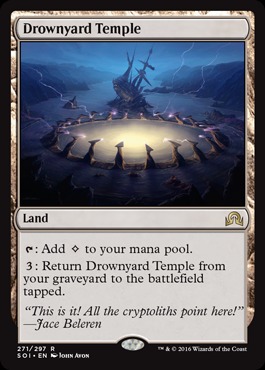 A few points on the evolution of the deck: I spent a lot of time playing with Sanctum of Ugin and Drownyard Temple, and the appeal is obvious. They’re lands that you get a spell-like effect from, and it wouldn’t shock me if a final version had 1 or 2 copies. But here’s the thing: in a deck with Pilgrimages, Grafstones, and Pilgrim’s Eyes to rush to Emrakul, it is very easy to flood out. You have to spread 3 colors over the minimum viable land count, and it is just impossible to fit bonus colorless lands into the deck without playing too few colored sources or adding additional lands. Those lands made sense when I was playing cards like Matter Reshaper that need colorless. But while Matter Reshapers (and similar emerge value cards) are pure value in a deck like this, the deck doesn’t win by out valuing the opponent. It wants to survive and sculpt a hand and board for a knock-out punch. Something that would normally be great value just becomes mostly irrelevant when you cash it in after flashing in a 5/6 that Mana Shorted them and killed all their creatures.

There is a very good chance that Emrakul decks will be the scourge of new Standard. So show up to tournaments either harnessing her power or have a deck that has a dedicated plan to stop her.

Jon Finkel's prolific talents and sterling resume earned him the nickname "Jonny Magic" long ago. After a substantial hiatus, Jon Finkel returned to the Pro Tour and immediately demonstrated why he's widely considered the greatest player of all time by winning PT Kuala Lampur in 2008 and Top 8'ing PT Avacyn Restored and PT Dark Ascension in 2012.