The previous version Cody championed, however, was black and red. This time we’re looking at black and white. A lot of players worried that the Eldrazi’s days were numbered after the banning of Eye of Ugin, but we’ve all come to discover that it’s quite the opposite. Whether you’re playing Bant Eldrazi, Eldrazi Tron, Eldrazi and Taxes, or a more linear midrange strategy like we’re taking a look at today, the weird, alien race have solidified their place in the format.

Take a look at today’s offering.

Cody posted this list to his Facebook page after going 11-4 with the deck at Grand Prix Vegas, then winning a Modern Open at Vault Games the following weekend. One thing I love about the deck is that it incorporates the Processor mechanic. While there aren’t any copies of my boy Blight Herder, the inclusion of 4 Wasteland Strangler is something special. It’s great against a lot of the top decks, and being able to sneak one out on turn 2 is a solid strategy.

While I ultimately think there are some debatable choices in the deck, I can’t argue with wanting to play black and white in this format—the color combination gives you access to the strongest sideboard options and disruption available, along with some of the most powerful creatures in the Eldrazi.

Let’s see how the deck fares, then we can take a closer look.

So let’s talk about the two decks I lost to: Burn and U/W Control. Week after week, I try out white decks, and week after week I recommend specific cards in the sideboard. I don’t even feel like I have to write them out—you probably already know what I’m going to say!

Let’s look at all the cards that Leyline of Sanctity shuts down: Thought-Knot Seer, Inquisition of Kozilek, Thoughtseize, Tidehollow Sculler, Wasteland Strangler, Relic of Progenitus, Collective Brutality. That’s 21 main deck cards that are neutered by Leyline. How many answers do you have for it, or other troublesome artifacts like Ensnaring Bridge and Blood Moon, in the sideboard? Two: 1 Ratchet Bomb and 1 Cast Out, the former of which is extremely slow. If you don’t draw either you’re basically playing half a game. Can we please show enchantments and artifacts some respect?!

Similarly, I would love more answers to Burn, but it simply might not be a large enough portion of the metagame. More access to life gain could help, but to be honest I’m already a big fan of all the sideboard options, though I don’t like Engineered Explosives when my maximum is 2 colors. The Kalitas, Traitor of Ghet also seems a little random (and expensive), considering a good deal of my removal doesn’t “kill” creatures, but rather exiles them. 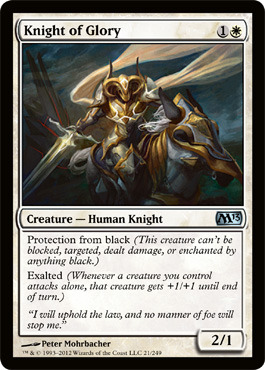 While I love the Knight of Glory, a card that seems perfect in Modern right now, I wonder if this would be better as Auriok Champion. They not only gain you life, but they can also dodge Lightning Bolts and block for days against several other decks—but the 2 white mana might be a little problematic. Unfortunately, nearly every other option in this area also has 2 white symbols, unless you want Timely Reinforcements. Another option is of course your own Leyline of Sanctity. Just something to consider.

As usual, I was thoroughly impressed by the deck, and cards like Thought-Knot Seer, Reality Smasher, and Eldrazi Temple are just as powerful as ever. Thanks so much for reading and I’ll catch you next time!